Is There Anything Better Than Candy? (A Homeschool Crew Review) 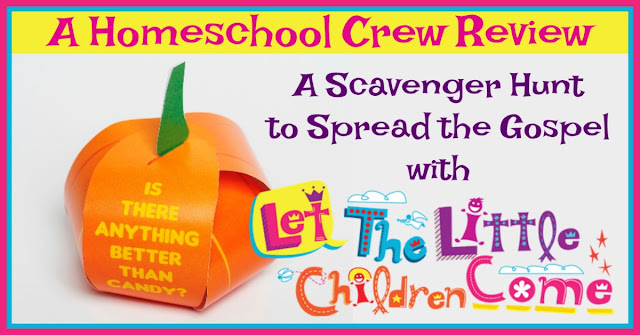 Let The Little Children Come specializes in evangelical tools and resources aimed to spread the Gospel to children by creating materials to both capture the attention of children while also spreading the word of God.  They are unaffiliated with any particular organization or church but believe the Bible to be the inspired, infallible Word of God, and the supreme and final authority in all matters of faith and conduct.

Is There Anything Better Than Candy? Box-Tracts are small boxes ready to be filled with small treats and passed out for Halloween or at fall festivals.  When assembled, they are shaped like small pumpkins that unfold to reveal the not only the treat but the message inside.

Each tract is a single piece printed on perforated cardstock roughly 8 1/2 x 8 3/4 inch square.  The flower shaped middle portion is then easily punched out in order to be assembled.  The instructions for assembly is printed in black and white on the excess cardstock. 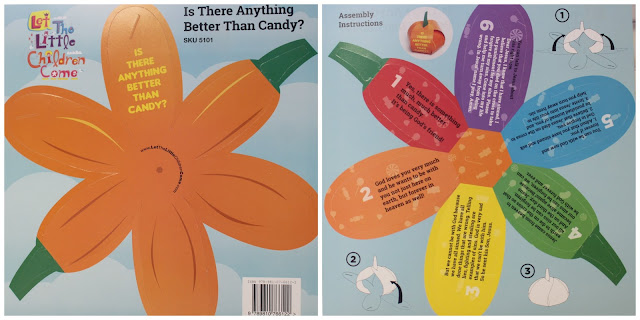 When assembled, the small pumpkin is roughly 3 inches across and 2 inches tall.  This is size enough to put a few pieces of single serving Halloween candy such as fun size snickers or twix bars if placed in at an angle, since the bottom of the pumpkin is a bit smaller than the middle.  The tract is held together simply by placing slots punched on four of the petals over the two pieces of stem found on the two remaining petals. 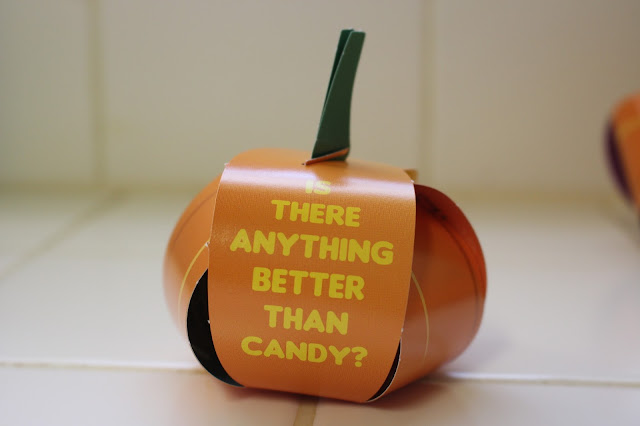 The text inside is written simply for a child to understand and describes how Jesus came to the world to die on the cross for our sins and the steps we need to take in order to accept his salvation to be with him in Heaven.  The sixth petal then includes a very simple prayer a child can use to begin to converse with the Lord.  The six petals are colorful, bright and eye catching.  What's Better Than Candy?? Being God's friend!! 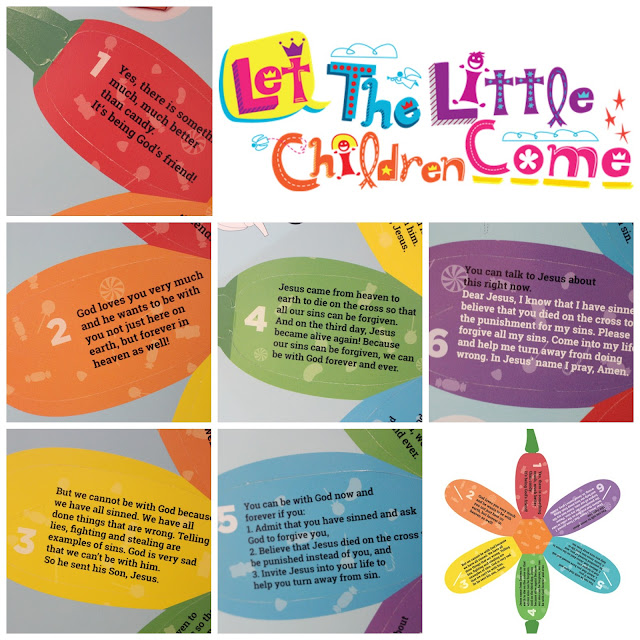 How We Used Them

A current trend here on base is the painting and then hiding rocks for others to find.  Painted rocks can be found anywhere - public areas such as the library or the commissary, in neighborhood areas such as walkways, or in the public parks.  When rocks are discovered, the finder has the choice of either keeping the rock or to re hide the rock in another spot to be found again.  We've been participating in painting and hiding the rocks for a while so we decided to include a few of the pumpkin box-tracts when we hid our latest bath of rocks, adding a sweet treat along with the discovery. 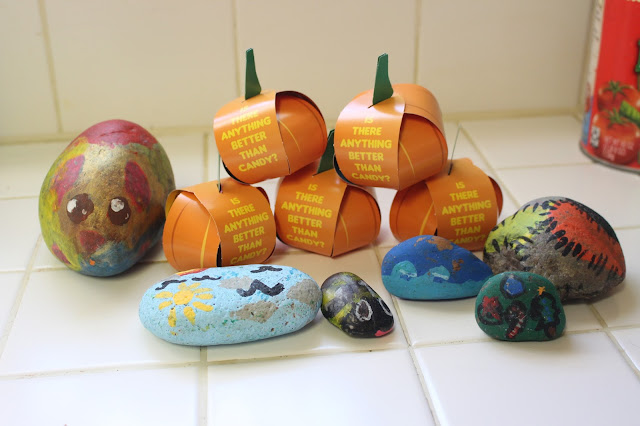 The box-tracts, when assembled, are big enough to hide a few miniature candy bars or pieces of hard candy.  Since we live in the desert and the temperatures here have still been in the triple digits, we opted for placing a miniature box of Nerds candy in each to avoid the candy melting and to also provide a candy small enough to avoid choking hazards if found by a smaller child. 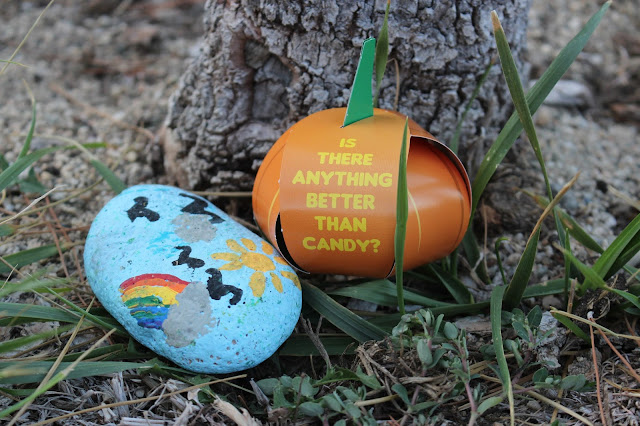 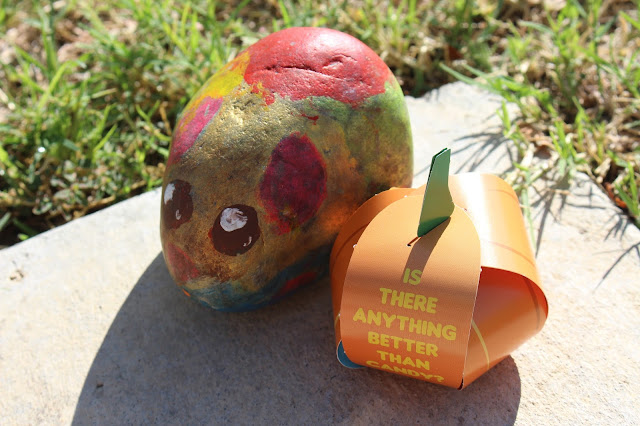 Then, we sat back and waited and we monitored a facebook group for the hiding and finding of rocks on our base. 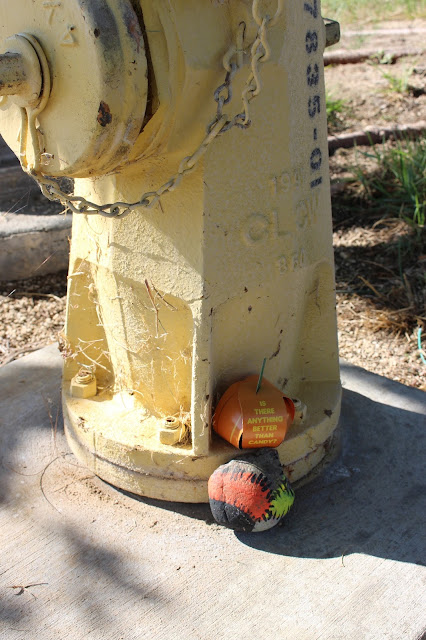 One by one, each of our box-tracts were located and reported on the group.  The general opinion was how cute the small pumpkins were and what a wonderful surprise for their children to find them.  A few people reported that they would be refilling with their own treats and rehiding them along with the rocks. One person was very curious who had hid them so that they could get some of their own to pass out as well. All five tracts were found and at least two more have been put back into hiding, passing the message and the joy of finding them to others.

Since we only placed 5 tracts out with our original pass, we will continue to place 5 out along with each batches of painted rocks we put into hiding.

These tracts are really cute and have been a bit of a hit on the base, whether because of the addition of candy in the hunt, or just the uniqueness of finding the pumpkins in addition to the rocks themselves.  Either way, they have been well received. They would be perfect for passing out at a church "Trunk of Treat" or a fall festival. 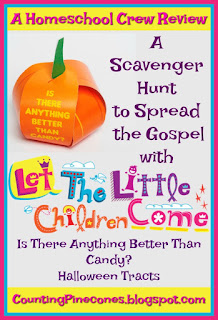 To find more information about these tracts or any of the other tracts sold by Let The Little Children Come, be sure to visit their website. They can also be found on facebook at https://www.facebook.com/LetTheLittleChildrenCome/ .