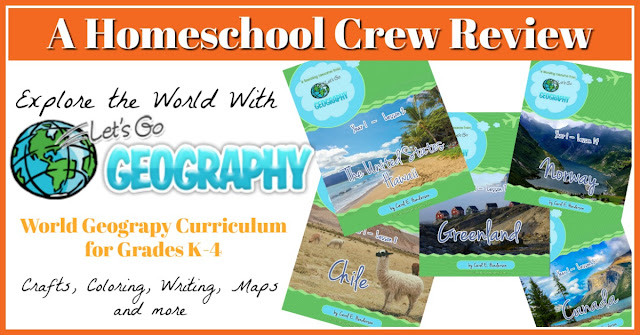 One thing I have always been disappointed in with the public school system here in the United States is that world geography tends to fall to the back burner in the course of education.  Schools often teach State geography for the state the child is located as well as the states of our own country, but when it comes to world geography, very few students who graduate from high school can locate countries like Germany and Ireland, much less all 195 countries that are recognized today.  When searching for a geography course for the kids, I was really disappointed that most curriculum covers more of what would be considered biomes like deserts and swamps or geographical features such as what are mountains, rivers, and lakes but very few curriculum out there focus on teaching students to identify foreign countries on the map. This was something that was very important to me to teach my children and was extremely excited when we were given the opportunity to review the full first-year world geography curriculum from Let's Go Geography.

Let's Go Geography is world geography course for grades K-4th (although, in my honest opinion, older students can benefit from it as well). Lessons are written by Carol E. Henderson, a mother to five now-grown high school students who currently works as a geography teacher.  Providing a tour of the world, the course breaks down into three full years of 36 weeks each (with four weeks of breaks built in each year) to cover 79 countries on all seven continents, with 6 weeks focused on regions of the United States (two regions per year).  Years are broken down into two semesters.Purchasing options are available for both the full year subscription or per semester to help a variety of budget options (and coupons are available for discounts). 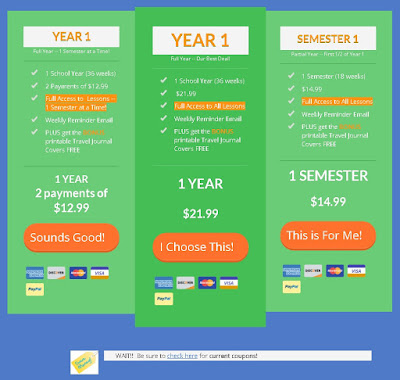 Each lesson takes about an hour to complete and includes five chapters for each country.  A sixth chapter includes printables needed for the lessons.  Each chapter includes various activities and crafts that help introduce the student to the geography and culture of the country. 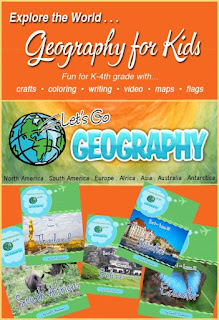 Chapter 1: Map It! -  Basic map work invites the student to locate the country on a world map,  identify major cities of that country, and also countries and large bodies of water that share borders with that country.

Chapter 2:  The Flag - Students learn to identify the countries national flag and learn about what symbolism of the country is represented.

Chapter 3: The Music - Students are given the opportunity to listen to each country's national anthem and are provided the lyrics.

Chapter 4: Let's Explore -  Historic landmarks, tourist attractions, culture and people from the area are all explored through videos, photography, and facts. Additional supplemental reading material is also listed in this section.

Chapter 6:  Printables - This final section provides additional printables such as notebooking pages, coloring pages and printouts of the flags suitable for a larger classroom setting. 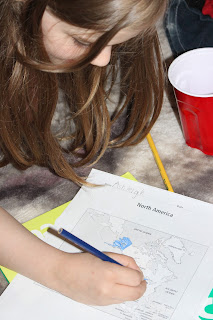 format.  Each weeks lesson is located online at the member's website and can be downloaded in PDF format to be used. These lessons, which are roughly 25-30 pages in length, can then be printed out or they can be viewed from a computer. A few lessons I even downloaded to my Kindle, however, the PDF reader on Kindle readers do not allow for clickable hyperlinks which means that links for National Anthems or videos are not useable. For this reason, I do not recommend using them on Kindle readers.

For our schedule, we split these lessons over the course of 5 days, doing one section per school day.

Map work is always a favorite in our house. For some reason, the kids really like maps.  Let's Go Geography includes plenty of map work if your kid is a map fiend like my own are.  Each country lesson typically includes two maps to work with - one of the continent that the country is located so that the student can see the country in relation to the region of the world it is located and a second map that is more specific to the country that shows the capital city and other larger cities. 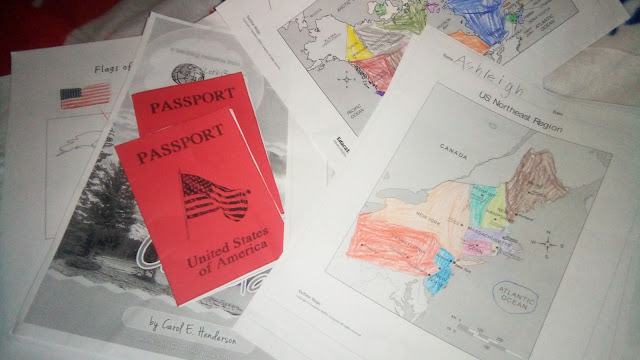 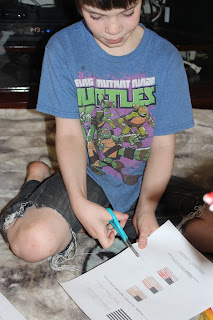 Students are also able to color flags which they then paste onto a third map and then draw a line to that country.  So, honestly, it's more like three maps per unit, although, this particular map is shared and used through various lessons.  Students can also print out the optional passport in which they can paste the flags for the countries they visit in the corresponding area of that country.  This is a really cute little extra but does cost a few dollars extra in addition to the subscription.  The kids have really begun to look forward to the day when we get to cut out the flags (they color them on Tuesday when we learn about the flag and its symbolism and then I would allow them to cut the flags out on Friday where they could place it both on their map as well as into their passport at the end of our lesson. 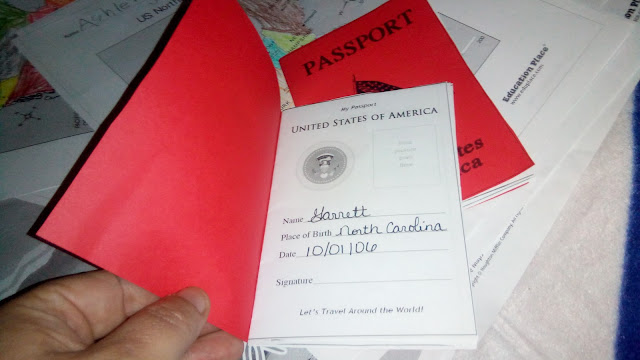 Fridays also meant it was Create! day, which had included some pretty neat little crafts that tie in with the lessons they have learned through the week.  For example, for our first lesson about the Northeast Region of the United States, we talked about Maine and the many lighthouses that can be found along their rocky coastline.  To tie into this, we made a really quick lighthouse using a red solo cup, a battery-powered tealight and a water bottle. 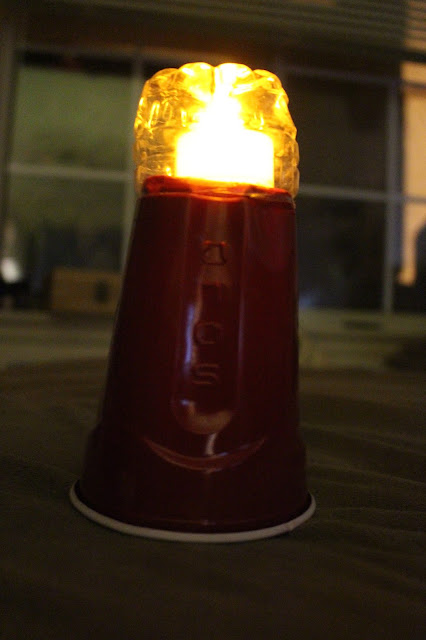 For the second lesson about Hawaii, we could have opted to make a paper lei. Unfortunately, I didn't have some of the necessary materials (more colored paper, yarn and pony beads) and did not have access to purchase them on base, so we did skip that project and instead just opted to color the coloring page which featured a green sea turtle and black coral.  However, the following week, we had a really neat project were they were to paint around a template of a maple leaf to represent Canada. The kids decided instead of using paint to use black paper and their sidewalk chalks and created a really cool "Negative effect" picture that they were realy proud of. Ashleigh even made hers to look like the Canadian flag with red and white. 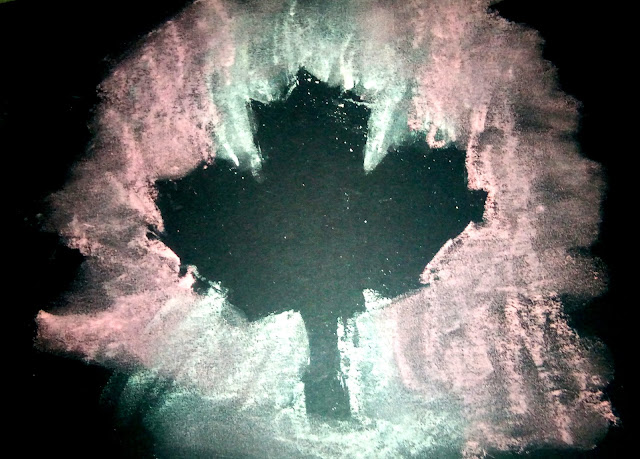 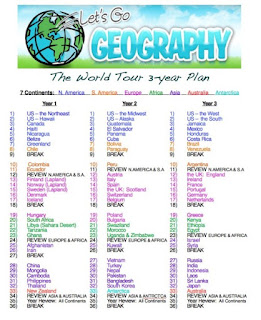 I was really impressed with the choices that were selected for the videos that accompany the lessons.  For example, the video for the Star Spangled Banner is of the Combined Military Academy choirs,  one of the videos for Canada features native people from Nunavut, and the video for the Haiti national anthem shows school-aged children singing their national anthem in French (with English translations for the subtitles). I would have preferred to have the video links to route to Safeyoutube or a similar site rather than to Youtube as while the videos themselves were perfectly appropriate for all ages, many of the comments on the videos were not.

Overall, I've been really impressed with this curriculum and it has fulfilled my search for finding a grade-appropriate world geography program that actually teaches the countries of the world.  Currently, only Year 1 is available but Year 2 and Year 3 will be available in the future. A recent study showed that 11 percent of young citizens in the US couldn't locate the US on the map, 29 percent could not locate the Pacific Ocean, 58 percent failed to locate Japan, 65 percent could not find France and 69 percent could not find the United Kingdom. I personally do not wish for my kids to be part of those statistics, that's why I'm very glad to have a quality program like this available to teach the kids where those countries are located, plus many, many more. 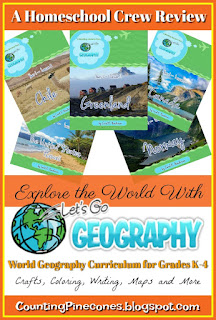 To learn more about Let's Go Geography, please visit their website. You can also find them on the following social media platforms: