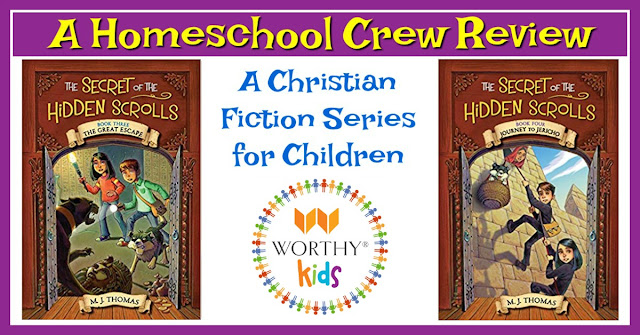 I love books that not only grab my kids attention but teach history in such a way that it pulls them into the story.  When that history accurately portrays Biblical events in a simple way that the kids can understand, even better.  You may remember that the kids previously reviewed and enjoyed the first two books of the The Secret of the Hidden Scrolls series from  WorthyKids, an imprint of Hachette Book Group.  This time around, we have been reading books 3 and 4 of the same series and picking up the story of Peter, Mary and their dog, Hank.

Book Three - The Great Escape ( ISBN-13: 978-0-8249-5689-9)
Peter, his sister Mary and their dog Hank journey to ancient Egypt. When the trio become friends with Pharaoh's daughter, they witness first-hand as Moses petitions Pharaoh for the Israelites' freedom.  Plagues wreak havoc as the group race to decode the scroll, gets chased by a panther, and battles Pharaoh's cunning advisor as the story of the Exodus comes to life.
Book Four - Journey to Jericho  (ISBN-13: 978-0-8249-5692-9)
With limited time to solve the secret of the scroll, Peter and Mary join Israelite spies on a reconnaissance mission to Jericho; sneak Rahab to safety; and ultimately face the scheming man in black as the walls of the city begin to crumble. 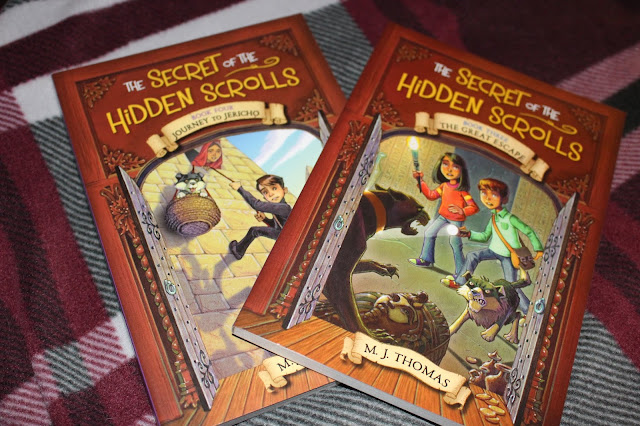 The Secret of the Hidden Scrolls is a series of children's books written by author M.J. Thomas who came up with the idea to write them after his lack of finding books to read to his young son that would teach the Bible in a fun but imaginative way. Having graduated with Bachelors degree in Biblical Science from Liberty University, he set out to write a series of children's books that withheld to Biblical accuracy in combination with characters and adventures that would capture the imagination of young readers.
The end result is a series of time traveling adventures that follow the story of Peter, his sister Mary and his dog Hank as they unlock the mystery hidden inside a collection of scrolls discovered by their archaeologist Great Uncle, Solomon.  Each scroll transports the trio to a significant event in the Bible where they have seven days to decipher the message in each scroll.
Each paperback chapter book is relatively short at roughly 100 pages with cute black line illustrations. and are geared at readers aged 6-8 years old.  In addition to helping readers learn about popular Bible stories, these books also cover topics children can relate to such as sibling rivalry.

My kids love the story of the fall of Jericho.It's actually Garrett's favorite stories of the Bible.  I love watching him act out the marching around the walls, blowing the trumpets and the triumphant shout.  So even though "Journey to Jericho" is actually the fourth book in the series, we read it prior to reading book 3 "The Great Escape".  We didn't need to read the books in order to follow the story, although there was reference in the fourth book  to the children meeting Joshua in the previous book.

Ashleigh and Garrett were already familiar with the premise of these books, having read books 1 and 2 for a previous review.  These two books follow the same two children, Mary and Mary, along with their dog Hank as they are drawn directly into stories from the Bible to witness the events firsthand.  Along with the help of the Angel Michael, the children must discover the secret hidden within the archaeological scrolls found by their Great-Uncle Solomon within 14 days or risk being trapped in Biblical times for the remainder of their lives.  Each story find the children facing the man

The kids really enjoyed books 1 and 2 and books 3 and 4 did not fail to delight them once again.  Reading the stories out of order did not create a problem as we were already familiar with both stories (The exodus from Egypt as well as the fall of Jericho ) but even children who might not be quite as aware of the stories would be able to follow along the story and understand without reading the previous books.

Both books contain 120 pages with black line illustrations scattered throughout the pages.  At the end of each book is a 2 page collection of suggested passages to read from the Bible along with description of what each passage refers. For example, the suggestion of Exodus chapters 3 and 4 let the reader know that these passage tell of God speaking to Moses from a burning bush and telling him to lead his people out of Egypt.

The reading level for both books is for grades 1st - 3rd, which while Ashleigh reads well above this grade level, was the perfect reading level for my son who struggles with language arts.  The font size also proved to be perfect for him as well which was really great for him as often he has problems following along and losing his place while he reads. The chapters are short and the text is broken up with the line drawing illustrations which helped give him confidence when he was asked to read aloud.

We really enjoy these books and would highly recommend them for your family library. 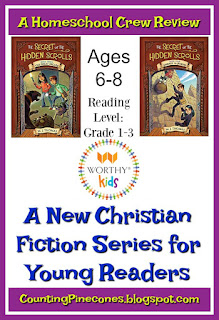 Be sure to click the banner below to read more reviews on these two books by other Crew members.

Posted by Brenda Prince at 9:32 PM