What's in the Skies This Month - February 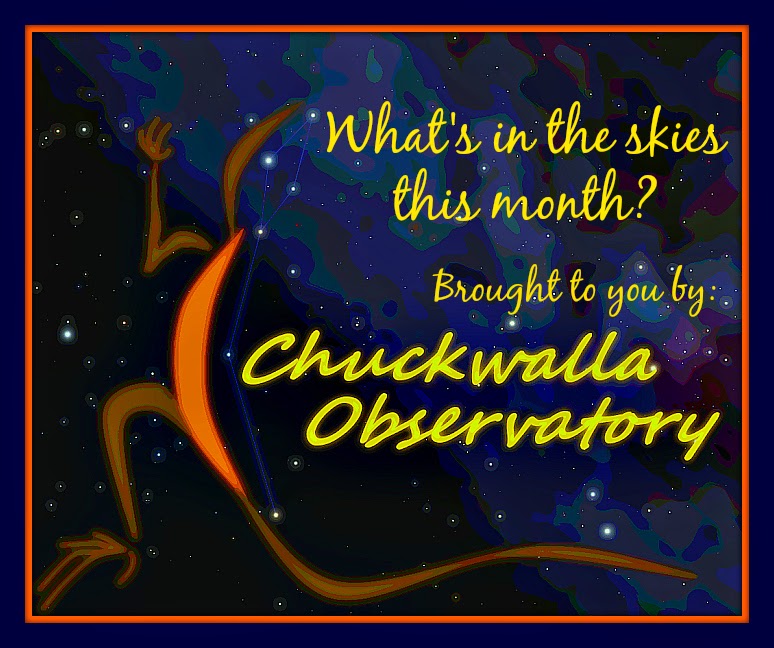 Counting Pinecones has asked if I would be interested in writing occasional articles and doing Q&A sessions in regards to amateur astronomy and night sky observation.  Those of us involved in Amateur Astronomy are a very tight knit group and we are always more than happy to help spread our knowledge so I am more than happy to help contribute.
First, a quick introduction. My name is Charles and I run Chuckwalla Observatory out of the Mojave Desert. I have been involved in amateur astronomy for the past decade. Like most starting with astronomy, my fascination with the night skies started with a small telescope similar to what many families buy their children for Christmas. Over the years, that passion has led to bigger and better telescopes and equipment.  Amateur astronomy is a hobby anyone can get into. All you need is the eyes you were given and the night skies to get started with. My goal is to help keep you informed with upcoming celestial events that are easily observed either with the unaided eye, a pair of binoculars or a small telescope. It is my hope in doing so that your children will become the next generation of amateur astronomers.

Here's what's in the sky for the month of February.

Feb 3 will see a Full Moon. This is a poor time for galaxy and nebula observation as the light of the full moon is so bright. You will still be able to see planets however. Venus is very bright in the early evening sky and second to the moon is easily the brightest object in the sky.  When observing the moon with a telescope during this time, try using a neutral density filter on the eyepiece to reduce brightness and increase contrast of lunar features such as craters and valleys.
Feb 6 is the opposition of Jupiter which means that Jupiter will be directly opposite the Earth in it's orbit around the Sun at this time. This is the best time to observe Jupiter because of it's proximity to Earth and large apparent size. A moderately sized pair of binoculars will reveal the Galilean moons as small dots on either side of Jupiter. A small telescope may show you surface features on Jupiter such as cloud bands and the Great Red Spot.


Feb 18 is the New Moon. If you own a telescope, this is the best time to observe galaxies and nebulae due to no moonlight to compete with the light from deep space objects.
Feb 22 will see Venus and Mars in Conjunction. The planets Venus and Mars will appear very close to each other in the sky on the evening of Feb. 22. Look to the west after sunset to spot two bright "stars" very close to each other near the horizon. The brighter "star" is Venus, the dimmer one under it is Mars.

Feb 24 is the greatest western elongation of Mercury. Because Mercury is a inner planet like Venus, it never strays too far from the Sun which makes it difficult to observe.  It will be at greatest western elongation on Feb 24, meaning it will appear to be furthest from the Sun's western side at it's farthest point above the horizon. This will be the best time to observe Mercury, at approximately one hour before sunrise. 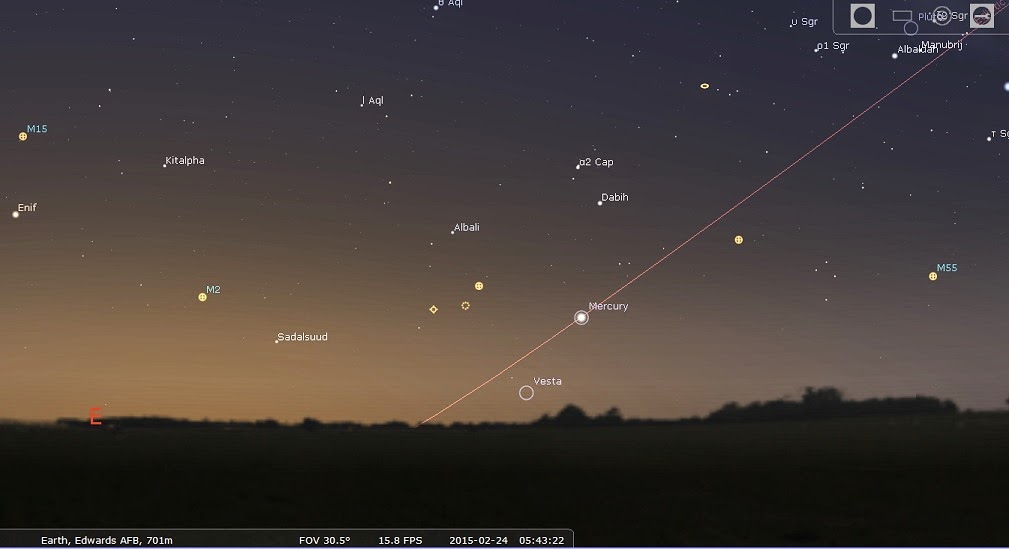 For those with binoculars or with telescopes, Comet Lovejoy (2014Q2) is still available for observation. While it is past its prime viewing window and will increase in magnitude as it travels further and further away from earth, it is still out there waiting to be found.  The Sky Live is a great website to help you track where the comet is located in the sky.