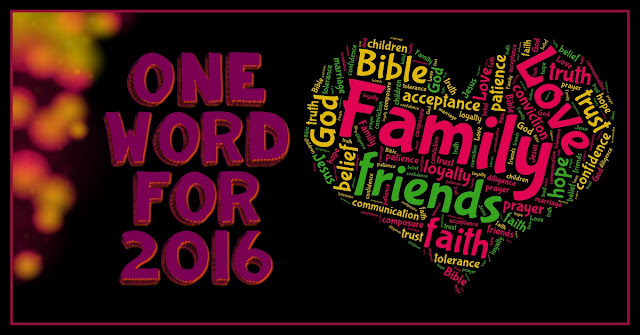 It hardly seems like it's been a full year since I sat down and write this very same type of post for the start of 2015.  Now, the confetti has been swept up, the champagne drank and the crystal ball dropped as revelers rang in 2016.  So to all of you, welcome to the New Year.  Now we all get to enjoy the 6 months of frustration as we have to write over or scratch out the 2015 on everything we date.

Like last year,  I have chosen a word to focus on for the year. A word that signifies something that I feel I need to pay close attention to, that I need to devote more time and effort into doing, or something that I feel I have neglected to make the necessary devotion towards.   Originally I was going to recycle the same word from last year - Prayer.  I'll be honest with you - I came no where near devoting enough time to speaking with the Lord this year - I was downright neglectful. Because of this, I felt this would be a good reason to once again focus on this same word.

But as I sat and began writing this with the word "Prayer" in mind, God pressed something else upon my heart.  I realized that I was neglecting not only having those one on one conversations with Jesus but with everyone else as well.  Yeah, sure, I talk to my husband and my kids, but I don't really communicate with them.  We say "How was your day" and give a brief 10 second answer of "It was fine, what's for dinner?"  We might show each other a Youtube video or a meme on Facebook, but we really never talk about the important stuff - the meat and potatoes, if you will.

We've become a typical 21st century family - everyone's nose is buried in their electronics, whether it's the television, tablet, phone or laptop.  We're so wrapped up in those electronics that even when we do speak to one another, nobody really listens to what the other is saying.  The sad truth is, my oldest daughter and my husband know more about what the kids are doing in school through this blog than from our nightly discussions.

My word for the year is :

So there you have it..  While there will be many other things that I plan on focusing on, Communication with those I love and whom love me will be my main focus.