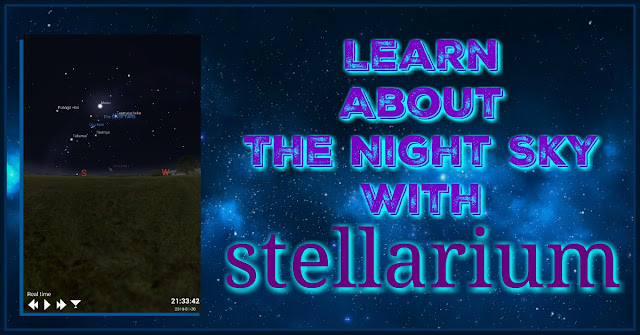 My family has always been big in astronomy.  I remember spending my hard earned allowance savings to purchase my first 4.5 inch reflector telescope from the Discovery Store when I was still in high school along with a sky chart and a book about the night skies.  Many years later, I shared that love of astronomy with my husband became even more involved with it than I was and who later started Chuckwalla Observatory.    Now, we enjoy sharing the love of the night skies with our children.

One of the greatest tools that we use for nighttime observations, outside of the telescope itself, is the Stellarium program from Noctua Software.    If you've followed this blog for a while, you'll probably remember when we highlighted the use of this program during a solar eclipse in October of 2014.  At that time, we were using the PC version of the program, however, it is also available in a mobile version for Android and Apple devices.  While the PC version of Stellarium is a very application heavy program geared for serious backyard astronomers, these mobile versions strip away features that most casual stargazers would not need, making it a very useful app to have.  This app basically puts an entire Astronomy library at your fingertips.

Key Points of the Stellarium Apps for both apple and android devices are:
* a very intuitive touch-screen interface
* the integration of GPS positioning
* the control of the direction of view using the device accelerometers
* a catalog of over 600,000 stars displayed as a real time zoomable sky map
* a catalog of many nebulae and galaxies, with pictures for some of them
* asterisms and illustrations of the constellations for several sky cultures
* realistic Milky Way
* realistic landscape and atmosphere with sunrise, sunset and light pollution simulation
* 3D rendering of the major solar system planets and their satellites
* night mode (red)

Stellarium is a very powerful planatarium app that shows the sky in a realistic 3D display. By simply 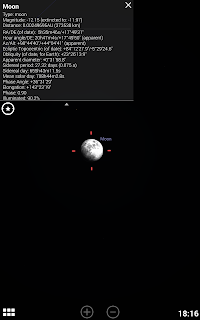 aiming your phone in the direction of the sky that you are viewing, you can quickly use Stellarium to help you identify or locate objects in the night sky with ease.   With a catalog of over 600,000 stars, planets, galaxies and other deep space objects, it's a great program to have for when the kids ask "Mom, what's that". Pointing your mobile device in the desired area of the sky will reveal the stars and planets visible in that direction.  Touching a specific object on the sky map will provide more information about the object, such as magnitude, distance from earth, and type of object (such as variable star, for example).  Clicking on planets or moons will also provide information such as what phase it currently is in and what percentage the surface is illuminated.  More detailed information is also provided.

Real Time timelapse allows you to watch as the objects move above you in the sky which is great for introducing students to the ecliptic path of planets or to see how objects much closer to Earth such as the moon, sun and planets move across the sky much faster than objects further away and outside of our solar system.  Stellarium also shows current locations of many man made satillites currently circling the Earth and we have used it on many occasions to pinpoint the International Space Station's path overhead, making it much easier for the kids to find and view the ISS as it passed over our house.

This program also allows for you to fast forward/rewind to see how objects in the sky will appear either at a future point in time or in the past.   We use this feature most often when we are planning for a meteor shower viewing, so that we can know ahead of time where the moon will be located in the sky, what phase the moon will be in at the time and where the showers radiant will be in the sky.   This is also a great way to show students how the skies change with each season.

There are many other educational aspects to Stellarium that can be used in a homeschool environment.

Many times, it is hard for children, especially younger children, to view the stars in the sky and picture a lion or a warrior from the pinpoints of light.   There have been so many times that my kids will look at the big dipper, for example, and still not understand how it's a representation of a bear.  With Constellation art turned on, Stellarium puts a gorgeous skin over the sky chart, providing a great visual for students to actually see rather than just imagine. Key identifying stars are labeled on each drawing making it a great way to learn constellation identification.  The artwork itself is pretty gorgeous and the kids really enjoy finding each one based in the sky on a picture they really like on the sky chart. 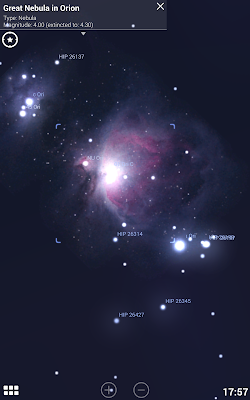 Deep Sky Objects such as planets, galaxies and nebulas are easy to zoom into for a closer view.  There is also a search function that allows you to quickly go to their location for objects not yet visible in the sky.   Once again, the visuals are stunning, although not as high definition as what is available on the PC version.  This makes for a handy tool when you're out in the middle of nowhere camping and Google is not an option.

Another educational feature of Stellarium is the StarLore feature.  Many cultures, ranging from the Aztecs to today's Western culture, have had different stories and beliefs when it came to stars and the night skies. Skylore allows you to quickly switch to between various cultures such as the Aztec, Chinese, Norse and different Native American tribes like Navajo and Inuit and view the skies as they did.  This proves to be very interesting when comparing constellations that we are very familiar with to other cultures. For example, Orion to us was the Cat's Cradle to the Polynesian people and the Fisherman to the Norse.


There are many other astronomy applications out there and we have tried many of them but we always seem come back to Stellarium as we find it to be far superior to other applications on the market.  It runs smoothly on our phones as well as on the Kindle Fire (although there is no GPS abilities with the Kindle).  We've used it for tracking both Solar and Lunar Eclipses, identifying planets and stars in the sky and finding the ISS as it streaks above our house at night.

While the PC version is a free download (available for Windows, Apple OS and Linux), there is a small cost for the Mobile versions. You can find the Stellarium Mobile Sky Map for $2.49 at the Amazon App Store, $2.49 at the Google Play Store and $2.99 on Itunes.   More information about the PC version can be found on Stellarium's Website at  http://www.stellarium.org/en/.

This posting is part of the Schoolhouse Review Crew's App Schooling (iOS and Android Apps) Roundup.  Click the banner below and check out what Apps other homeschool families are using in their homeschool.

Posted by Brenda Prince at 2:34 PM