Blasting Off: Learning About Alan Shepard (A Schoolhouse Crew Review) 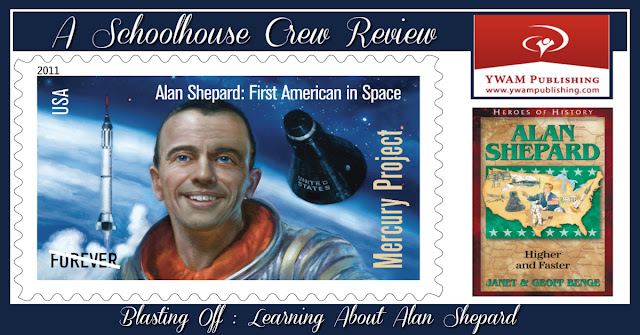 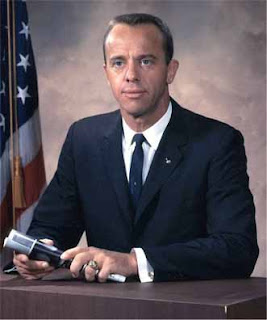 Ask a child what they want to be when they grow up and you'll hear many answers:  a police officer, a fire fighter, a veterinarian, or maybe even a doctor.  The great thing about being young is they can dream about being anything they want to be, including becoming an Astronaut.  However, for Alan Shepard, such an idea was completely out of the realm of possibilities when he was growing up. When he was 9, he never would have guessed he would one day become the first American in Space.

The last few weeks, the kids and I have been studying and learning about the life of Alan Shepard and the great Space Race while reading the book Heroes of History- Alan Shepherd: Higher and Faster by Janet & Geoff Benge from YWAM Publishing as well as using the corresponding Downloadable Unit Study Curriculum Guide.   My kids were completely ecstatic when we we were selected to review this material as they really wanted to this book for a while and they have not been disappointed one bit. 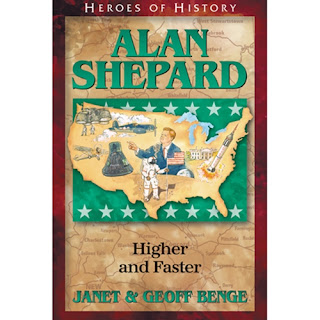 Last year we had the opportunity to review another book by YWAM, so we were already familiar with this wonderful company. For over 18 years, YWAM is known best for their biographical books ranging from their Heroes of History series and their Christian Heroes: Now and Then series.   These books weave the story of historical figures so vividly that children will discover why these were the heroes of the children of yester-years.  It also leaves parents wishing that today's "heroes" had the same values that inspired children as they did back then.

The book that are reading, Heroes of History- Alan Shepherd,  is a 240 page paperback written for ages 10+.  Written in a narrative format that makes what could be the very dry subject of history come alive,  we found the book to be engaging and even Ashleigh found it interesting and learned so much. 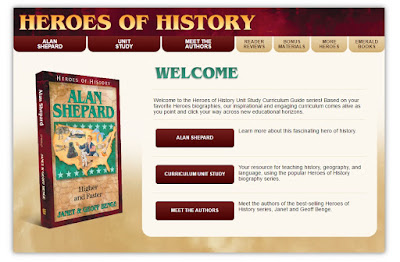 In addition to the book, we also were asked to review the Downloadable Unit Study Curriculum Guide.  The 84 page guide is filled with comprehension questions, quotes perfect for copy work ideas, printable activity sheets, vocabulary and creative writing activities,  suggestions for tying subjects such as art, geography and math lessons in with the story and additional book and movie suggestions to go beyond the book.

We really enjoyed using many of the ideas that were suggested by the curriculum study guide, which takes students beyond just a story in a book and could easily make a solid unit study.   My children enjoyed mapping Alan's military journey (which also included a couple of test flights here at Edwards Air Force base which was called Muroc Air Base at that time), drinking Tang out of bags with a straw like an astronaut would, eating freeze dried ice cream, and watching The Right Stuff. 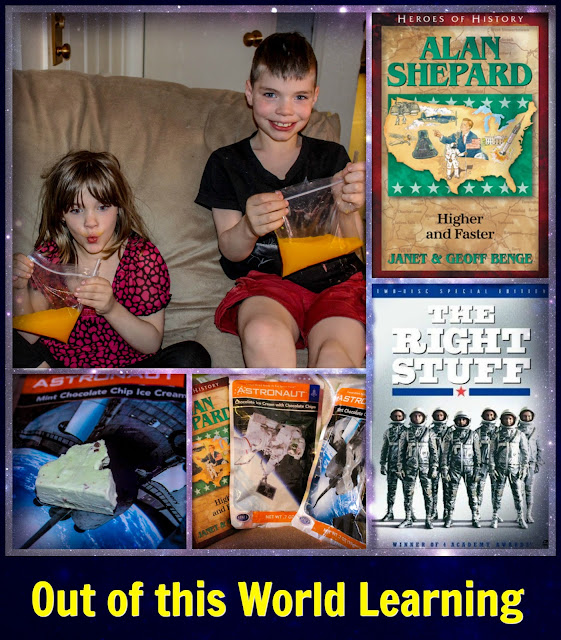 The book itself works well for families who follow a Charlotte Mason style curriculum and would easily be considered a Living Book.  Great depth is given to even the most trivial of information, such as how many miles worth of hallways are found in the Naval Academy in Annapolis or the details as to why the USAT Holbook is called the Stinkin' Old Holbrook.  Every chapter is filled with these details in regards to locations,  aircraft and people and the kids and I were constantly looking up things on Google so that they could actually see things that sparked their interest.  One chapter had us learning in depth about arresting landing on air craft carries  while another chapter we were learning about mid-air refueling of aircraft.   So while we're learning about the life of Alan Shepard, we are also learning about various other topics such as the history of aviation, World War II, the breaking of the sound barrier, the Space Race, Sputnik 1 &2, Yuri Gagarin and the Mercury 7.

The book is pretty short and easy to read, consisting of eighteen chapters. The chapters range from about 10-16 pages each which makes it easy for us to read one chapter a day and then dedicate a bit of time to discussing what we read and doing additional activities.

YWAM publishes some wonderful books and I plan on purchasing others in the near future (at the time of this writing, they are having a sale and many of their books are priced at $7.50/each).   These books would make great supplemental reading for many American History and Religions History topics as well as great independent reading for students who enjoy biographies.

For more information about YWAM Publishing be sure to visit their website or on one of these social media platforms.

YWAM Publishing was very generous and gave 100 members of the Schoolhouse Review Crew their choice of 28 different book titles from both the Heroes of History and the Christian Heroes series along with the corresponding study guide.  To read those reviews, be sure to click the banner below.

Posted by Brenda Prince at 7:54 AM