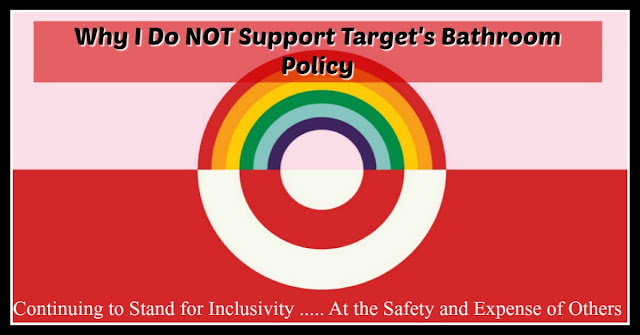 In the past few days, there has been much discussion in regards to the Target bathroom controversy.  If by some chance you live out away from all social media or news (although, if so, you probably wouldn't be visiting my blog.. haha), basically what has happened is that Target has made it store policy that anyone can use the restroom or dressing room that corresponds with the gender they identify as.  This is their way to better accommodate and to not discriminate against members of the Transgender community and while I can see their reasoning, I think it's the wrong decision.

This is a subject I have been fairly vocal about on my personal facebook page but really had no intention of carrying over to this blog.  Shortly after Target made the announcement, a friend of mine from high school posted that anyone who posted anything in regards to it would find themselves unfriended...

Yeah, it was pretty immature of me, but after already having 2 people unfriend me because of a picture I had posted earlier, and last summer having another friend who unfriended me because I didn't change my profile picture to the rainbow overlay to support Gay Marriage after that law past, I was seriously tired of being told what I could and could not post or that I HAD to agree with something I didn't in order to be friends.   So, I admit, I posted the post that I will also post here as a way to say "I'll post what I want"..  I did not think my post was Trans-phobic, hate mongering or discriminatory in any way shape or form but sure enough, within 25 minutes, my friend had unfriended me..

However, a crazy thing happened.. After posting my opinion, the post took on a life of it's own. Another friend asked if I would make the post public so they could share.  People started commenting that they related to and agreed with my opinion and before I knew it the post had well over 6K shares.

Last night, Facebook took my posting down and said I was in violation of their guidelines as they considered what I posted Hate Speech and Bullying of others.   I do not feel my post violated these guidelines at all but instead I feel that as the popularity of my post grew, since it was against the progressive thought of whatever agenda, they removed it.   Basically, I feel they took away my right to voice my opinion not because it violated any guidelines but instead because it didn't support LGBT rights.

I was asked to repost the posting on Facebook so that it could again be shared but I know that if I did, it would only be removed and my account suspended since I had already been reprimanded for the post.  I also had people suggesting I put it on Reddit but as I don't ever use Reddit, I have no clue how that works.  Instead, I am opting to post it on my blog, where Facebook cannot judge if it is or isn't against their guidelines.

I am going to add one thing to this that I did not add to the original - many people said I obviously didn't care about my son since I didn't address the men's room, hence that I was just hiding behind a homophobic agenda by claiming it was "about the kids".. I have three children, the first of these are an 8 year old daughter, a 9 year old autisic son. These children do not go into a public restroom without either myself or my husband with them.  My third child is a nearly 17 year old daughter who is capable of using the restroom alone and I am not always there with her when she is at a public business.    When I wrote this, my mind was thinking about her and not my son as my son is constantly protected for the time being.

I'm all for the safety of others. People should be able to use the restroom without fear.  Other than sex, using the restroom is one of the most vulnerable activities we can do.  I do believe Transgenders should have a safe place to relieve themselves but this should not be at the expense of others.  I'm all for unisex bathrooms. I am not, however, able to support a policy that states that a women who might already have fear issues after being a victim, now has to worry about a burly man following her into a dressing room and assaulting her.  And it's not just about pedophiles and rapists - what will Target do when an ex husband or a stalker follows a woman into a bathroom in their store and leaves her dead.  Yes, these things have already happened in the past but prior to, if someone saw a man entering a woman's restroom, it would raise eyebrows and security would most likely be called.  This might at least deter this type of situation. Now, that same man can enter a woman's restroom and people will fear reporting it because they don't want to be seen as a bigot or homophobic, the two top descriptions thrown around at anyone who is opposed to these types of policies.

Equality is exactly that, two things being equal on all footing.  Equality for one group does not come at the expense at the safety of another group.

As I have had in the last 24 hours a couple of people unfriend me because of the picture I posted in regards to the bathroom issue and I just saw another saying they will unfriend anyone who posts against it,  let me point something out.  Yes, I am against this whole Target Transgender bathroom deal but not because of transgenders..  If we could somehow guarantee that each XY Chromosome that entered the female bathroom believed they were really a woman, maybe it wouldn't be an issue. However, there's no way to vet that each man who walks through the door is just an extra hairy female who wants to pee and lets face it, there's alot of sick MoFos out there.  When we talk about predators, we are NOT calling the LGBT community predators, we're talking about those that your nightmares are made of. 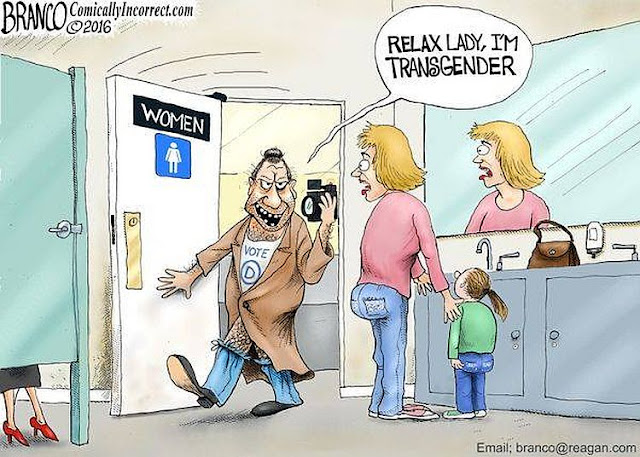 My father currently sits in a prison cell in Texas for being a child molester and a pervert. I can show you in a letter where he said he wishes such laws existed when he was free as he would gladly say he was a woman if it meant following a cute 10 year old in the bathroom.  I've LIVED with the type of sickos that are salivating at the chance to do exactly that. My father is not a transsexual, he's not bi sexual, he's not gay. However, he is a sexual deviant and he's more than happy to walk into a bathroom with your cute preteen daughters and he's more than happy to masturbate to your sweet 7 year old daughter.  THIS is who you're fighting to allow into your bathrooms, because the law says all he has to do is say "I identify as a woman", even though he doesn't, and he can go into the bathroom with your daughter.

It's not about the LGBT community, it's about keeping our kids safe and keeping women safe and not making more victims.  And the fact is, TRUE transgendered people are so engrossed into their lifestyle that you can't tell them from natural born men or women. Most of the trans women I've seen do their makeup way better than I do, fix their hair better than I do and wear a dress WAY better than I do. Why?? Because it is NOT a passing fad to them, it's their life.. And they aren't questioned when they walk into the women's bathroom because their outward appearance reflects the lifestyle they live. If it looks like a duck and quacks like a duck then hell, welcome to the club.  And if that were the people we were talking about, this wouldn't be an argument because lets face it - they've been using our bathrooms for YEARS and nobody has said a word.

But we're not talking about true 100% transgenders.  We're talking about a group of people who just claim that one day they can feel like a woman, the next moment they feel like a man, and so they have been given the right to use a women's bathroom upon a whim.  These are NOT transgendered people, these are people who are trying to fight for a loophole to be allowed to prey on women. I am getting sick and tired of being told I am a homophobic bigot who hates the LGBT community - I'm far from it and I treat everyone equal. However, I am 100% against a law that says ANYONE can simply say they are trangender and walk into a bathroom without question, which is where things are heading right now. And I find it funny that many in the LGBT community are also seeing the problem with this (especially those with children), yet it's those NOT of the LGBT community that are screaming the loudest about hate. Right now businesses are taking jobs out of NC and you see entertainers punishing an entire state (and the people who live in it, who may or may not support these types of laws) for what the government does. These are bully tactics to force people to give in and threatening people that you will "Unfriend" them for not agreeing with this is a bully tactic as well.

If you want to fight for Gay rights, by all mean, do it.. If you want to unfriend me because I don't want a man sneaking in a women's bathroom after saying he's transgender, setting up a camera and recording me while I pee, so be it. (and btw, telling me "that story is from 3 years ago" when it happened WHERE I LIVE at a mall I shop at doesn't hold any weight with me).  I promise, I will survive and so will you.  But, I am not going to stand by and be told I am a bigot towards the gay community when I am seeing the opposite side of a coin and knowing ahead of time the problems that could transpire because of these types of policies. 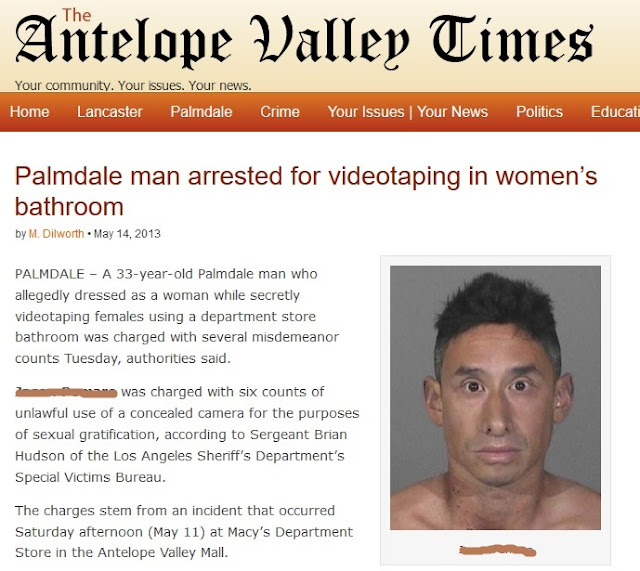 Posted by Brenda Prince at 3:43 PM