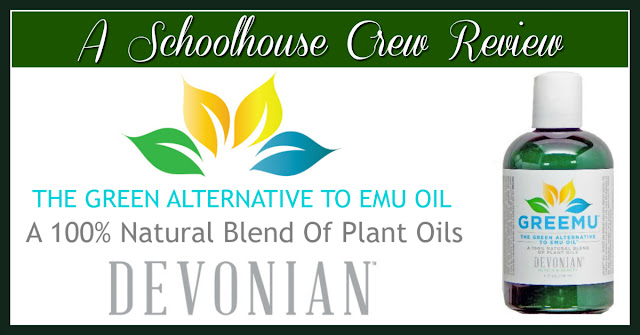 Last year, I had the opportunity to review a product that I absolutely fell in love with from Koru Naturals - their Grade A Emu Oil.  For the past few weeks, I've had another opportunity to try a similar product that is similar to Emu Oil but is a 100% natural blend of pure plant oils.  This vegan alternative is GREEMU from Devonian and is distributed by Koru Naturals and we were given a 4 ounce bottle for our household to review. 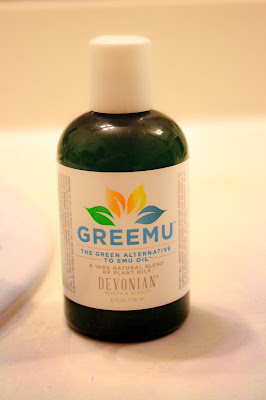 GREEMU is a completely plant based alternative for those who want the benefits of Emu oil but would prefer a product that does not contain animal ingredients.  However, until recently, there were no products on the market that met these requirements that had the same health and beauty benefits compared to Grade A Unadulterated Emu Oil.  Scientists at Devonian spent close to two years working on a formula that while completely plant based, was very close in chemical composition to what is in Emu Oil but without using animal products.

As both my husband and I use the original Emu oil formula on a regular basis, we decided to do a side by side comparison of the two.  Both of used both products without discussing our results until the end of our trial and the compared what we found. 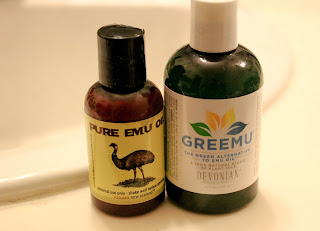 We both agreed that the GREEMU oil takes a slightly longer time to soak into the skin where as the Emu oil seemed to soak in quickly. I felt the GREEMU also felt more "tacky" to the touch even after it soaked in to the skin, something I did like, especially if I was going to apply makeup afterwards.  Also, one other big difference I noticed was that when using GREEMU on my daughter's plaque psoriasis, it took a big more friction and effort to get the plaques to come off -10 something my daughter noticed almost immediately.  After the second try, she would not allow me to use the GREEMU and demanded the original Emu formula instead.  My husband found no other major differences between the two products other than the longer time to absorb into the skin and said that for him, both products performed equally.  One other difference, however, would be the smell - while the original Emu Oil formula has a slightly "birdy" smell to it (think a slight raw chicken skin smell), the GREEMU lacks this odor and both my husband and I find it to be completely scentless.

However, even with all this said, none of these minor differences would have been noticeable at all had we not also been using the original Emu formula and if we were a family that animal produced were not part of our lives, the GREEMU oil would be a great addition to our household.  Both products work well, I just feel the original formula seem to do it just a bit better.

Two other pros for GREEMU is the price difference and the shelf life differences between both products. From a price difference, the GREEMU is going to be your better deal: a 4oz bottle of GREEMU will cost $10.80 ( and you can get an additional 20% off until May 31st by entering coupon code GN395Z10 at the Koru Naturals website) where as a 4oz bottle of Emu oil will cost $18.20.  Also, one should consider the shelf life between the two products - Emu oil has a 1 year shelf life (2 years if the product is kept refrigerated) where as nothing in my research shows any shelf life limits on the GREEMU oil.  Since neither oil requires using more product than the other, GREEMU is the clear winner when comparing these points.

Overall, we really like the GREEMU and plan on keeping it in our household.

Devonain was generous and gave 85 members of the Schoolhouse Review Crew bottles of GREEMU to try and review.  Be sure to click the banner below to read all the other reviews.

Posted by Brenda Prince at 6:02 PM