Rescue Me! (A Homeschool Crew Review) 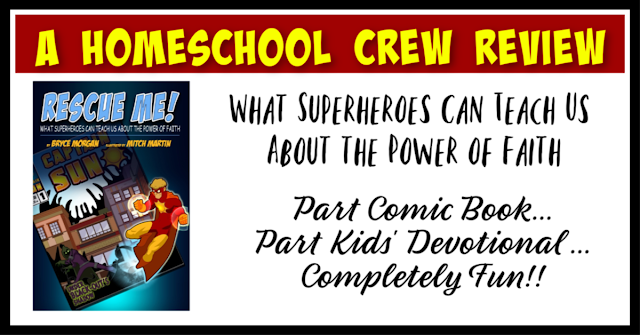 Superheroes seem to have a special appeal to everyone.  Who hasn't dreamed about having a superpower at one point of time or another.  There are days I wish I had the power to snap my fingers and have everything in my house spotless or to instantly teleport to somewhere quiet like the pink sands and blue waters of Bermuda. 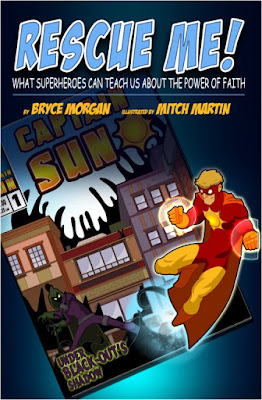 Or maybe, we like superheros not because we want to be one but because when our lives are falling apart, we need to be rescued.  While there isn't a Clark Kent/Superman or Peter Parker/Spiderman in the wings,  there is an even greater hero who really does exist who can rescue us from our sins and protect us from evil.  This is the theme behind Rescue Me! What Superheroes Can Teach Us About the Power of Faith, Book 1 of the The Captain Sun Adventures series written by Bryce Morgan and illustrated by Mitch Martin..

This is the first comic book in a series about the adventures of Captain Sun, the alter ego of Derek Duke and a superhero from another world who has come to Earth to defend the weak, help the oppressed, and uphold justise while fighting against evil in Capitol City, a sprawing metropolitis with a large population.

The story followings the standard format of a comic book with colorful, eye popping graphics using speech bubbles and narration text.  At 38 pages in lenght, the book consists of 8 very short chapters of three pages each. Each chapter is followed by a 1 page devotional that reads like a newspaper article from the Captial City Chronicle.  This devotional focuses on various aspects of being a superhero and then shows the parallel between Superheroes and our Savior.

At the end of the book is a list of "Questions To Think About!".  This includes 16 questions, 2 for each chapter, that include one question about what was going on in the comic book as well as a 2nd question that helps to draw a parallel between the story and the Bible.

Finally, an interactive website is available to go along with the book series.  Readers who want to share their own personal fan art or download coloring pages as well as Church Leaders looking for Vacation Bible Study materials can visit the Captain Sun website at www.itscaptainsun.com.

It's not very often that Garrett will actually pick up reading material on his own, especially outside of school time.  However, Captain Sun Adventures, with it's bright pictures and comic book format really seemed to catch his attention. 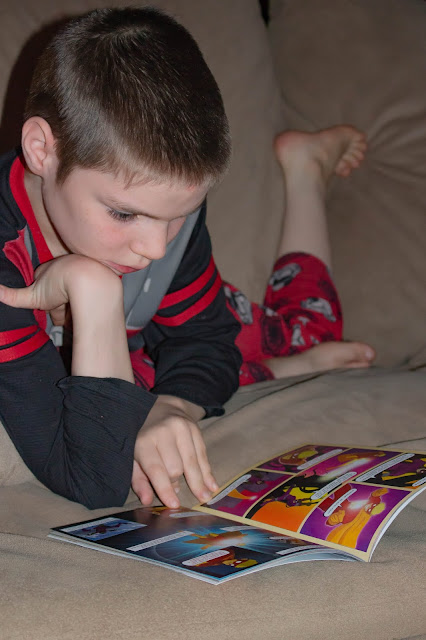 The text of the book is perfect for his reading level, although I did have to read the devotional part for him, as it was a large amount of reading.  The comic material is not necessarily Christian based. There's no reference to any religion of to God or Jesus in the comic itself.  The storyline is your typical superhero fighting against evil - in this case a villian who goes by the name Black Out to protect the citizens of Capitol City. 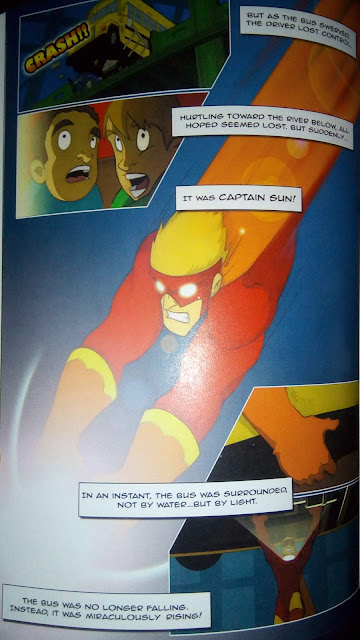 However, the devotional aspect of the book focuses on a particular aspect of the story, such as the villian or the superhero using their superpowers for good and protecting others, and then shows how that can be shown in Jesus and in our Lord.  Each devotional offers a question for the reader in regards to superheros as well as a Bible verse to tie everything together. 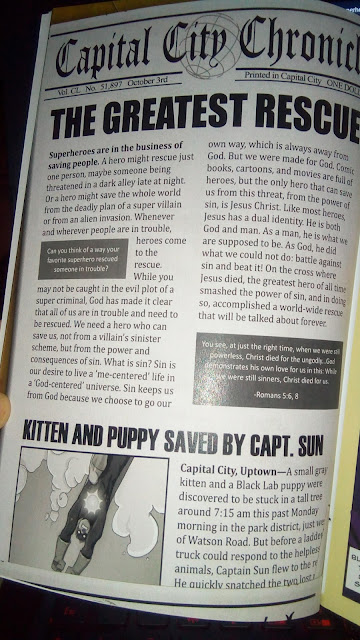 Those who enjoy superheros will recognize some nods to the classics, especially the Christopher Reeves Superman movies.  In one chapter, Captain Sun rescues a school bus full of children falling off a bridge - a scene remeniscient of both Superman and Spiderman.  In one of the Capitol City Chronicles, a story at the bottom mentions Captain Sun rescuing a kitten from a tree while another mentioned Captain Sun stopping a meteor and sending it back to space. Again, a nod to Superman who saved a cat in a tree and stopping a missile and sending it back to space.  Being a huge Superman Geek, I got a kick out of these when I was reading the Chronicles to Garrett.  Also, when Captain Sun realizes that he cannot defeat Black Out on his own, he calls upon the help of four other superheros who make up the Hero Defense League which instantely made me think of the Justice League. 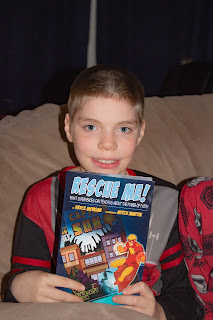 Overall, Garrett really enjoyed this book and with the cliff hanger at the end, it looks as if we will have to get the next book in the series so he can find out what happens with Captain Sun, the Hero Defense League, Black Out and Capitol City. 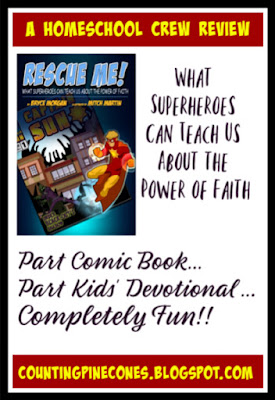 For more information about Captain Sun Adventures  and Rescue Me! What Superheroes Can Teach Us About The Power of Faith, be sure to visit their website. You can also find more information on the following social media platforms: