For many homeschooling moms, Math is the bane of our existence.   Some people like math and some people hate it. For those of us who hate it, teaching it can be very challenging since many times our feelings on something can transfer over and rub off on our kids. This causes a prejudice in our kids that typically wouldn’t be there without our influence. Or maybe we instead put off math as long as possible, which puts our kids behind. Thankfully, GPA LEARN understands this and have created stand alone, self contained math curriculum that really require no input from us as parents while our children learn.  I was given the opportunity to use and review GPALOVEMATH by GPA LEARN  and I found that it is well on the way for becoming  a dream come true for a parent like me who absolutely loathes math. 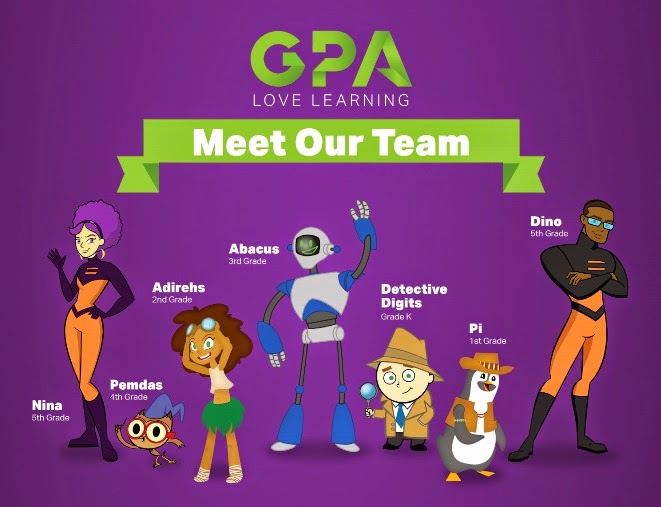 GPALOVEMATH is a online math program for Kindergarten through 5th grade that is completely stand alone and streams from the internet. There are no programs to download, you just log into the website and pick up where you last left off. . Each grade is “coached” by an animated character who teaches the lesson and then guides your child through practice drills and a post lesson quiz on what they have learned. Each grade meets and exceeds the Common Core State Standards in Mathematics (CCSSM)  -a  full listing of each Grade’s curriculum as well as the CCSS codes met can be reviewed prior to purchase.  By using a formula of Instruction, Practice and Quiz, children are guided through 150+  lessons and 10,000+ practice problems per grade.  By completing 4-5 lessons per week, a child could complete one grade level in about 10 months.  Each lesson takes anywhere from 10-20 minutes (depending on your child’s pace) followed by a practice review and then a quiz. Quizzes are then grades based on how many questions the child got right and are awarded titles such as “Rock Star” for doing well.

Students are able to select lessons from learning paths that guide the student through necessary skills. As they learn each skill, lessons are unlocked allowing the student to continue.  A Map of the learning path shows which lessons students have finished and how they scored on previous lessons. It also shows upcoming locked lessons. By clicking on each lesson, a drop down box will

A motivation system is also used that allows the parent to arrange for  pre-set rewards ranging from staying up 15 minutes past bedtime to a trip to Chuck-E-Cheese (parents can also customize rewards with more personalized rewards). By completing lessons and scoring well on quizzes, students are awarded points which add up towards these rewards. Some rewards are automatic and are given to the student after approximately every  7 lessons. Other rewards require the student to cash in their points for rewards such as Toys R Us gift certificates and local attractions in the Atlanta area.

One additional feature provided (but we did not use) was a messaging system under the "Engage" tab.  This would be great for maybe a co-op or homeschooling group with multiple children using the program as it provides a secure environment for kids (and parents) to communicate with each other about assignments, ect. As my kids are too young for any social medias on the internet, we did not use this feature.

How we used it: 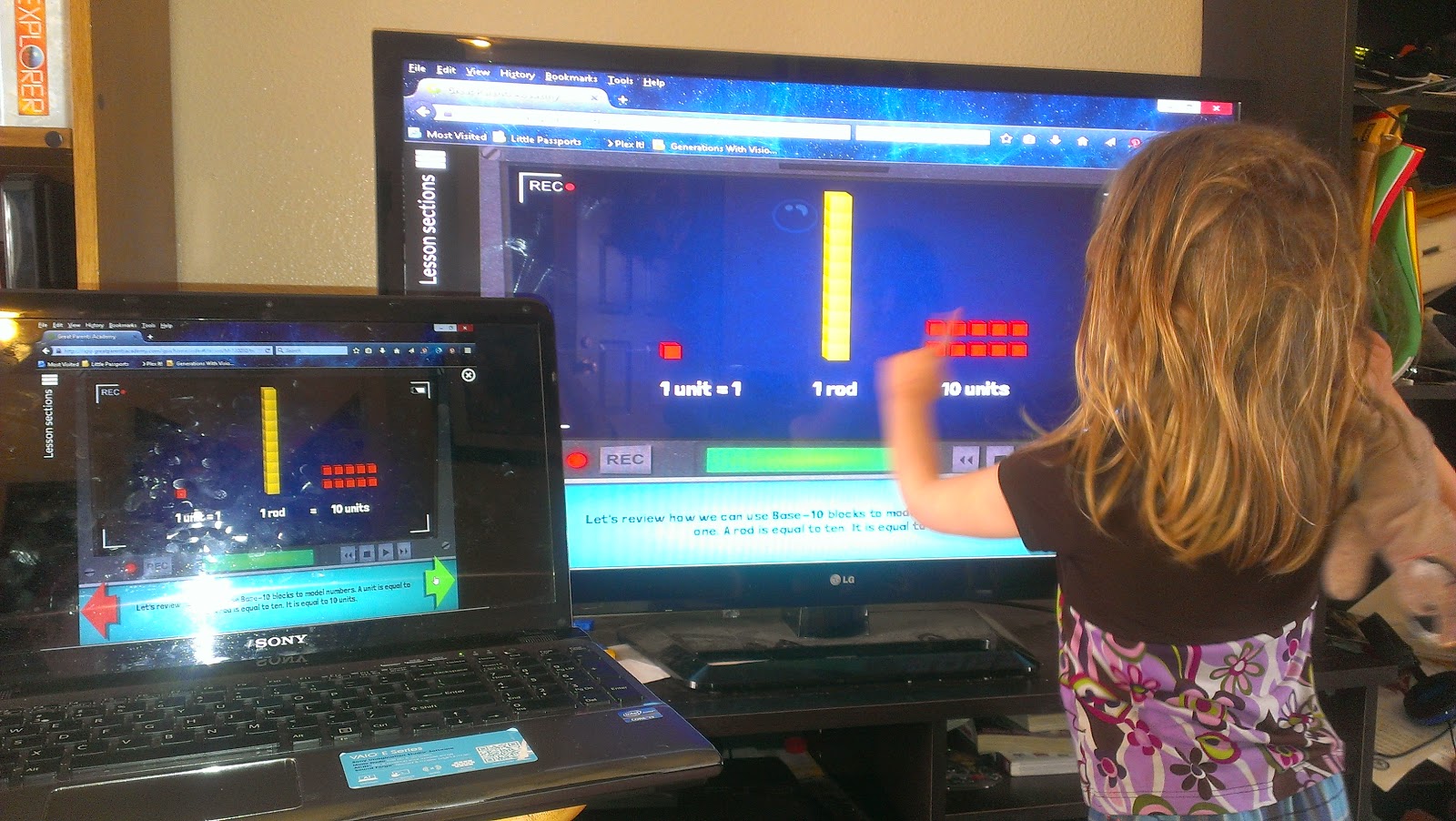 Since I was using this program for two students who are both first graders, I found the easiest way to use the program was to have the computer hooked up to the television via HDMI cord and let the kids watch the lesson together under one single account.  The kids were then able to split apart after the initial lesson to do the practice and quizzes independently from each other – although I admit on lessons that the kids already had complete understanding with, we just did the quizzes together as a refresher.  We tried to use the program on Monday, Wednesday and Fridays although some weeks we did more lessons per day and let them have Friday off.  Since the program is completely self contained, there were nothing to print out.  I was able to set up the rewards for the kids and they quickly were earning things such as staying up late, cuddle time with mommy, and extra story time as well as getting to pick out what I was cooking for dinner and getting to eat at a restaurant of their choosing.  They also accumulated enough points that they could both get a Toys R Us gift certificates.

This is a program that I really wanted to like and I think with some modifications, it can absolutely become something that I would find completely invaluable to my homeschooling. However, as the program currently stands, I found it to be a bit too glitchy to enjoy. However, much of what I found myself disliking can easily be fixed to make this program awesome.

Since we were using the first grade curriculum, our guide was Pi, a cute penguin from Australia . Pi wears an Akubra hat and leather vest and is hosting a TV show called “The Ice Factor”. Each lesson is a “clip” of the tv show and as the kids learned about Math, they also had to solve riddles to find out what type of animal the Special Guest was or what type of Habitat they were going to visit by the end of the lesson.  The lessons are very well done and explain the math concepts in depth. The repetition of the S.T.A.R. strategy of solving problems (Study the problem, Think about how to solve the problem, Apply your knowledge to solve the problem, Review your answer and double check your answer) in each lesson really helped the kids to think about what they were learning and apply not only the current lesson but past lessons.

However, as cute as Pi is, his voice is very robotic. This wouldn’t be too much of an issue, except his voice is very robotic with a stereotypical Australian accent.  He is very hard to understand and I was very glad there was closed captioning with the lesson. However, many times the lesson would glitch out and we would lose the text bar with the closed captioning as well as the forward/back arrows. When this happened, we often had no clue what Pi was talking about and would have to restart the lesson altogether.  This would cause us to have multiple attempts at the same lesson.   These types of problems were often encountered using the Firefox browser but I had similar issues using Chrome.

There were also times when the problems or answers had a mistake or were just wrong. An example of this was when in a counting exercise (I believe it was a Skip counting 10 lesson), the answer was 81 but the picture showed 71 items.. Another problem asked for the kids to drag and drop the correct number words that matched the number, but there was no number . We had to guess what number they were wanting us to pick.


As for the voice itself, while the robotic accent is a bit irritating, I did go into the 2nd and 3rd grade lessons and found that while the voice was still robotic, they were much easier to understand.  I think its just the Australian accent. It was very distracting for my kids (especially Garrett) as when Pi would put emphasis on a word that had a heavy R sound, it sounded as if Pi was passing gas. NOT a good thing to sound like when you have an 8 year old boy who is obsessed with body sounds. LOL   So when this happened, my kids both would crack up laughing and getting them back on track proved to be hard to do.


Ashleigh REALLY enjoyed the puzzles of having to guess the habitat or figure out the special guest. I think that was her favorite part of doing the math program
.
Both kids enjoyed the reward system, especially when they got to pick out what restaurant we would be eating at that weekend.  (They both decided on a local salad bar restaurant and discovered that they both like beets, so it was a win all around.. haha).  At this point, they do not know there are also some rewards Mom added such as a trip to Six Flags Magic Mountain, Chuck E Cheese and the San Diego Zoo.. I do wish that the gift certificate and attraction tickets available through the program would extend beyond the Atlanta area and maybe as the program grows this will be possible.

One thing I found to be very nice is that after the kids completed a lesson, I would receive an email stating what the lesson was over, how long it took them to complete it, how they did on the practice and how well they did on the quiz. It also told me if we skipped over the lesson (which we did a few times after losing our navigation arrows). While it didn’t provide any information I didn’t already know, since we were doing the lessons together, if I were allowing the kids to do lessons independently, it would be very valuable as far as student accountability.

Overall, this is a good program but it needs some fine tuning to make it a GREAT program. By fixing the glitches to make it a bit more stable running, maybe improve the robotic voices (or in the very least don’t let Pi sound like he ate a bad burrito), and a bit of double checking on the graphics to make sure they are correct and this could definitely be a program that would be great for plopping your kids in front of, allowing you to do something else (dishes anyone?) while they are actually learning math.

Subscriptions for GPALOVEMATH costs $149 per child with access to all six grades at that price. By using the promo code GPAINTRO15 you will save 15% making the cost $129 per child. A monthly subscription plan is available for $12.99 per month.

Posted by Brenda Prince at 8:14 PM