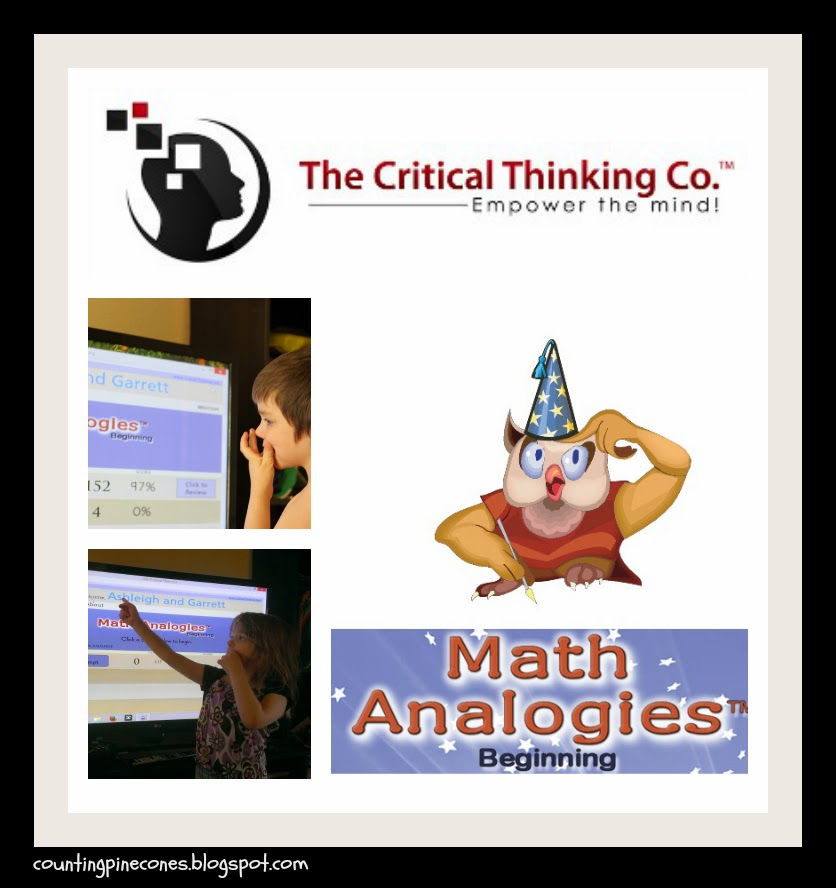 Many homeschool families might be familiar with the Math Analogies Beginning book: a reproducible workbook for grades K-1 where the student is presented with a series of pictures and has to pick a fourth picture that falls into a specific thought presented by the first two pictures. (If A=B then C=D.)   The Critical Thinking Co.has taken this series to a new platform by introducing a software version of their popular workbook. The kids and I had the opportunity to use and review Math Analogies Beginning software available for the Windows platform over the last few weeks and were really impressed with it.

When it comes to teaching our kids mathematics, we tend to see only addition, subtraction, multiplication and division problems but fail to think about critical thinking skills. Having children solve analogies helps to make new and unfamiliar concepts more meaningful to students by connecting what they already know to what they are learning.  Teaching these skills at an early level will carry though with them through higher levels of not only mathematics but all subjects of study.  The Critical Thinking Co. understands the importance of these skills and have developed the series of both the workbooks and the software for grades K-7th (The software currently follows to grade 5 with a workbook covering grades 6-7).

Math Analogies – Beginning Software for Windows Download
Purchase of this award winning software allows for downloading and registering it to two computers (an option for 6 computers is also available on their website) using the serial number sent by The Critical Thinking Co. The download is currently only for the Windows PC platform, however there is also a version available for both Ipad and Android tablets. An fully functional online browser based demo is available on their website.

The software consists of 152 analogy styled problems that fit the grade-appropriate standards identified by the National Council of Teaching Mathematics. The question is presented and beneath  is four possible answer choices. Students must click and drag their selected answer up to complete the analogy.  The questions can be answered at a pace comfortable to the student and will autosave and allow to resume where they last left off.  After the student finishes the first attempt at the 152 problems, the program will tell the student how many questions they completed on that attempt as well as show a percentage as to how many they got correct. It will then allow the student to answer the questions they got incorrect on the next attempt. The student is given a total of 4 attempts to answer all the questions correctly. However, if after 4 attempts all the questions have not been answered correctly, the program can be reset and a new attempt from the beginning can be made.   Questions can be reviewed to see which ones were correct and which ones were incorrect.

I found that the program did not use much resources on my computer and ran extremely smooth. Installation was easy and quick. In the weeks that we used the program we did not experience any unstableness or crashing. It ran as it was meant to run and had no issues whatsoever.
Since I have two kids that are both 1st graders, it works really well for us to hook my laptop up to my television so that both kids can see the screen well.  Three times a week, we would work on a set of 20 problems – 10 for each child.  The kids enjoyed working on the analogies and many times my youngest would get upset that she couldn’t answer more than her 10 questions for the day.   Each session of 20 questions took us only about 10 minutes total and much of that was spent sounding out words that they did not know. 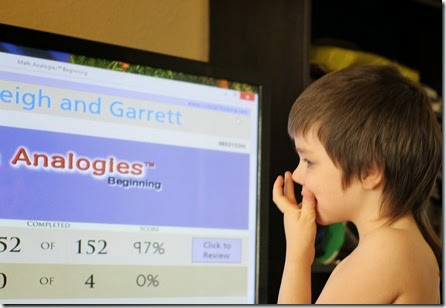 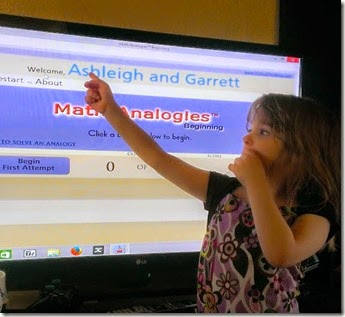 The first thing I should point out is that this software is a digital copy of the workbook with the same 152 problems. However, if your child is a more visual learner, like my son, who dislikes anything printed in a book, this is a great alternative for introducing critical thinking skills.  My kids really enjoyed the problems but I did feel that they were too easy for my kids and I would have been better off selecting a higher level for them.  Together they only missed a combined total of 4 on their first attempt and none on other attempts and  the four they originally missed  were because they selected a random answer so that they didn't have to read certain words. The Beginnings level would probably be great for a Gifted Pre-K and an Average Kindergartner but unless your first grader is lagging behind,  I would suggest the Math Analogies Level 1 for grades 2-3 (also available on the same platforms) to make your student work a bit harder.  (Or maybe, just maybe, my kids are further along then I give them credit for lol)

Overall, my kids really liked what they dubbed “Owl Math” (the mascot of this series being a wise looking owl in a wizards hat) and I believe this makes for a really great distraction when kids are frustrated with their other lessons. My kids viewed this more as a game rather than actual schoolwork and play it even though they have completed it a few times now using the reset option.  The program does not take up much space on the hard drive, does not require much RAM to run, runs smoothly and does not crash, all important factors when considering software. It’s also a very easy program for younger children to manipulate once they understand the mechanics and would be a great exercise for learning to use a mouse as well.  It is also a very quiet program, no music or sound effects to distract your child from what they should be doing.  Overall, I can found it a very useful tool in my homeschooling repertoire and considering how much my children enjoyed it, I will definitely continue with this series.
Both the workbook and software versions of all the Math Analogies series can be purchased at The Critical Thinking Co. website. In addition to their website, The Critical Thinking Co can also be found on the following social media site: Facebook, Google +, Twitter, and Pinterest.

Posted by Brenda Prince at 9:00 AM