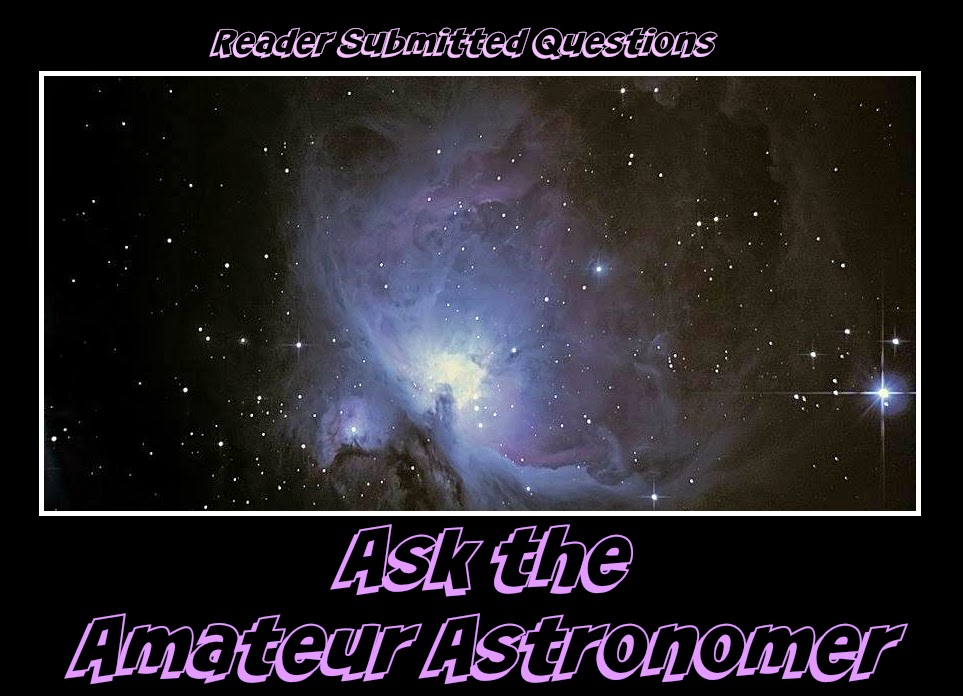 I’d like to welcome everyone to a new series that we’re going to be bringing you here at Counting Pinecones in collaboration with Charles over at Chuckwalla Observatory. A couple of months ago, Charles agreed to help me out by writing a once a month summary of upcoming celestial events for each month. While we were discussing this, we came up with an idea to allow readers of this blog to submit their Astronomy related questions to Chuckwalla Observatory’s Email and then Charles along with a few other amateur astronomers that he knows will answer those questions each month.

This month, we received a few questions from readers ranging from the age of 8 all the way to 63 years of age and from all over the country.  A huge thank you to Charles from Chuckwalla Observatory for agreeing to participating in this series and a thank you to my readers who each submitted questions.

If you have an astronomy related question that you would like to have answered, please submit your questions to chuckwallaobservatory@gmail.com before the 13th of the following month :)

Hunter (8 ) from New Jersey-  Why does the moon shine?


The moon shines because light from the Sun is reflected off the surface of the moon. The amount of the illuminated moon we see depends on where it is in it's orbit around Earth. That's why we have moon phases. Even though the moon appears bright in the sky, it is actually a dark colored celestial body. The moon's illumination makes it look white, when in reality it is a shade of grey.

Jackson (12) from Colorado -   Why was Pluto downgraded from planet to dwarf planet?

Pluto was discovered by Clyde Tombaugh in 1930, and was the 9th planetary member of our solar system until it's reclassification by the International Astronomical Union in 2006. Because scientists were finding more and more small Pluto-like planets all the time, the IAU created a resolution that exactly defined what a planet is. To be a planet, an object must:

1. Orbit the Sun,
2. Have enough mass so that it is pulled into a round shape by it's own gravity,
3. Must clear it's orbital zone of other objects.
Pluto meets only two of the three rules. It does orbit the Sun, and it is also has enough mass and gravity to pull it into a round shape. However, Pluto just isn't massive enough to have complete dominance of it's orbital neighborhood. There are other objects near Pluto's orbit called Plutinos. Because Pluto meets only two of the rules, it was reclassified as a dwarf planet. There are five know dwarf planets to date, but there could be hundreds more beyond Pluto.

Bryan (63) from Texas -  How long does it take the Great Red Spot on Jupiter to rotate out of view? How do you take a clear photo of Jupiter and it's Great Red Spot? 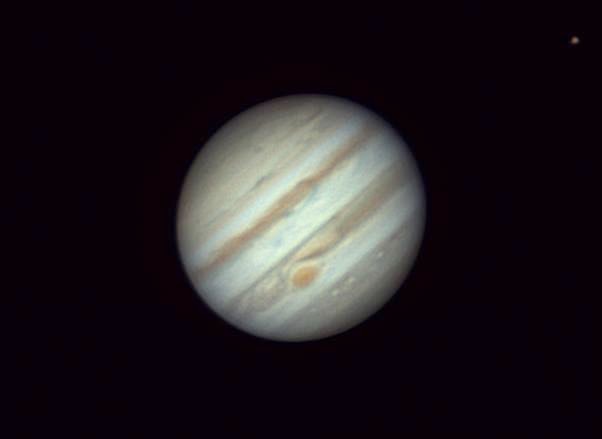 When observed from Earth, the GRS is visible on Jupiter's daytime side for approximately 5 hours. Although it does not move very much to the north or south, it does drift east and west regularly. To take a clear image of Jupiter, you will certainly need to attach a camera to at least a small telescope. Although it is the largest planet in the solar system, it still appears quite small in our skies. However, it's large size means it reflects lots of sunlight, making it one of the brightest objects visible at night. Because of that brightness, you need a fast shutter speed to prevent blowing out the image from over-saturation. Seeing conditions and air transparency will affect the quality of your pictures. A better way to image Jupiter and other planets is to use a video camera designed for planetary imaging. These cameras take video at many frames per second. Later, these frames are sorted and the best quality frames are combined to form one image.

Alyssa (15) from California -  Why can we only see one side of the Moon? Why are there craters on the side we can see? Wouldn't the backside block the meteors? Earth. The Moon rotates on it's axis just like the Earth rotates. That's why we have day and night. But the moon also revolves around the Earth at the same time, just like how Earth revolves around the Sun. The time it takes for the moon to rotates on it's axis and revolve around the Earth is exactly the same. This is also called synchronous rotation. That's why we can only see the same side of the moon from Earth. The moon is cratered on all sides because meteors/asteroids can approach from any angle, not just from the backside of the moon. Also, the moon was not always tidally locked to Earth. Many millions of years ago, the moon was much closer to the Earth and was not in synchronous rotation.

Tristan (15) from California -  Can you walk on an asteroid like the astronauts do in the movie Armageddon? 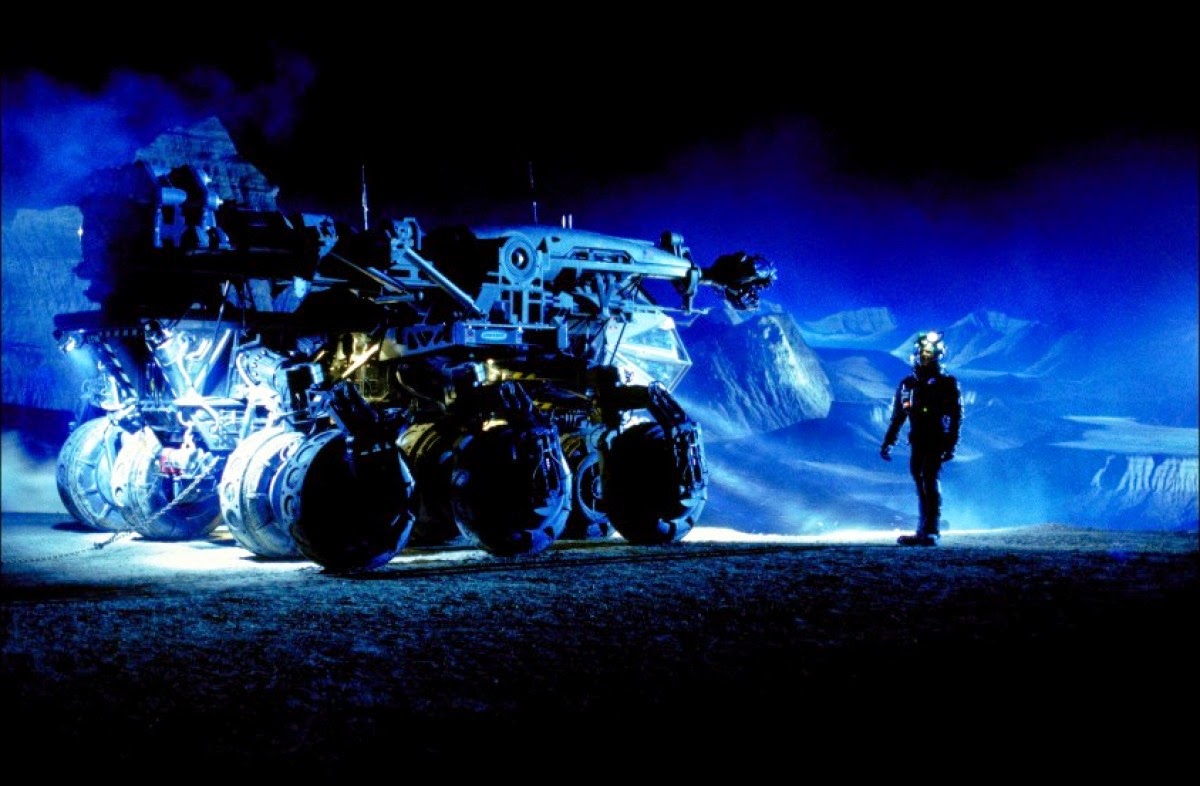 This depends on the size of the asteroid and it's composition, density...which is directly related to it's surface gravity. You need gravity to be able to stand on an object, an asteroid is no different. On a smaller/lighter asteroid with little gravity, you'd have to tie yourself to it. On larger, more dense asteroids with higher gravity, it might be possible to stand on the surface. You would probably still need some help though, such as a jet pack that would help keep you firmly planted on the surface. In any case, it would be very difficult to move around and get things done.

Posted by Brenda Prince at 2:27 PM