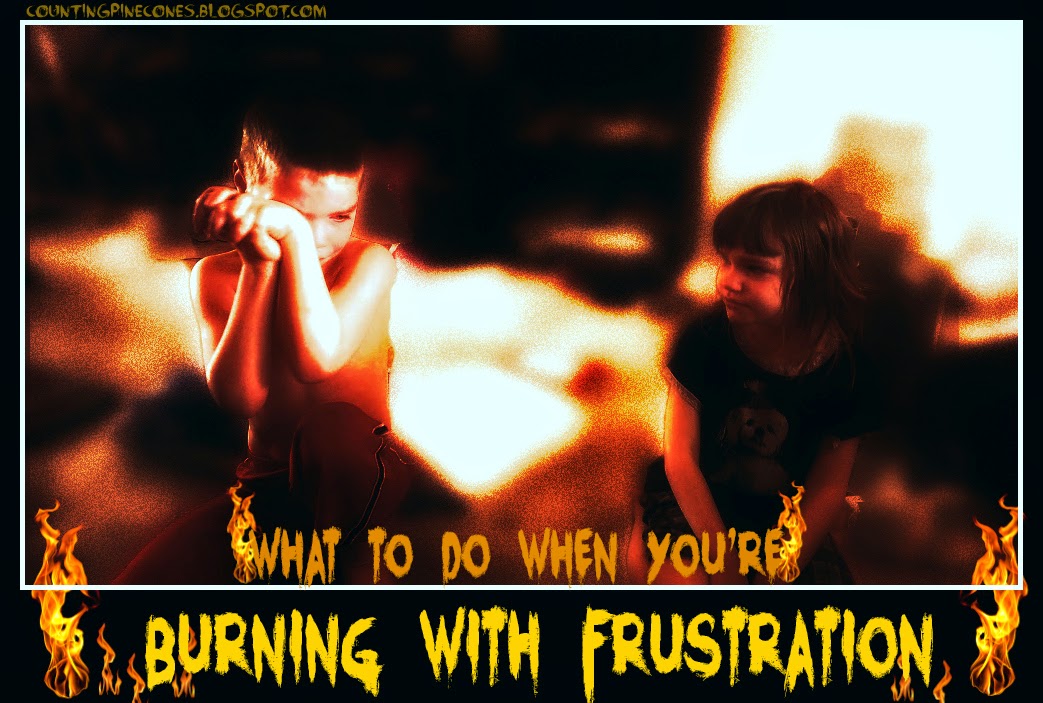 This is something I really need to work on. I get upset with myself a lot because I find as I have gotten older, my temperament fuse has gotten much shorter. A short fuse is not a good thing when you are homeschooling.

I hate being this way.. I hate when I raise my voice at my kids when the day isn't going well. I know my kids do not like it either.

Today I had one of those moments. We were sitting together working on our school work, which already
wasn't going the way I would have liked. It took almost an hour just to get though a reading of “Oh, The Places You'll Go” by Dr Seuss, a book that should have taken about 5 minutes. My daughter's cat was being annoying, climbing over everything and wanting attention – my youngest daughter hates the cat and is scared of it so as soon as the cat came into proximity, Ash was freaking out. I finally ended up having to lock the cat in my bedroom just to get through the book but the tone had already been set.

I gave the kids a handout with a word find to go along with the book.. The kids normally enjoy word finds but not today. Garrett wouldn't even look at it and even cried when he was told he needed to write his name and Ash threw her pencil at me and declared she didn't know what the letter B was, much less the word Balloons (a word she knows and had read only a few minutes before).

Somehow we managed to get through our reading and moved on to Botany. I only got two pages into the reading and even that took close to an hour.. I'm not sure what happened that actually caused me to snap, that's how insignificant it was, but snap I did. I am ashamed to say, I yelled at my kids and I am sure it was something along the lines of “Sit your butts down, turn around and pay attention or you'll go to your room and there will be no games and no kindle today”..

That's when my son looked at me and he said “Mom, are you frustrated?”

“Yes, Garrett, I am frustrated and I am sorry I yelled at you because of it.”

I then realized that none of us were going to get much accomplished for the day so we decided instead to have lunch early. Along with their grilled chicken, the kids also had smoked peanuts in their shells as a snack.

Guess what? We ended up having a very nice discussion about peanuts came from plants, what day did God create plants, why we use latin in science and why it's considered a dead language. Basically, we ended up having our lesson without the kids even realizing we were having a lesson, we accomplished most of what we were suppose to do today (I'm letting them slide today on our math program) and we both got to calm down. That's a win in my book.

Frustration Happens to the Best of Us

There's not a parent in this world who hasn't lost their cool at some point or another and if anyone tells you differently, they are a liar. We've all been to that point where something very minor results in a major blowout. It might not be at your kids – maybe you hold it in til your spouse gets home and you blow up at them instead. Maybe you take it out on another parent at your kid's sports practice or dance lesson. Maybe it was yelling at someone you don't know in another car. No matter who or what caused it, we have all had one of those moments and we almost always immediately feel ashamed of it.

One of the things I've been asking myself a lot lately is if my kids were in public schools and they came home one day and told me that their teacher had yelled at them and said some of the things I have said in my own frustration, how would I react. Would I be okay with someone else talking to or treating my kids that way? If not, then I should not be doing it either.

In the past few weeks, I have found myself praying a lot for patience. I even told my husband I had been asking God to help me with finding patience. In this search for patience, I'm finding insight not only with my own temper but also with the kids as well, things I don't necessarily like. I'm learning that my kids have basically gotten use to mom raising her voice and don't pay much mind to it. Some parents would justify their behavior by saying “It's better to yell at them then to physically discipline them”.. Luckily, I have never been on to spank my kids but I feel terrible for kids who do get spanked because they don't perform the way a parent thinks they should in homeschooling.

In my asking for patience, God pressed upon my heart the true meaning of “Discipline”.. When we hear the word discipline, we often think of a punishment of some sort in response to a wrong doing. However, that is not what the word actually means. Discipline is a Biblical concept that simply meaning to train, teach, and to instruct. The 12 Disciples were called disciples because they were learning from Jesus. Jesus did not instruct them by yelling at them, hitting them or by other forms of punishment. Instead, he instructed them with love and compassion and we as Christian parents should learn from him and instruct our children the same way.

What To Do When Frustration Gets to You

Next time you find yourself on the brink of losing it, try a few of these suggestions and see if it helps.

Posted by Brenda Prince at 5:12 PM