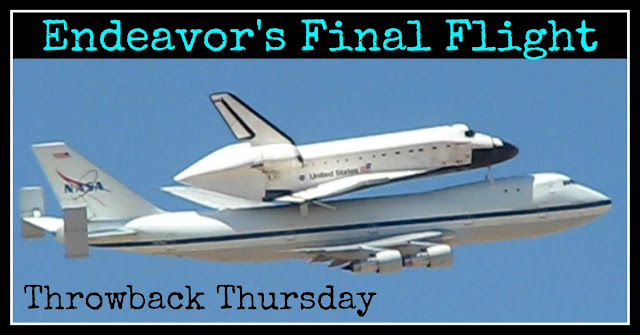 I've personally always held a personal attachment to the Space Shuttle and the Space program.

On January 28th, 1986  I sat in my bedroom praying for the lost who had died in the Challenger Tragedy. I remember asking the Lord to give me a sign that they did not suffer, that they were with him in heaven.  No sooner had I asked that, my prayer was answered when the phone rang and my father called me down to tell me my Uncle was on the phone, calling from New York, to wish me a Happy Birthday. It was my tenth and needless to say, I never viewed my birthday the same.

I also saw the fiery debris as it streaked across the Texas sky as the Space Shuttle Columbia broke apart and took another 7 lives with it.  It was early in the morning and I was taking my oldest daughter, who was only one at the time,

So for whatever morbid reasons, I have always felt drawn to the shuttle.  I always hoped to take the kids to a lift off at Cape Canaveral but unfortunately, the Space Shuttle program came to an end and the remaining shuttles were shipped off to various locations throughout the country.

As it so happened, the Space Shuttle Endeavor was being relocated to Los Angeles where it would be housed at the California Science Center.  So, as many people got to see, the shuttle was loaded piggy back on one of NASA's 747s and it took to the skies for its final flight.


I have the honor (okay, thats hard for me to say) of living at Edwards AFB.. When it comes to the space program, this place is the hotspot for history. If you've ever seen the movie "The Right Stuff" then you've seen Edwards - this is where it started. This is where test pilots from the Air Force were recruited to be the first Astronauts. It is also where the first space shuttles were tested after being built right up the road.  It's also the site of Columbia's emergency landing on April 14th, 1981 on Roger's Lake bed.  So it was only fitting that on the last flight the shuttle would make, she would make a fly over the base as well as touch down and rest over night before making her way to L.A.

On September 20th, 2012 my husband and I loaded up the kids and headed to the park across the street from the school and we waited. Eventually, in the far off distance, we could see a dark spec in the sky. It grew larger and larger until eventually, there was no mistaking it. Accompanied by two fighter jets, the 747 made a low altitude pass over where we were, as well as the school and the housing area and then it made its way to the flight line for its landing.  The kids watched in awe as we got a very special viewing as it flew over - nobody else in the country got to see it at such a low altitude as it made its cross country trek.


The next morning, the shuttle took off for its last time and landed at LAX.. There it was loaded on a flatbed and made a treacherous journey through the streets of Los Angeles where eventually it came to its final home at the museum.

On August 17th, 2013  we made the trip down to Los Angeles where we once again got to get up close and personal with Endeavor. This time, she was in a hanger and no longer piggy backed but still, it was liking seeing an old friend.. 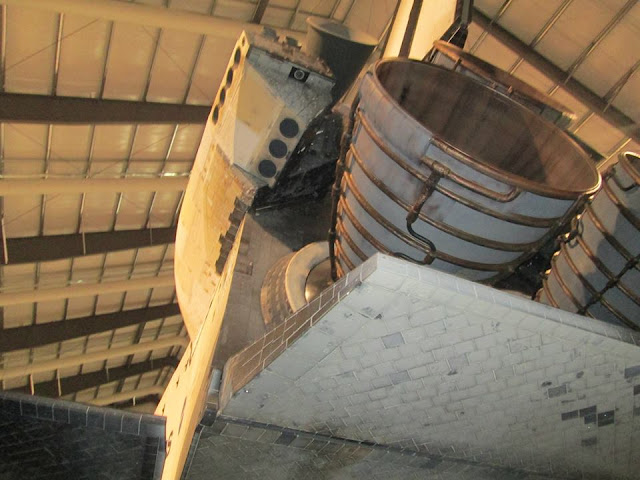 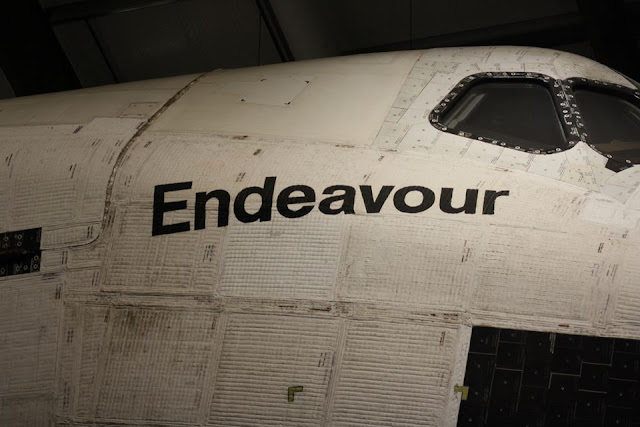 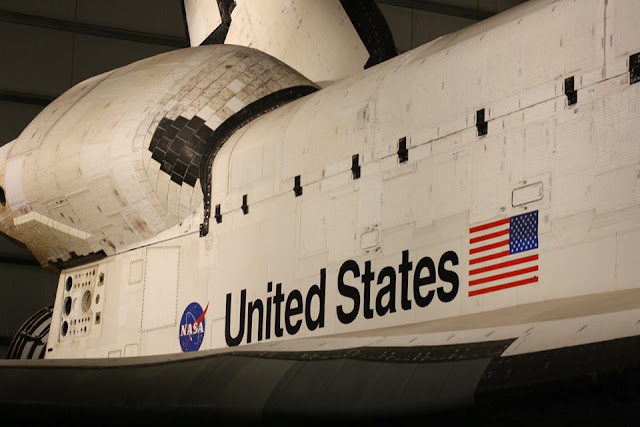 If you ever have the opportunity to visit Endeavor at the Science Center in Los Angeles, I highly recommend it.. It really is amazing to get up close to a piece of history like this and you have to see it to really appreciate the sheer size of this thing :)
Posted by Brenda Prince at 6:19 PM