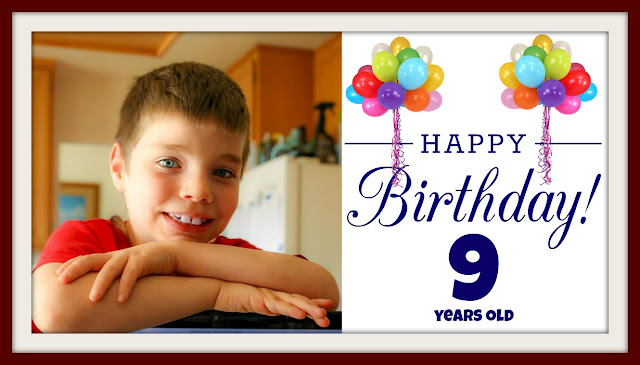 As a mom, birthdays are always bittersweet.  With each exchange of the previous year calendar for the new one, it means the kids are one step closer to that day when they take turns flying the coop and trying out their wings in the world outside on their own. It wasn't so bad when my oldest daughter hit each birthday, until she got around the age 12 and then I realized that my time of her being a child was limited. Now that she's 16 and a Junior in high school and we're starting to look at colleges, it really hit me that in less than 2 years, she will be out of the house and an adult woman of her own. 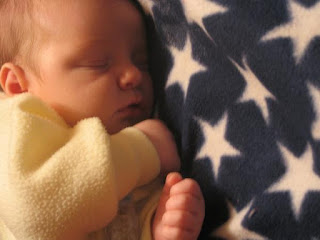 Today my middle child turns 9.  To me, that means half the time between his being born and his becoming an adult has passed.  In nine more years he will be 18 and a man, no longer my lil buddy who comes crying for momma to kiss his boo-boos when he gets a cut or scrape (which, with a rambunctious boy, is quite often).  Only three years before he hits the teenage years - a mear blink of an eye.

This little man has brought so much joy to my life. He is, in all sense of the word, my little buddy. There was a time when he was about 6 that he was still completely non verbal and I cried myself to sleep many times thinking I would never hear him say "I love you Mom" - now he says it to me almost daily just because he wants to.  He's the one who likes to help mom cook in the kitchen, who helps me make the morning coffee and who helps me fold the laundry.

He is, in all sense of the word, a momma's boy.  Now, don't get me wrong, I love all three of my kids 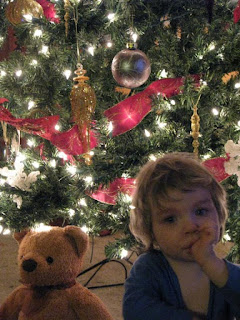 equally and show no partiality. However, I now understand what other mothers have talked about in regards to a special bond between a mom and her son.  It doesn't mean I love him more than the girls but there is indeed a difference between those bonds, both in a very unique way.

Raising Garrett can be frustrating, especially when his inquisitiveness results in the destruction of electronics, clocks, watches and anything else that has gears. (Which reminds me, I need to go pick up some old electronics today for him to tear up so he will leave mine alone.. lol).  But there's also something magic in watching his concentration as he's figuring out how something works or why things are the way they are.  There's a big difference in how Garrett approaches the world compared to his sisters.

Garrett was different from the start.

He was the pregnancy that gave me the most trouble, causing me to puke my guts out from eating anything and everything.

He was the longest labor (19 hours compared to less than 5 with the girls), the most painful - even then he did things his own way and decided to come out sunny side up.

He's the one who came home from the hospital in a pink carseat and pink clothes and blankets because he fooled the sonogram tech and doctor and had them believe he was a girl until he was born.

He's the one who had the broken clavicle at birth and then a broken humerus at 2 months, causing a scary CPS investigation and ultimately leading to his Osteogenisis Imperfecta diagnosis (something I 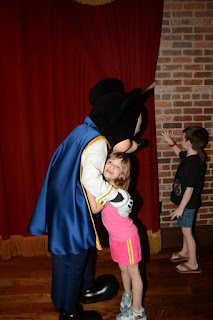 passed on to him unknowingly as I never gave any thought all my own multiple breaks).

And of course, there's his autism that makes him special as well. He's the kid who talks to Cinderella about spider webs or has to feel the texture of the brick wall when Mickey Mouse is right in front of him...


But it's all these wonderful quirks that make him so absolutely lovable.  And it's these quirks that I'm sad to think are halfway over.

What will Garrett be like as a young man?  This I do not know.  While he's a high functioning autistic child, he is still autistic and that will always be part of who he is. His brain will not re-wire itself normal just because he turns 18.


But for now, I am enjoying him, quirks and all, even when I find him hiding in his closet with a screwdriver and the 30 dollar clock I JUST brought and hid in my own closet until I could get my husband to hang it out of reach (yes, that happened lol).

Happy 9th Birthday little buddy.. Thank you for coming into my life and bringing me another ray of sunshine to celebrate - Momma loves you - just please, stay away from my clocks ;) 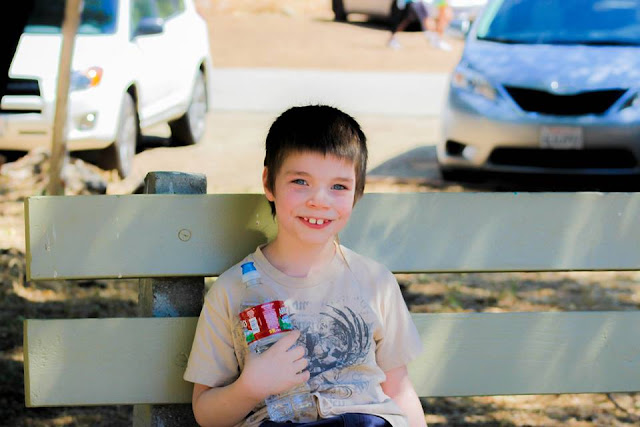