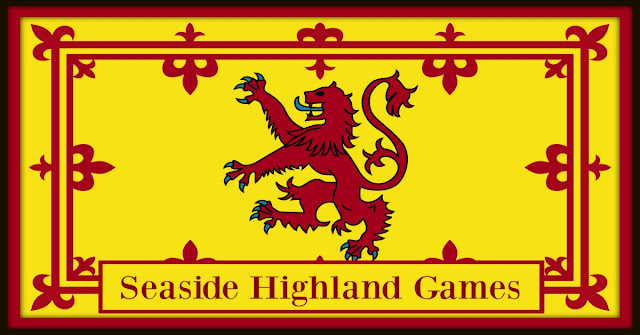 My husband has a huge Scottish presence in his bloodlines.  Prior to my starting to do our geneology, he had no clue that there was such a predominant Scottish ancestry.  We found ties to four predominate clans; Clan Campbell, Clan Sutherland, Clan Stewart and Clan Bruce. However, of those 4 clans, the most predominant tie was to Clan Campbell - his grandmother was a Campbell and all immediate ancestors were Campbell.  Because of this, my husband decided to begin learning about his Scottish ancestors as well as about Clan Campbell.   Now, our family is a proud member of the Clan Campbell society and my husband proudly wears his Campbell ancient kilt whenever a Scottish event is in the area.

So this weekend, we got out of the house and headed to Ventura, California for the Seaside Highland Games. We love going to Scottish Festivals and Highland games as it gives the kids to experience a bit of their Scottish heritage and for Charles to connect with other members of the Clan in the area.

Unfortunately, we got a much later start than we had wanted in
arriving at the games so we completely missed out on the actual games themselves :(   It's always fun to watch big men throwing heavy stuff around, especially the cabers.  This is usually a very foreign thing for people unfamiliar with it to see for the first time but basically, big guys (and sometimes big women) pick up cabers made from a solid piece of wood that is about 19 feet long and weigh about 175 lbs, hold them upright and then try to throw it as far as possible while making it flip end over end.  Basically, they are throwing a telephone pole.. LOL  OOOH and did I mention they are kilted while doing it??  The caber toss is always a huge draw for any Highland games.  In addition to the caber toss, there are other heavy things being thrown around such as the stone put which is similar to the shot put you see in the Olympics but instead of a steel ball, they usually throw a huge stone weighing around 20-26 lbs, the hammer throw.  There is also something called the "Weight over the bar" which is wear the competitor stands with his back to a horizontal bar approximately 10 foot off the ground and try to throw a 56 lb weight over it.  Needless to say, these events require a lot of strength and Charles has no plans to ever compete in any of these events but they are always fun to watch. We were really sad we missed them this year.

The other draw for any Highland games is the bagpipes. Garrett LOVES bagpipes so this is always the highlight for him.  Some say the pipes sound like a dying cat but we enjoy listening to them, especially when there's so many of them playing at the same time. As Garrett has learned, pipes are hard to play as he's been trying to learn on his chanter. 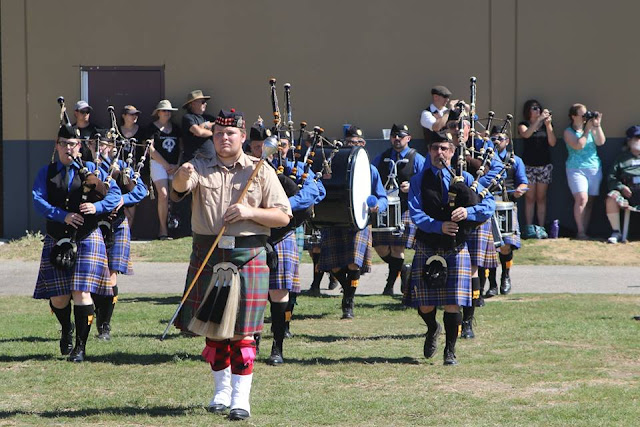 As for Ashleigh, she enjoys the animals. This years games had come goats and a few Highland Cows for kids to feed and touch. Ashleigh enjoyed getting to pet the cows although she was a bit intimidated by the huge horns. However, they were really gentle giants and wanted nothing more than to be pet and fed biscuits.  We did discover that they are really slobbery too as they drooled all over her while trying to feed them hay and biscuits.. LOL


Another big draw of the games is to visit the Clan Tents.. There was a good showing this year for the games and the clan tents took up the entire street.  It's much fun to look at all the various tartans and presentations each Clan puts on display.

Of course, for us, this meant a visit to the Clan Campbell tent where all the kids were given the opportunity to hold a Scottish Claymore sword, get a bottle of water and relax for a few minutes while Dad was given a dram of a nice 18 year old single malt Scotch.   As a member of Clan Campbell, this tent is used as a hospitality "suite" for members of the clan to come relax, visit with other members of the Clan and to find out what events are coming up that the Clan Society will be in

attendance at.  It also has lots of information about the Clan, the castles the Clan control, the reigning Clan Chief (which is the current Duke of Argyll) and educational opportunities offered by the Clan.  If you are of Scottish decent, I always recommend joining your Clan association. Charles ended up picking up a Clan challenge coin while at the tent; these are coins that typically military members carry on them at all times.  The rule is, if one is in a bar and someone pulls out their coin and puts it on the bar, all others in the party must present their coins or else they will be buying drinks for everyone.  (If everyone else has their coin, then the person who challenged buys).  Only 200 of these coins were produced for Clan Campbell and we were told that if/when we ever make our way to Inverary Castle, we are to challenge the Duke as he's also been given one of the coins.  We're hoping to make a trip to Scotland in the next 5 years so the coin will be with us when we do ;)


There is so much to see and do at the games beyond just the Clans and the throwing though. There's a bit of something for everyone. There are also live bands playing celtic music, harp playing competitions, Highland dancing competitions and of course, the bagpipe competitions. We also got to see some really nice British cars on display. 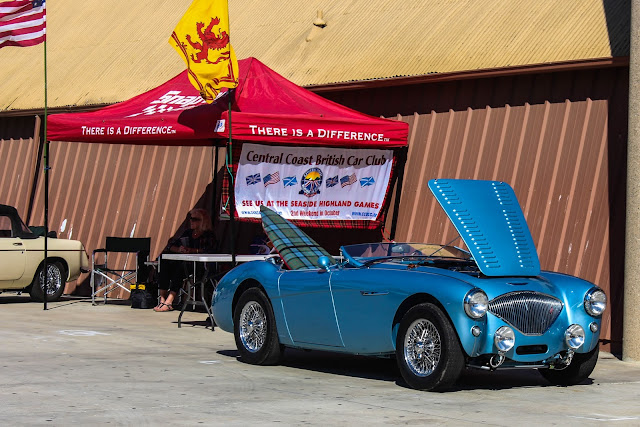 Finally, at any Scottish event, there are always tons of vendors.. They sell everything and anything Scottish (and some things that aren't.. lol)..  There are always plenty of kilts, kilt hose, items made with various tartans, jewelry, British foods, music, Tshirts, and various other accessories.  Charles ended up buying a new pair of kilt hose, some flashes (the lil "flags" that are hanging out of the sides of the hose), and a Sgian Dubh (pronounced Skeen- doo).  This is a small knife that is often found hanging out of the hose of someone wearing a kilt.

We had so much fun, although we were really sad we didn't get there as early as we had hoped. These particular event was really well put together and I think next year we will try to attend both days in order to see as much of the competitions as possible..  Maybe by then, Garrett will have his own kilt to wear ;)

Posted by Brenda Prince at 8:47 PM