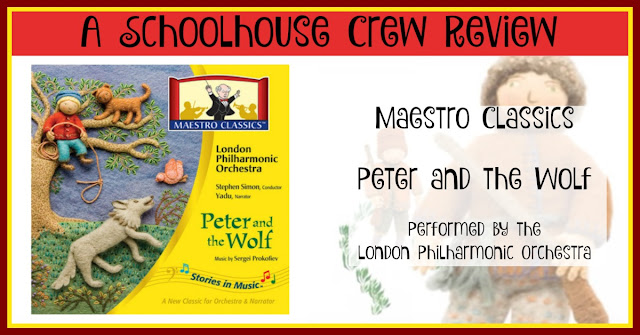 I don't remember a whole lot about my 2nd grade year. I remember my teacher, Mrs Wiltz, I remember where my classroom was, and I remember duck and cover drills - hey, it was the early 80's..  While I don't remember who my music teacher was, I do remember attending a separate music class each day during that year but not a whole lot more.  However, I remember to distinct things about that class - learning the various songs about Texas ("Texas, Our Texas", "The Eyes of Texas" and "The Yellow Rose of Texas") and I remember listening to Peter and the Wolf.  I loved Peter and the Wolf and it was probably my first introduction to Orchestral music and I always loved how, in my young mind, I could clearly picture each animal based on the instrument playing.

It was this early experience in music class that led me to want to be able to review Maestro Classics Peter and the Wolf as performed by the London Philharmonic Orchestra.  My children are the same age as when I was introduced to this piece and I hoped to instill the same love I have for it in them.

Maestro Classics mission is to cultivate a love of music through education and using fun, upbeat pieces that would be of interest to children. Offering a large variety of classical pieces such as Carnival of the Animals, The Sorcerer's Apprentice, The Nutcracker and Swan Lake, Maestro Classics provides the opportunity for both child and parent to listen together and put to words the mental images the music they are listening to creates. 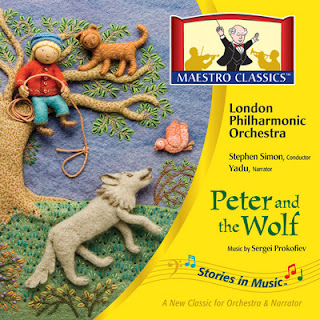 For this review, we received a physical CD of Prokofiev's Peter and the Wolf and a 23 page activity book insert. A separate curriculum guide was also available on the website that corresponded with the CD that has many activities that incorporated math, history,  science, language arts and geography lessons with the music.

Over the last few weeks, I have no listened to both the Russian version as well as the more familiar version of Peter and the Wolf probably 30 times.  I found very quickly that my kids, especially Ashleigh, loved Peter and the Wolf just as much as I did when I was their age.  Ashleigh requests listening to it at least every other day, she likes it that much.

could use my Amazon Echo to play them as we do not have a stereo and my computer's speakers are not loud enough for everyone to hear the music.  I'm grateful for doing this as the CD would probably be worn out by now had I not done so.  Ashleigh only has to tell our Echo to play Peter and the Wolf and it plays for her and she is happy.  She does this a lot.  Usually multiple times in the same day.

Through both the listening of the Introduction as well as the downloadable curriculum, the kids have quickly learned to differentiate between the different instruments used for each character. Whether its the bassoon, the French horn, the oboe or the clarinet, they can quickly identify which instrument is playing based on the sound.

It's also funny to listen to their running commentary while listening to the tracks. Garrett's favorite part is when the Grandfather slams the gate and he pantomimes the actions of the Grandfather every time.  Same holds true with the hunters and it's not uncommon to see both kids doing what I can only describe as an Elmer Fudd imitation while pretending to be the hunters searching for the wolf. 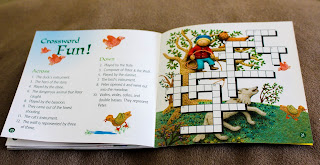 The curriculum and the activity insert are great additions to the CD and has some really great suggestions for projects and activities that correlate with the music.  Because of the huge Russian influence on the music (Prokofiev being Russian during the time of the Russian Revolution in 1917), many of the activities involve the Russian culture.  Using the curriculum as a guide, the kids have watched Anastasia (which led to a discussion about the Russian Royal family), have used rubber bands and boxes to make musical instruments, and discussed the Cyrillic alphabet. The activity insert consists of small lessons regarding Prokofiev, various instruments, and activities such as dot to dots, crossword puzzles and word searches.

I am so glad to have had this opportunity to share with my kids something that was such a wonderful memory for me when I was their age.  It has indeed fostered a love of music with the kids and has led to them using their imagination and creating their own descriptions of what they think is occurring in other pieces of music by greats such as Johann Sebastian Bach, as well as picking out the now familiar instruments they hear in each piece they listen to.

Posted by Brenda Prince at 8:00 AM