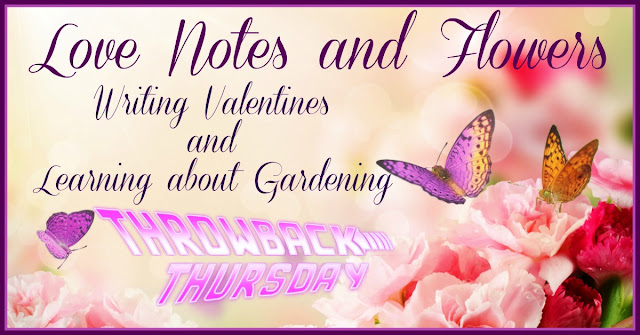 This time last year, the kids were mailing off Valentines and were learning about Gardening and botany as we prepared to set up our first garden in the back yard.   A year later and they mailed off valentines for other homeschooled kids on Monday and we're about to start clearing out the back yard once again to make a bigger/better garden.   This weekend I'll be placing an order with Baker Creek Heirloom Seeds for various flowers, herbs and vegetables.Last year, our garden experiment turned out to be a success. Even thought we made many mistakes in planning, such as planting at the wrong time and next to the wrong type of neighbors, we learned a lot and decided this year, we wanted to try it again.  This time, we researched what plants grow well with each other, what would be best for our growing zone and with our rocky soil.  Next weekend we will rent a tiller from the Outdoor Rec department here on base as none of us feel like breaking sod/ground for a 40 foot long garden.. haha

Our Aerogarden is still up and running although lately it's been growing a heirloom tomato plant that will be ready for transplant soon.  Ashleigh has asked that our next round of plants in it will be flowers though so I will probably order a kit for her soon as well. Gardening has turned out to be something we've come to enjoy.  I'm sure right around this time next year, we will also be writing about how we're planning the Spring planting once again :)
Friday, February 13, 2015

Valentines Day and Learning about Gardening

Valentines day is right around the corner and one with think with a elementary school on base, finding those cheap lil Valentines that schoolkids exchange would be easy to find but alas, it wasn't the case. The kids are involved in a Valentine exchange with other homeschooling kids and I figured sending out 35 of those lil cards would be easy peasy.. Just get the kids to write names, put them in an envelope and mail them out. How hard can it be, right??  HA!

Actually, I should start by saying that originally, I was going to have the kids make Valentines. My plan was to slap a handful of paint on them (pink for Ashleigh, blue for Garrett) and have them put their hands on a piece of paper in such a way that it formed a heart.. Then I would get them to each sign their names and mail those off. Well, the kids weren't having any of that so I just decided what the heck, we'll buy the cheapo ones and mail them out..

I sent my husband out to the BX here on base with the mission of buying approximately 40 valentines per kid (I figured two boxes of 24 each).  He comes back shortly after and states that there were none of what I was wanting; that the only Valentines they had were boxes of 12 for 5 bucks each and he wasn't about to spend 40 bucks on Valentines (not that I blame him)..

Our next step was to drive to Walmart and pick some up there.. Driving to Walmart isn't a big deal for most people but for us it is a huge ordeal. Its a good 45 minute drive to Walmart.  Luckily, they had Valentines. As I managed to find some really great Veggietale valentines, at the kids eye level were these 3D ones - Ashleigh immediately determined she wanted the 3D cats and dogs while the other 3D option for boys was guitar/skulls. Not the best options to send to some pretty religious families.. I ended up getting boxes of both. I wish I hadn't - the 3D ones turned out to be hard to write on and the kids couldn't manage so for the 12 of those we sent out, I had to write their names for them without smuging.  But, the others they managed to write on themselves and I was pretty happy with their writing (for the most part - Garrett got a bit sloppy after a bit).

Since we were already at Walmart (or Wally World as my kids call it) we decides to look around. As we moseyed over to the garden area we started looking through all the wonderful seed offerings and decided that this year we were going to try to do a full garden in the back yard.

In the past, I have grown tomatoes but something always seems to happen to my plants right before they are ready to start producing.  One year, I had this absolutely beautiful beefeater plant that was making some really nice sized fruit.. One day I went out to water it and noticed it didn't look near as good as it had been looking - then I noticed about 2 inches of the main stem was completely gone where a squirrel chewed it in half. I tried to reroot the plant but it was so big that it couldn't produce roots big enough to support it so I lost that plant..   Last year, I had a really nice Russian Black Heirloom tomato plant that was looking great but needed some extra soil in its pot. I bought a small bag of potting soil.. Not sure what the heck was in that soil but when I watered it, the run off in the bottom looked like coca-cola. Next thing I knew, the plant was dead.

So to say that my husband wasn't too thrilled about the idea of my wanting to spend money on a garden would be a bit of an understatement.

We did pick up some seeds however. He decided on some pumpkins in the hopes of having some nice ones for jack o lanterns in October. I picked up some vegetables such as Kohlrabi, onions, lettuce, radishes, and snap peas.  We also bought a couple of new tomato plants - a big boy variety for me (so I can get some nice green ones for fried green tomatoes) and a Solar Fire variety for my husband. The idea is that this weekend, we will prepare a small 4 foot by 4 foot plot near the house for a garden .. Any squirrel crazy enough to go after the plants there will quickly meet my dog..

Then, that night, I received an email from Amazon telling me about their wonderful "Deal of the Day"..   They were offering  the Aerogarden Extra LED for only $139 plus free 2 day shipping since I'm a prime member.  Well, I'd been wanting one for a LONG time now so I gave hubby what I call the  "Puss in Boots" eyes and asked nicely. My wonderful hubby said go ahead and I had that thing ordered quick as that.. LOL

The tracking said it was due to arrive today via UPS so I waited with baited breath all day for that brown truck to arrive. He showed up around 5pm. By 530 I had the Aerogarden completely set up and seed pods already inserted. This led to a really great conversation with Ashleigh and Garrett in regards to hydroponics because they wanted to know where the soil was. We decided we would start keeping a photo journal and document the growth of the plants as well as observe the root growth, which will be great since the kids have been learning about weights and measurements lately.


We ended up "planting" 7 pods :   two mighty mini cherry tomatoes, 1 mint, 1 basil, 1 dill, 1 chive and 1 parsley. Ash helped me put the nutrients into the water and put the caps over the plants and was completely amazed by how bright the light is.

This weekend my oldest will be in Monrovia with her high school Robotics team for Regionals so I guess the rest of us will go out and set up the garden and plant our various seeds since most of them need to go in to the ground now (except for my husband's pumpkins which will wait til May).    I might even break out the Apologia Botany book and start some lessons with that as we learn to grow our own food :)
Posted by Brenda Prince at 5:15 PM