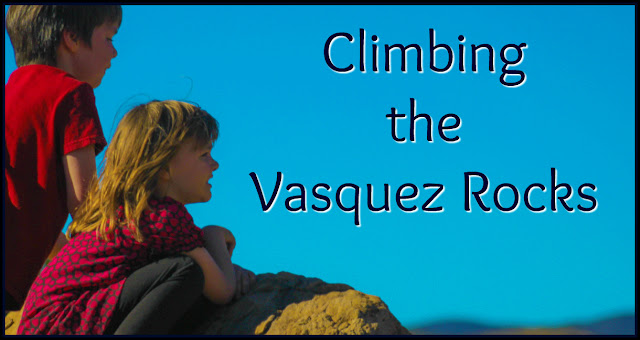 With Monday being President's Day and Dad was off since it was a government holiday, we decided to take the class out of the classroom and head out to Agua Dulce to visit the Vasquez Rocks Natural Park. Located on 932 acres, the park is located in the Sierra Pelona Mountains and contain many gorgeous rock formations that were formed from Volcanic and earthquake activity as well as from erosion.  The park is named for Tiburcio Vasquez, a California bandito who evaded capture from the law by hiding among the rocks from 1873 to 1874.


Living in Southern California, the park is less than an hour away so we felt that it would be a great day trip for the kids before the weather started getting too hot.     So we packed up a picnic lunch and headed out early in the morning for a fun filled day of hiking and rock climbing.

If these rocks look familiar, it's most likely because you have seen them time and time again on TV and in movies.  Star Trekkies will instantly recognize them as the sight where Captain Kirk fought with Gorn.  Other TV shows that filmed at the rocks have been A-Team, The Outer Limits, F-Troop, and Murder She Wrote.  As for the big screen, they were also in the recent Sci-fi movie John Carter, The Flintstones, and Dante's Peak among others.

The weather was beautiful and the the temperatures were only in the mid 70's, perfect for exploring.  We explored front part of the park, close to where we parked for the first hour, where we studied various plants such as cactus and juniper (we also found some wild dill), lichen, and mosses.  We also found a few larger caves that we were safely able to explore and climb through.

This particular cave was rather "kid friendly" with a pretty wide opening that opened to a vault with a ceiling of about 5 foot high.  It had a climb of about 20 foot once inside that led to a wide opening with shelf where we could take a break and look around for a bit. 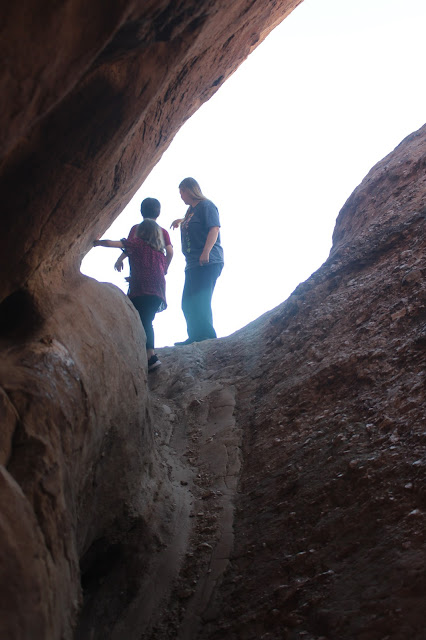 Here's looking up to the Upper Opening .. The climb wasn't as bad as this picture makes it look. 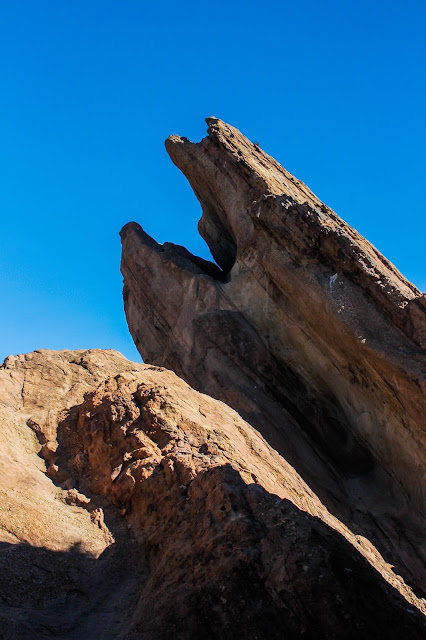 Throughout the park, there were lots of crevices and slopes that the kids could safely climb, however, we did decide that we will be investing in hiking books for everyone. 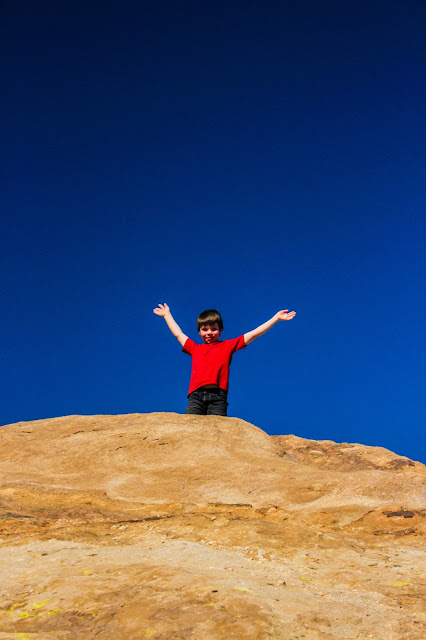 After about an hour of climbing, we decided it was time to take a break and to eat some lunch.  After a wonderful picnic lunch of sandwiches, apple slices with peanut butter and trail mix, string cheese and lots of fluids, we were ready to explore some more..

We decided to check out this particular rock, one of the highest in the park.  This rock is easily 150 foot up, maybe more.  (Not the guy standing by the RV at the bottom of the picture).. 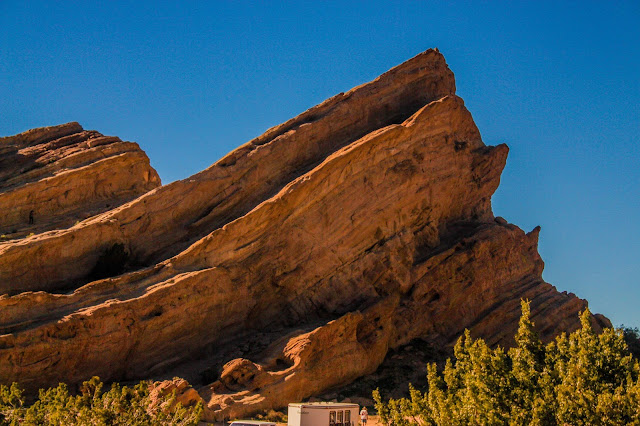 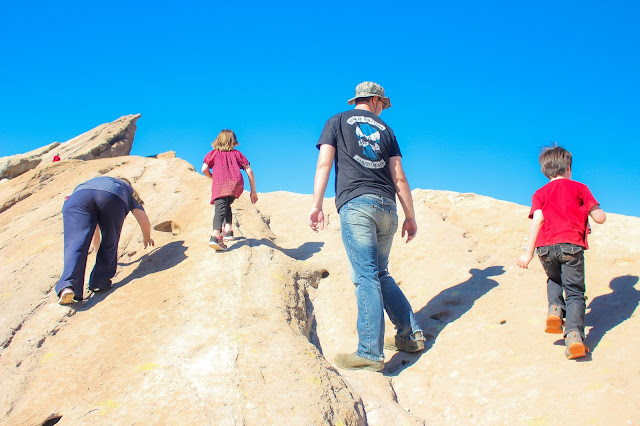 We got about halfway up and it got a little too steep for Ashleigh and Garrett (and Mom too because it was hard to safely climb with the camera) so we perched where we were at while Dad and Alyssa climbed to the top.  When they returned, they said that it was better that the kids hadn't made the climb as it was extremely windy at the top and it would have been unsafe for the kids.

After that climb, we decided to stay at ground level for a bit and check out some of the trails. We found this really neat area where we could really see the striations of the various layers of the stone as well as possible sleeping sites of the Tataviam American Indians. 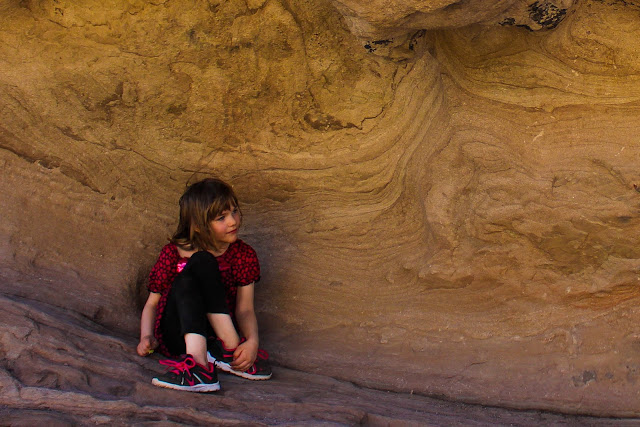 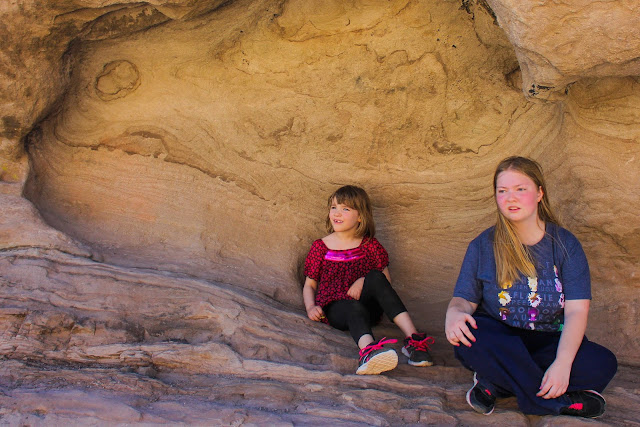 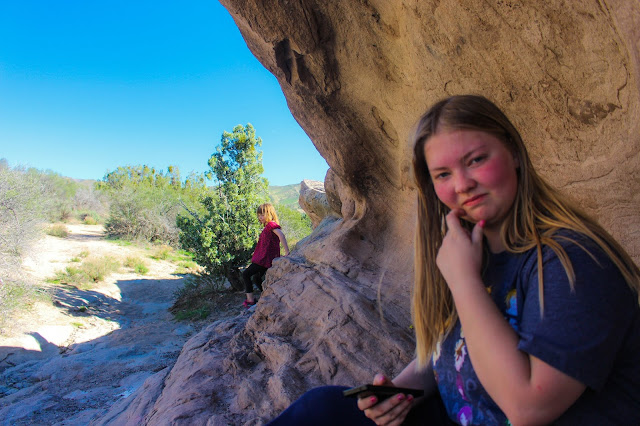 While the kids were pretty loud while on our hike, we did manage to see a few birds and lizards who were enjoying the beautiful weather.  This lil guy was enjoying sunning himself on one of the rocks and was very nice to stick around while we took photographs of him. 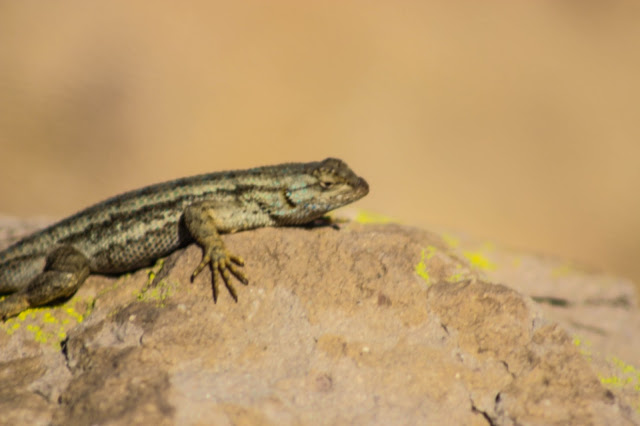 There were so many really neat rock formations that we found (and we only explored a very small percentage of the park). 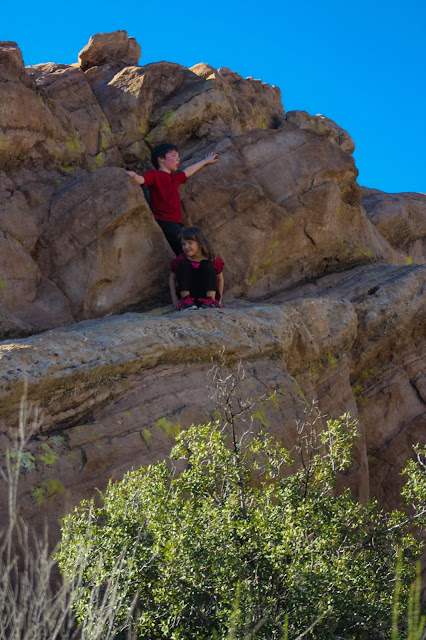 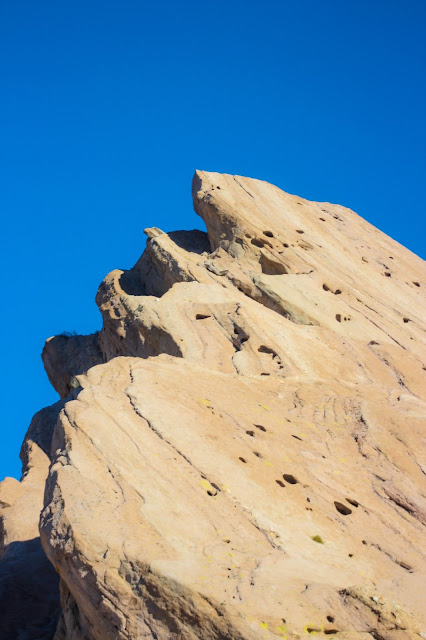 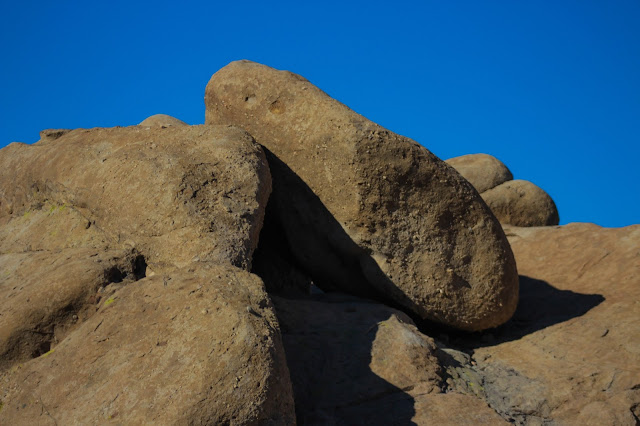 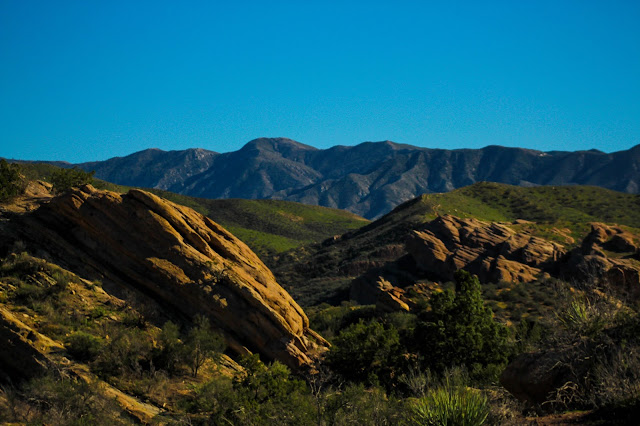 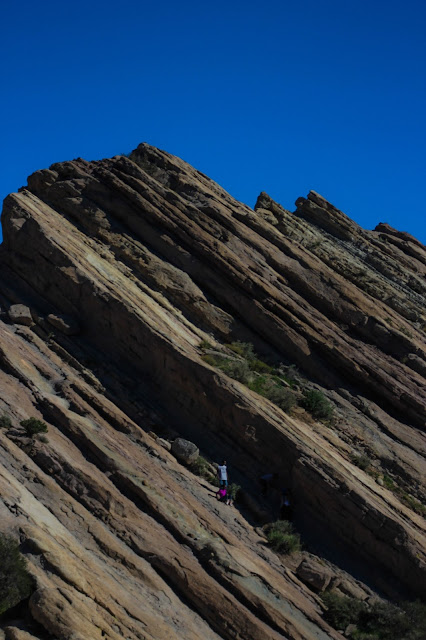 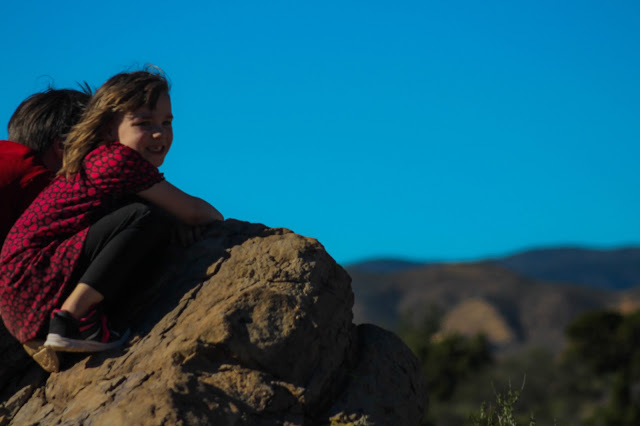 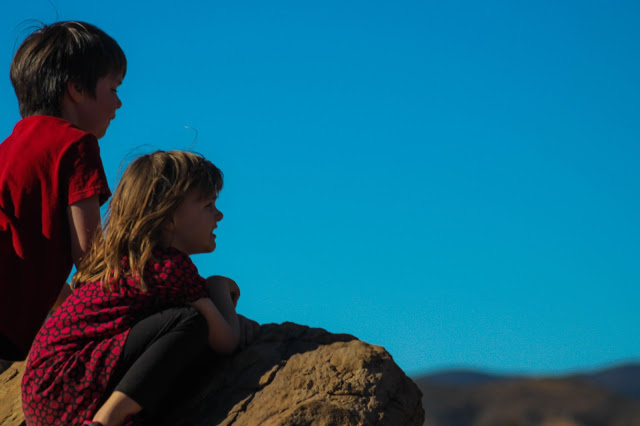 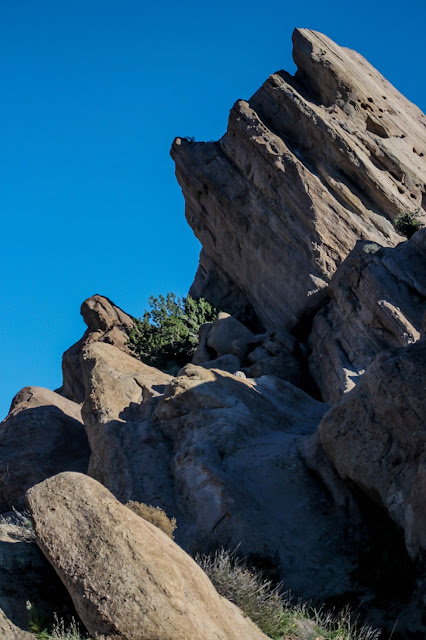 After a few hours of hiking and climbing, we headed over to the Visitors Center/Gift Shop area for the park.  There we got to see a Red Tailed Hawk who was enjoying her dinner and then inside we found some displays of various snakes and arachnids located in the park. (Luckily we didn't find any of those).

The Gift Shop proved to be one an unexpected highlight of our trip.   Staffed by volunteers who enjoy helping educate the public, especially children, we met a wonderful older woman who spent a great bit of time showing the kids various displays and items that pertained to the spiders in the park.. The spider in the picture above had molted three times already and so the kids were able to look at (and even touch) the skins that had been shed.  They were also shown the borrow of a Trapdoor Spider where they were able to feel the silk lining inside, examine the silk hinge of the door and see how the trapdoor actually worked.

We had such a wonderful time climbing and hiking and cannot wait to go back again.  We also found out that the Visitor center does various displays and presentations about wildlife throughout the week and will have to make plans to maybe attend a few of those during the summer.

It was an amazing field trip and I'm sure the kids will never forget it :)


This post is part of the the Homeschool Review Crew's Field Trip Inspiration Round up. For other great field trip ideas from around the country, be sure to click the image below :)

Posted by Brenda Prince at 9:26 PM