Pick Up Your Cross and Follow Me ( Verse of the Week) 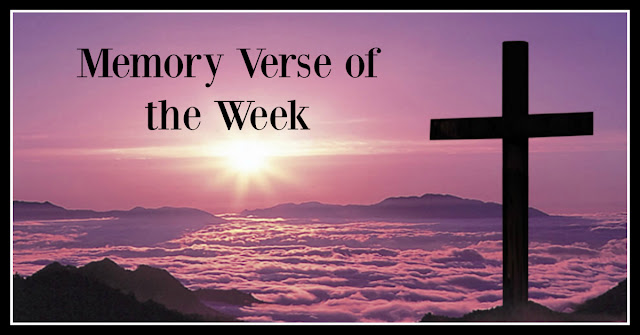 Last night my husband and I took the kids out to dinner and as we sat waiting for our food, as well as while enjoying our meal, my husband and my teenage daughter began asking me questions in regards to the Bible, faith and God.  While I will never profess to be a master at knowing all, I was very grateful to have actually began the process of digging into the scripture and I felt like God provided me the words to speak to them. I even had my husband stating he would be interested in learning Theology :)

Anywhooo, the kids are currently working on their fourth memorization verse which comes from the book of Genesis.  Once again, the wording is coming from the NIRV from Garrett's Faith Builder's Bible from Zonderkids.

Then the Lord God formed a man. HE made him out of the dust of the ground. God breathed the breath of life into him. And the man became a living person.    Genesis 2:7

I gotta say, I'm pretty impressed with these two lil kiddos as they have done really well memorizing each of the verses we have done so far.  And they have progressively gotten longer each week, yet they didn't bat an eyelash :)

As for my own Bible studies:  As I mentioned last week, I've been working through three different studies.. This week, my verse is coming from one of the lessons in "Into The Word" by Anne Graham Lotz (whom I only recently discovered and I am finding that I REALLY like).    The verse I'm picking for the week had me thinking more than I had in the past. It's a verse I've read before but I guess my mind misinterpreted it or I just wasn't ready for the meaning behind it, or maybe I just looked at it on a deeper level..  But suddenly I saw it in a different way.

Then Jesus said to his disciples, “If any of you wants to be my follower, you must turn from your selfish ways, take up your cross, and follow me.
Matthew 16:24          (NLT Translation  from BibleGateway.com)

For whatever reason, I always just felt this verse was about the fact that people would not like Christ's followers, as they despised Christ himself, and so he was saying for them to accept that fact and follow him, the "Cross" in this case being picking up the humiliation and the rejection in order to be a follower.. But as I looked at other verses such as 1 Corinthians 6:19-20, 1 Peter 2:24, and Romans 8: 12-14, I started to see there was more to what Christ was telling his followers than what meets the eye (which, honestly, is pretty typical of Jesus)..

I now see this verse as Christ telling us that HE paid the price for our sins on the Cross. He had the nails through his hands and feet, he wore the crown of thorns, and he suffered and endured a pain none of us will ever have to feel. He paid the price but that cross he hung from was OURS to bear, it was our sins he was paying the price for, not his own.

I started to see that "taking up the cross" in this sense actually meant honoring that sacrifice by leaving behind our sinful ways and choosing to live by the guidelines Christ set for us.  We should follow the example Christ set for us.

It amazes me how I can read the same verse on multiple occasions and suddenly see it in a different light.  Maybe it's because the more that I read, the more open I am to Jesus and the lessons he left for us.


Now it's your turn.  Do you have a verse that you're working on this week in your homeschool or in your life?  If so, please feel free to join our weekly linkup.  We only have a few small rules for you:

An InLinkz Link-up
Posted by Brenda Prince at 3:04 PM