What' In Kenny's Pet Treater Box?? 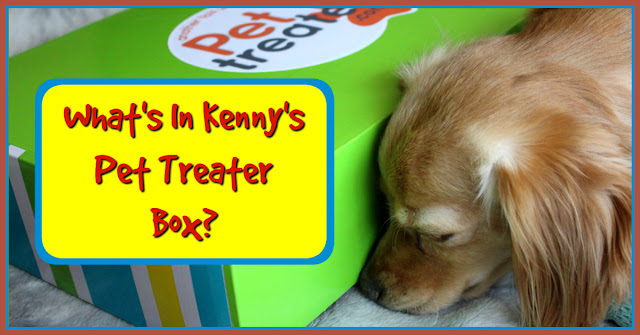 This week has been the week of Subscription Box Deliveries .. and Kenny has been spoiled rotten this week, for sure.  He had a second delivery this week and received the June Pet Treater Box.

Pet Treater is a subscription service that sends your spoiled poochie treats, toys and other dog related items to your door every month.  They're a bit unique from other pet subscription services as they are very personal (there's a letter every month addressed to your pet) as well as there's always a few items for the human.  Boxes come in Small (up to 20 pounds), Medium (21-50 pounds) and Large (51+ pounds).  Kenny receives the Medium box even though he's not quite 21 lbs. The price for the Pet Treater box is $24.99/month with a a month-to-month plan.

This was our first Pet Treater box and when we signed up we used Coupon Code PT-BED to get a free pet bed with our first box.   So when we got up and found a big box outside our door, we knew that the goodies had arrived.   Even Newton showed up temporarily to see what was going on. 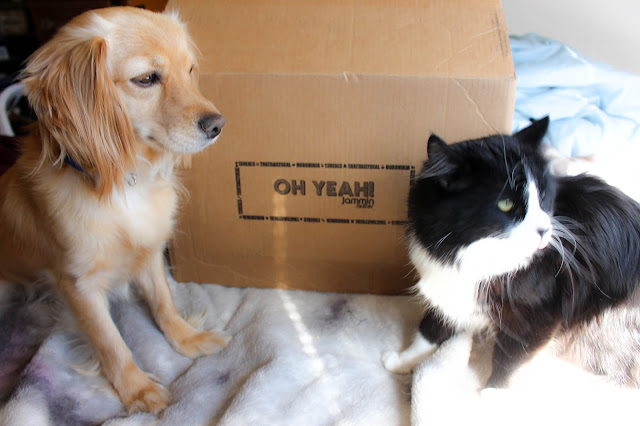 Inside we found the bright colorful Pet Treater box. 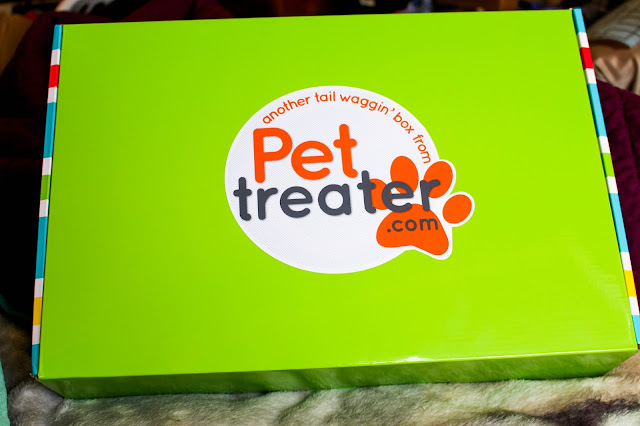 And underneath the box folded up was our free pet bed. 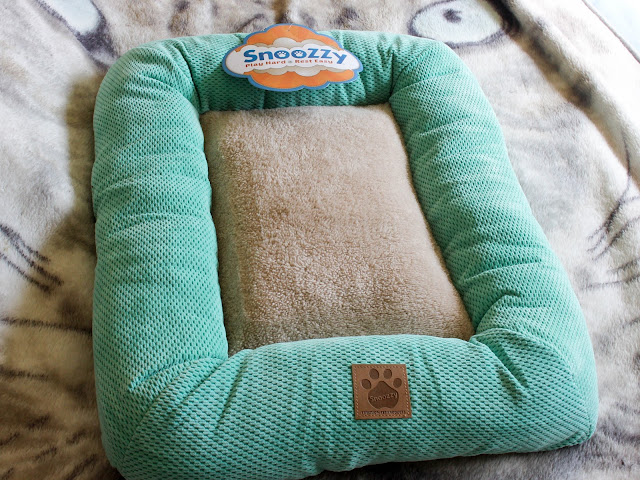 Each box receives a different pet bed that is picked out by Pet Treater based on your dog's size and sex.  Since Kenny is a medium sized male dog, he got a more male orientated pet bed, but I have seen everything to Pink Zebra print beds for small female dogs.

Our pet bed turned out to be the Precision Pets Snoozzy 25x20 inch bumper crate bed in Ocean Wave Aqua.  Honestly, this is a really nice pet bed and way more than I expected for a freebie. I did look up the bed on Amazon and found that they sell it for $32.52 so not a bad value at all.   Kenny immediately tried it out and found it worthy.  (And now it sits on my couch where he is currently dozing).

With the pet bed out dealt with and Kenny relaxing, we dug into the actual subscription box. Upon opening, you can see this box is jammed pack with goodies.  And there's the letter addressed to Kenny. Inside was a welcome letter addressed to Kenny as well as a letter telling us about another dog who was adopted from the shelter.  One of the great things about Pet Treater is that for every box purchased, they supply either a pet bed, blanket, or bag of treats to a local shelter for animals in need so not only is my pound puppy getting spoiled rotten, we're also helping another pound puppy who hasn't been adopted just yet.  That was one of the main reasons I started the Pet Treater subscription - I had this ordered even before Kenny came home. LOL

The June box theme was called "Unleashed" but I really didn't see how anything in the box really fit that theme..  There was a card telling us the theme and that next month's theme is "Dog Days of Summer". 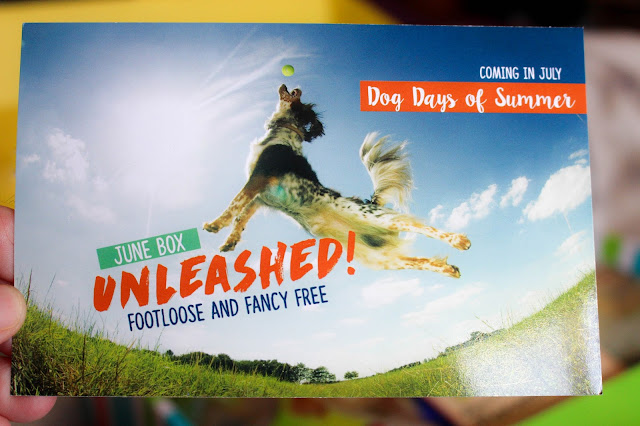 Now for the goodies!!! 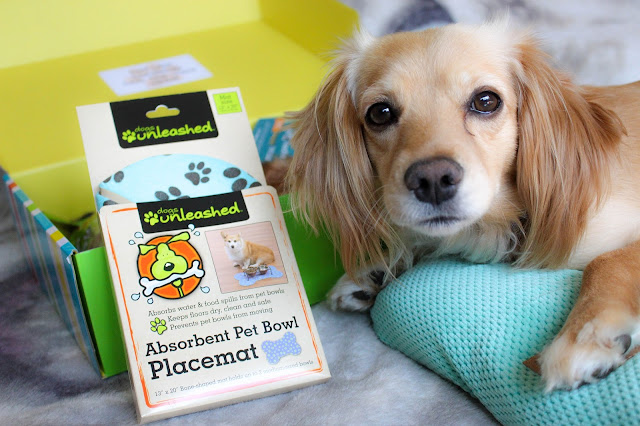 The first thing we pulled out was an Absorbent Pet Bowl Placemat from Dogs Unleashed (maybe that goes with the theme, I guess?). This bat is shaped like a bone and measures 13x20inches.  I found this on Amazon for $6.99. 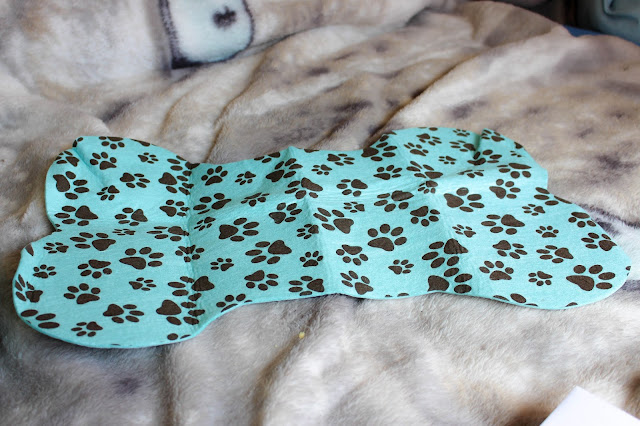 Kenny isn't a sloppy eater/drinker but his bowls do tend to "travel" a bit while he's eating so this might be nice for him.  It's not particularly thick and is made more like a shammy towel  so I don't know how grippy it will be to our tile floor but it will be worth trying :) 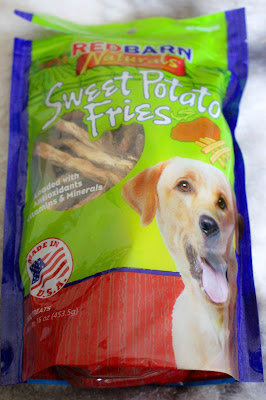 Our first treat from our box was a very nice size bag of Redbarn Naturals Sweet Potato Fries.  The total weight of this bag is 16oz and contains a lot of the product.  These say they are made only of dried USA grown sweet potatoes which are a good source of vitamins, minerals and complex carbohydrates. These treats are grain free, gluten free and 100% vegetarian.  I found these treats on Chewy.com for $13.49 and on Amazon for $11.96.

Kenny seemed to like these well enough. I gave him one upon opening the bag (before I took pictures) and he gobbled that one up no problem.  Kenny is a chewer and I expected the treat to be gone pretty quick so I was pretty surprised that it took him a good 5 minutes plus to have the treat completely devoured.  However, when I gave him the second treat, it was after he had had one of the second treats that were in the box and he really liked those more so he was more interested in getting a second one of those.. LOL   Kenny is very peculiar about his treats and he like what he likes I guess. . LOL 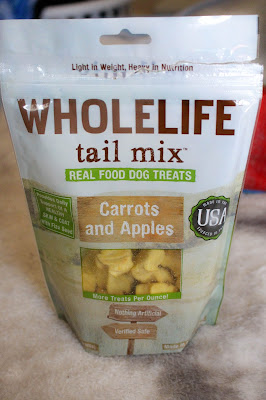 Here's the treat that won Kenny's heart from this box. Unfortunately it does appear that this particular treat has been discontinued and so Pet Treater probably bought up some of the remaining product for a discount.  Such a shame as Kenny really likes these treats.  Unfortunately, because it is a discountinued product, I cannot find a pricing for these treats.  However, other treats from Whole Life appear to run between $13-15 per page on both Amazon and Chewy.

Even more unfortunate is that the bag is only 2oz and contains about 30 treats which means I'll have to give them to him sparingly as it appears that once they are gone, they are truly gone and Kenny will have to find another new "favorite" (although he's still enjoying the S'mores treats from our Barkbox and I'll probably order him more of those here in the upcoming weeks.. lol)..

Anyway, ingredients in these particular treats are chicken, potato, water, apples, carrots, flax seed, and sea salt.  They look and feel like they are probably freeze dried puffs and they are very light weight.  And of course, they are made in the USA.

This appears to be another discontinued item from Happy Tails.  This toy is about a foot long with a rubber handle on one side and a canvas tug filled with stuffing.. Seems simple enough.  Kenny didn't show much interest in it, which is shocking because he loves to play tug of war.  But I think part of that was he was super comfy in that new bed of his..  I'll let Charles try it tonight with him as Charlie tends to get Kenny to play much rougher than I can.  I found this item on Amazon as a $6 add on item. 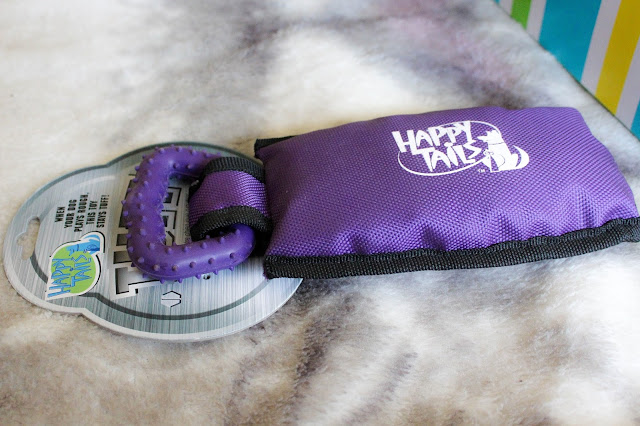 Okay, I'm going to be honest.. This thing looks like Coon Roadkill more than anything.. LOL  This is a 17" Faux Racoon hat with a crinkle interior and a squeaker in the tail and is designed for small to medium sized dogs. It is stuffingless so no mess but anyone who sees this laying on your carpet is going to think they just entered Deliverance or something.. LOL    I did find this toy on Amazon for $10.82

And of course, Kenny liked it. 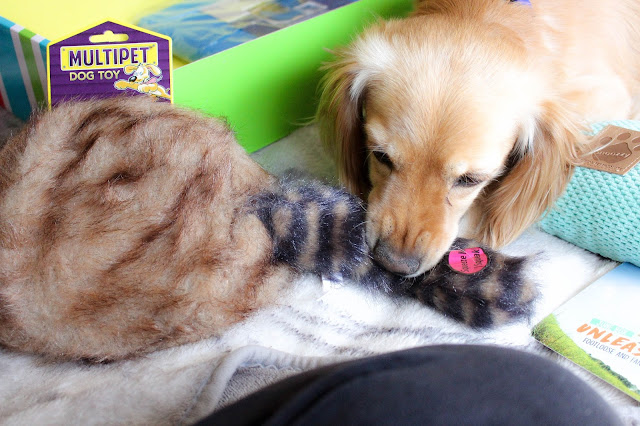 Every month, there's an item for the human.. I've seen previous boxes that have had a silicone pot holder,  a knee padding for gardening or bathing your dog, a salad tote and even a lil artwork box to put on the shelf.. What did I get???? 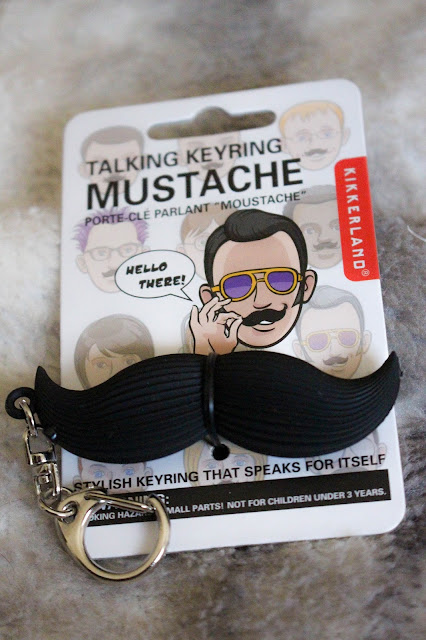 Umm. yeah, that's going into a junk drawer and will probably never see the light of day again.. LOL

However, they made up for it with this :)

This is a 10.5'x10'  fabric seat cover to prevent mud, fur and whatever other yuck from 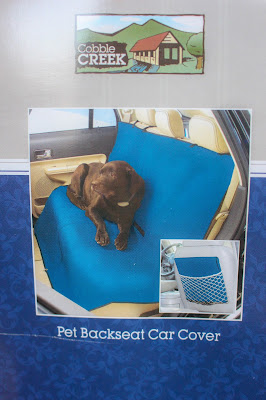 getting on the backseat of your car when your pooch is in the car with you.  Honestly, I can see this coming in handy with the three humans who usually sit in the backseat as well ;)   This snaps behind the headrests and then draps down the entire seat to allow for full coverage of your seats.

It also looks like it zips up to keep the yucky parts closed and sealed when not in use and can fold up to fit into the map pouch in the back of some seats.   It does appear to be made of washable material but I haven't taken it out of it's packaging yet to check the label to see what it's made out of and if indeed it can be thrown in the wash or not.

I can see us using this, especially with upcoming trips camping and to the beach, ect.  And like I said, not just because of the dog but to keep the kids from getting my back seats dirty.

I found this product for sale on Amazon for $8.98 and a similar item (but made by a different company) at Walmart for $15.98.

Overall, I think this was a great box.. I know that Pet Treater is a fairly new company in the Pet subscription box game so I can forgive the Warehouse toys.  Both bags of treats we received were still within the expiration date on the bag.  I love the fact that my purchasing a box allows for a pound puppy in Tennessee (where Pet Treater is located) to get a pet bed, treats, a blanket or a toy so in a way adopting Kenny not only helps Kenny but continues to help other dogs in need.  I also like that all the treats are made in the USA. And I like that there's more to the box than just treats and toys like other subscription boxes - the Car seat cover and the Slip mat will both be a welcome addition.  The Mustache keyring?? Not so much ;)

Value wise, the cost of the box on a month to month subscription is $24.99 (I believe it is cheaper when you purchase a longer subscription length but that requires full payment up front). I estimate that the total value of the items in the box comes out to roughly $60, not counting the pet bed, so it's a really good value.

If Pet Treater seems like something you might be interested, be sure to use the Coupon Code PT-BED when you check out so that you can get your free bed with your first box.
Posted by Brenda Prince at 8:13 PM