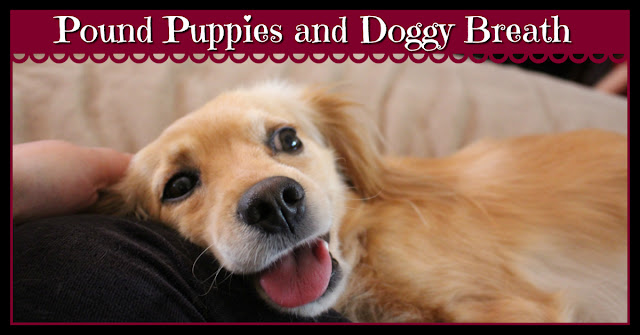 A year ago, it broke our hearts to give up our dog, Lex.  A 5 year old Siberian husky that was a present for my husband,  Lex was a bit more of a dog than we could handle - he never wanted to be inside yet we constantly lived in fear of getting in trouble for him being outside all the time.  My husband was always too busy to take him out for walks and there's no way I was up to the task of running with him.    But the biggest factor was that Lex did not want to be an inside dog AT all.. When the weather was 80 or below (especially really below), he refused to come inside and would fight to get back out immediately. (He did however, want inside during the hot temperatures in the summer but demanded to be back outside as soon as the sun went down.)

So with heavy heart, we agreed to allow another family on base to adopt him.  There are days I seriously regret letting him go, as he is an amazing dog but I felt that another family could offer him more of the type of home and exercise Lex needed.  Lex was also the first pet I have ever voluntarily let go - all my other pets have either died of an elderly age or are still with me and are at an advanced age, so agreeing to give up a pet was extremely hard on me.

However, I really wanted a dog of my own.. I wanted a lap dog who wanted to be indoors, who wanted to sit on the couch beside me and sleep on my bed.. I also wanted a dog that I could take out walking but who wouldn't require me to run 3 miles just to provide proper exercise.  I was pretty surprised when my husband agreed to allow us to get another dog but once I had the green light, I started checking at various shelters online.

Originally, I thought I wanted a Pomeranian puppy.  I mean, who doesn't want a perfect ball of puppy fluff.  However, there was no way I would buy a puppy from a pet store and the breeders in this state want way too much for a puppy. (I cannot justify paying 5K for a pet).. I started checking online at the various shelters in the area in hopes of finding a younger Pomeranian but I also didn't limit myself to any particular breed. I just knew I wanted a smaller dog that wasn't high energy and who would be happy being a house dog.

Then I saw the cutest dog on Petfinder and I just kind of knew that was The One.. A 2 year old stray found on the streets of Rancho Cucamunga and only called "SmDog17" (which was which kennel he was located at the shelter), he was a gorgeous lil gold cocker spaniel mix.   The shelter was a 2 hour drive away from here and required us to get up way early to be there at 10am when they opened that Saturday (the first day he would be available after his stray hold).

We got to the shelter 15 minutes after it opened and my heart broken to find out that SmDog17 (whom they now began to call Kenny) already had someone interested in him and they were doing a meet and greet already.  So with heavy heart, we had a meet and greet with three other dogs - a 8 week old Italian greyhound/Chihuahua mix who they called Winnie, a 1 year old Maltese/English Spaniel mix named Dexter with a huge underbite and a 1 year old Cocker Spaniel mix named Nikki.


They brought Winnie out first and she was a very small bundle of energy but we showed a few signs of dominance/aggression that I was uncomfortable with. She was also so small that I was afraid the kids would hurt her.

Dexter was next - and he was the most unsocial dog we had ever met - he wasn't mean or aggressive, he just was anti-social.  I knew that while he might come out of his shell eventually, he was the type of dog who would NOT be happy on a military base that constantly had sonic booms.  Although, Charles jokes that we should have adopted Dexter for nothing more than just the comic relief..

Before we met Nikki, we were allowed to meet Kenny.  At this point, we were told the first family was meeting other dogs they were interested in before making a final decision.

Kenny came out happier than any dog I had ever met.. Tail wagging, big puppy eyes, jumping up and giving Ashleigh and Garrett huge kisses.. Everyone instantly fell in love with him but I'll be honest, I didn't interact with him at all - I was too afraid that I would fall in love as well only to have the first family adopt him..  So I asked to meet the final dog, Nikki. 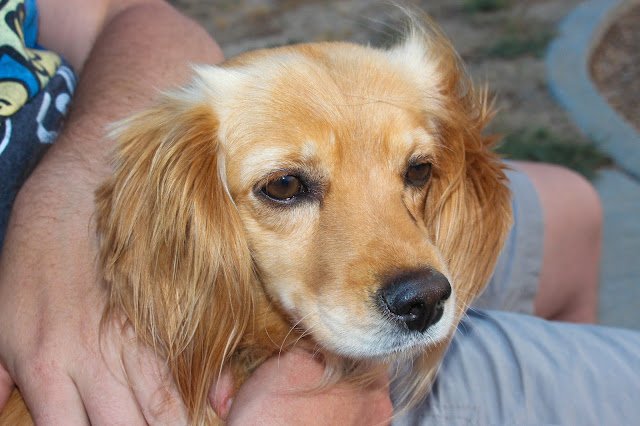 Nikki was an extremely shy dog whom we were told had already been returned to the shelter once because of destructive tendencies from separation anxiety.  She was absolutely beautiful but very skittish. But part of me allowed her into my heart because I just knew Kenny wasn't going to be ours and I thought I could provide a forever home for this poor rejected dog.

Before my final decision, I asked our shelter guide to find out if Kenny was indeed adopted.. He came back 5 minutes later and told me the good news and bad news - good news as that Kenny was able to be adopted (the first family had passed on him) and the bad news was because he wasn't fixed, he couldn't come home that day..

One would think it would have been an easy decision - I came for Kenny, Kenny was adoptable, Kenny seemed perfect. But it broke my heart to leave Nikki behind because I was afraid nobody would adopt her.  Charles thought I was nuts, why would I pass up on Kenny with any thought at all..

I asked for one final thing from our Shelter guide - could he bring Kenny out one more time, since I didn't interact with him at all (but had interacted with Nikki) so that I could see how I felt, not what Charles and the kids felt.   I sat on the rocks in our Meet and Greet area and waited and he brought Kenny back in, took the leash off and Kenny ran right into my arms and covered me in kisses..


Kenny made his point loud and clear - he was OUR dog and we were HIS family.  We adopted Kenny.

*note* Nikki was adopted that day as well and Winnie and Dexter were adopted later that week.

The hardest part was leaving Kenny behind that day.  After filling out the paperwork and pay his adoption fee ($100 which included shots, microchip, and sterilization) I had to go back to the kennel area and put an ADOPTED tag on his Kennel.   As soon as he saw me he started whining and I gave him a few pets and told him I would be back on Wednesday to pick him up.. And that's exactly what we did.. We were at the shelter within minutes of them opening and in less than 30 minutes we were on our way home.

In the week that we have had Kenny home, it has become very apparent that we made the right choice.. He has become a member of the family and you would thing he's been here his whole life.  He's found his spots (either sitting on the couch next to me, on the doogy bed on the living room floor, or on my bed), he's learned quickly not to bother with the cats (and lil Newton has already gotten to where he follows Kenny around constantly) and he's already learned what spots he likes to go walking to when we go for nightly walks.   It's also become very apparent that this poor dog belonged to someone at one point in time and was use to grooming and training - yet he also acts like someone abused him at one point.  He's extremely submissive and often approaches with head down like he's awaiting being hit, many times shaking like he's scared.


It turned out he was already completely house broken (YAY!!), shows no signs of food aggression, and walks nicely on a leash (even if he wants to chase the bunnies).. I found the perfect dog. In the week we have had him, he's already been given 2 doggy beds, lots of toys, lots of treats and a subscription to both Bark Box and Pet Treater (which I might even start letting Ashleigh do "unboxing" videos for.. haha).  I've bought him puppy shoes to keep his feet from getting burned on the hot concrete and sand (it's currently over 100 degrees here right now) and patterns to make him cute little coats.    As he's getting over Kennel Cough and has a stuffed nose, I'm even cooking him food (chicken and rice) until he's feeling 100% and I've already got a Pinterest board dedicated to ideas just for Kenny.  He's exactly the dog I wanted and hopefully, whatever his previous owner did to him will be a forgotten memory.

Welcome to the family Kenny..
Posted by Brenda Prince at 5:14 PM