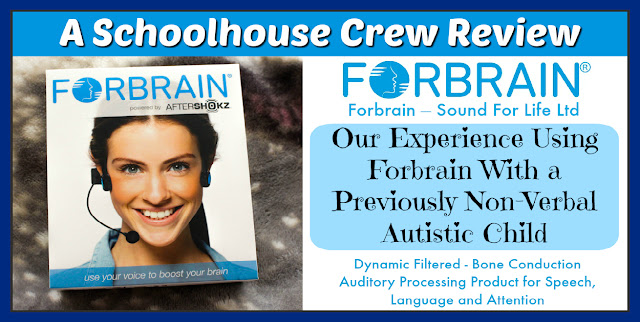 For the first 7 years of Garrett's life, he was completely Nonverbal and it has only been through homeschooling and repetition that he's finally able to hold a conversation with us. However, at 9 years old his verbal skills are on par with a 3 year old (after all, he's only been speaking for 2 years).   So when I was given the opportunity to review the Bone Conduction Headset from Forbrain - Sound For Life Ltd I knew it was something I desperately wanted to try with my son. We have now been using Forbrain with Garrett for the past 6 weeks and the difference it has made in his confidence, his enunciation and his reading skills have been amazing. 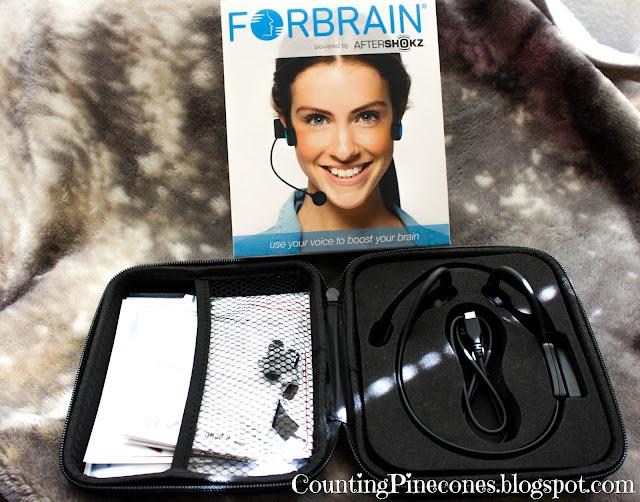 For this review, we were given one Forbrain Unit equipped with rechargeable internal battery, a hardshell zippered carry case with molded foam insert that protects the unit, 1 USB to Micro USB charging cable, 3 spare covers for the microphone, as well as the User Manual and Quick Start Guide.  The Unit also comes with a 2 year Manufacturers Warranty.

The Forbrain device uses Bone Conduction rather than air conduction to provide a new way for you to hear your own voice.   Bone conduction is pretty much exactly what it sounds like - by causing vibrations to the bones in your head you are able to hear your voice the way others hear it.  This amplified sound transmission is then sent directly to the inner ear as well as to the nervous system and brain. 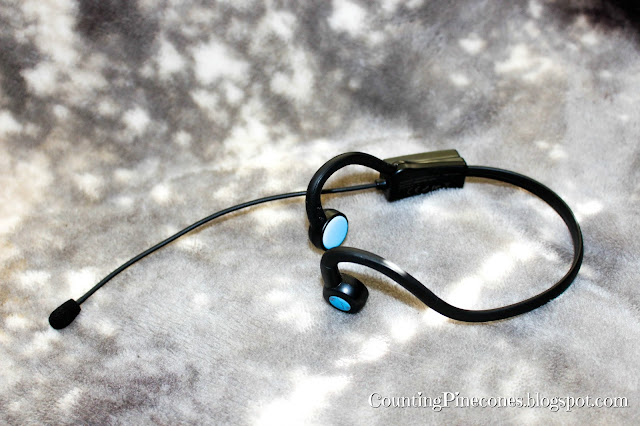 The lightweight headset itself simply consists of a dynamic filter, two vibrating transducer membranes that sit over the wearer's temples and a microphone to speak into.  Controls for the unit (on/off button as well as volume up/down) are located on the dynamic filter housing as well as a blue power indicator light.  The internal battery charges quickly using a USB to Micro USB cord and takes about 2-3 hours for a full charge.  Once charged, the unit is ready to use for up to 6 hours of use before needing another charge.

All together, the dynamic filter, dual transducers and the microphone create an auditory feedback loop that allows the wearer to hear themselves clearly.  This technology helps with various aspects of speaking and memorization, attention span, short term memory and verbal performance.  By wearing Forbrain  for 20 minutes a day for 6 weeks, Forbrain can help improve all these areas and help build the users confidence with their verbal skills.

It should be noted that Forbrain should not be used with individuals who suffer from more than 80% hearing loss, uses Cochlear implants or those who suffer from Epilepsy or Parkinson's disease.


How We Used It and What We Thought

We LOVED Forbrain, but to really understand why we're so impressed with it, I should go back and explain how we got to where we are with Garrett.

Garrett was diagnosed nonverbal autism when he was 5 years old.  He did not speak at all for his first 7 years of life.   In those 7 years, we did early intervention speech therapy five days a week, we bought all the "speak and say" style toys we could find and exposed him to videos and tv shows designed to teach language arts.  We were told to put his sippy cups of milk up on top of our entertainment center and not give them to him until he said "milk"..  It didn't work. Instead I had an extremely frustrated little man who couldn't communicate to say he wanted milk and would instead throw himself against the floor in explosive fits of rage and who was locked in his own silent world.

The above video was taken when Garrett was 6 years old.  He was upset because I had put on the wrong Blue Clues video but I had no clue which one he wanted and he couldn't tell me.  Garrett's only communication with us (if he tried to communicate at all) were grunts and whines and ear piercing screams.

The whole reason I started homeschooling in the first place is that the public school system felt there wasn't much to be done as far as educating Garrett.  They felt he would never communicate,  he would never read, he would never be able to do math and he would never be able to participate in a classroom setting.   Their suggestion was to ship him off to an outside district that had a "Skills for Life" program where he could at least learn to take care of himself.  I knew that there was more to Garrett than just hoping he could eat with a knife and fork properly and so we kept him home.

Today, Garret is no longer considered Non Verbal.  It was a long road but eventually he found his words. However, he is so far behind in both his reading and verbal skills because of the delay.

Prior to using Forbrain, Garrett had very little as far as pronunciation and enunciation skills.   Part of this is because he would get frustrated when we tried to correct him and we were afraid that he would regress and stop talking to us.  It was also in part that we were just so thrilled that he was talking at all that we didn't want to put any negativity on his speaking. 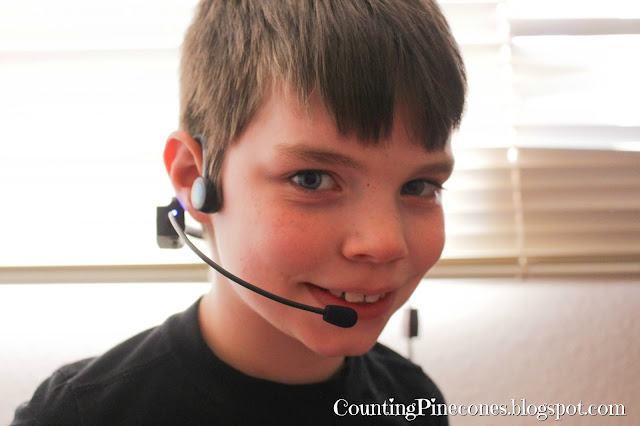 With the introduction of Forbrain to our learning, I started to change that.  As Garrett would pronounce words incorrectly (example - pronouncing "the" as "duh" instead of as "th-uh" ), I would gently correct him and have him repeat the word properly and have him listen to himself as he did so.

Because Garrett suffers from Sensory Overload issues, we started him very slowly with wearing the unit.  The first week of using it, I was lucky if I got him to wear it for 5 minutes total before he was ripping it off.  For those early sessions, I would just get him to converse with me.  As time went on, Garrett was able to wear the unit for longer periods of time.

I used Forbrain for various different lessons with Garrett.  First was with his poetry memorization.  I noticed that by wearing Forbrain while he recited his poetry, it made him slow down and actually think about the way he was saying things.  In the following video, you can even see as he looks down to listen to the feedback he's receiving as he's hearing himself.


The biggest difference I noticed is how he enunciates his words while using the Forbrain unit. Words are becoming understandable and do not all run together to make one large word.   In the video above, you'll notice in the first reciting of "Oooey Gooey", Garrett tends to run words together, most noticeably  in the phrase "the train he did not see" - it comes out as "trainnotsee".   In the second half, these words are properly broken up and pronounced correctly. Other noticeable differences are the pronunciation of the word "tracks" and "was" (in the first part he pronounces it like "wath").  His enunciation has improved greatly and we are finding that he not only in his school work but also in his everyday communications, we can understand him so much easier that we could a month ago.


However, one of the biggest improvements I have noticed has been in his reading.   As mentioned, Garrett is behind in his reading skills compared to other 2nd Graders - it's kind of hard to read aloud when you don't speak.  Much of the last two years have been playing "catch up" with other children his own age (he will be 10 in October).  Using the Forbrain while having him read aloud has really helped with Garrett making a connection between how words flow and how various letters sound when placed together.  The confidence with his reading that he has achieved in the past 6 weeks is amazing and he's like a completely new kid. 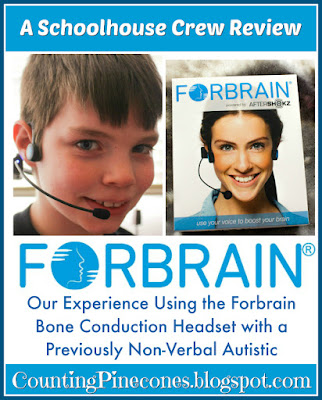 While the main focus of our review was working with Garrett, Ashleigh has also been using the Forbrain device while working on her Latin schoolwork to help with her memorization.  She has quickly been able to master the pronunciation as well as memorize the meaning of the various words she has been working on and I expect that the Forbrain will be a useful tool throughout the lessons.   I also expect my husband has plans on using it later as he starts working towards studying for his next Promotion Testing Cycle with the Air Force to see if it can help with his own memorization.

My family has been so blessed with the Forbrain unit and I am sure that at a later date, as Garrett has had even more time to use it with his reading and speaking, I will revisit this review and update on his progress.


For more information about Forbrain – Sound For Life Ltd  or the Forbrain Headset Unit be sure to visit them at any of their social media sites.