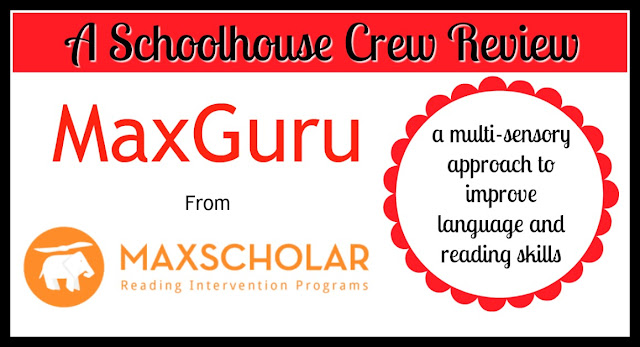 This is going to be a hard review for me to write.  You see, any time I go into a review, even if it's something that doesn't work for my family, I try my best to present the item in a light so that a family who might benefit can get a feel if it is appropriate for them.  I went into my review of MaxGuru which is part of the MaxScholar Reading Intervention Programs  from MaxScholar hoping that it would be a program that would help my struggling reader.  However, I quickly realized that this program would not work for us at all. However, I found so much questionable content in this program that I could not in good conscience continue to use it with my children.

MaxScholar is a comprehensive reading and language program designed to us a multi-sensory approach to improve language and reading skills.  MaxScholar claims to use the Orton-Gillinham method of learning as well as the Lindamood Phoneme Sequencing Method.  The MaxGuru is a combination of various MaxScholar products:  MaxReading, MaxPhonics, MaxWords, MaxMusic, MaxVocab, MaxPlaces, and MaxBios.

Fresh out of the gate, we struggled with MaxGuru. The first section we tried was MaxReading.  We never could find the proper placement for both Ashleigh and Garrett for them to use this program properly.  Even after MaxScholar offered us a placement test and we purposely answered all questions wrong, it placed my struggling reader at a Level 9 (which was high school reading).  We then somehow managed to get them put into a Level 0 (I'm not sure how)  but that was probably a Pre-K -Kindergarten level which consisted of looking at pictures and answering questions.   We never were able to get the kids into a reading level that was appropriate for them.

However, we figured that there were 7 different sections to this program, we would just try something else.  So we moved to MaxPlaces figuring that the kids would find those interesting. While the reading level was more appropriate for the kids, we were extremely disappointed to read the articles for the various places. They honestly seemed as if they were written by a 4th grader who had no knowledge whatsoever about the place they were writing about.  When discussing the city of Austin, Texas, there were sentences like "They built homes", "You can swim.", "There are animals.", "There are plants.", "You can buy food" and "The food is good."  None of this really teaches the kids anything about the city of Austin as all of these statements are true about any city in the world.  Also, because the writing is so poor, it's very confusing.  For example, the first paragraph says "It is in teh center of Texas, which is a state in the United States. Austin is the capital."  The capital of what??  While I know it's the capital of Texas, the writing is confusing and vague and leave one wondering if Austin is the capital of the United States.

And as a Texan myself, I'm still trying to figure out what Desert is in the Hill Country. 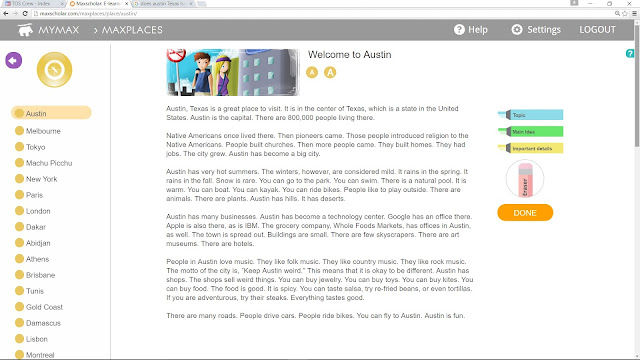 The main focus of the paragraph was that the kids were suppose to use the highlighters to the right to highlight the topic one color, the main idea another, and important information a third color.  The highlighters never seemed to work properly for us and the kids would get frustrated when they made mistakes as the eraser seemed to only work occasionally.   The kids did not enjoy these exercised at all, so we decided again to try something else.

We decided to try MaxMusic as I felt that maybe since the kids like music, they would like this portion of the program.  It was this section of the program that made up my mind that I would no longer try to use this program with my kids. 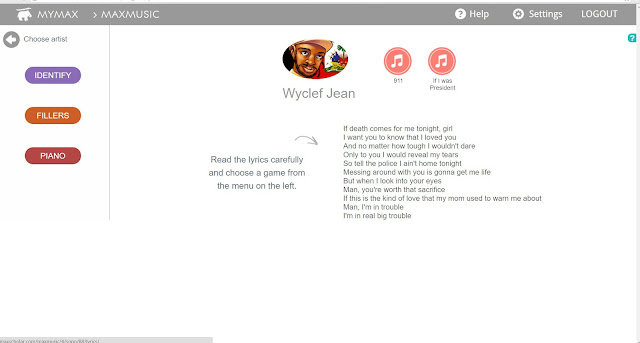 The above reading is lyrics from the song 911 from Wyclef Jean.  The lyrics speak of how the relationship between the two people will get the guy into trouble with the police - which I interpret to be about statutory rape, which I find highly offensive. Even if the song has any other meaning, the fact that the lyrics are questionable and discuss illegal activity ISN'T what I believe a young child should be reading about, regardless. Other artists featured on the MaxMusic section of Miley Cyrus, Wiz Khalifa, The Rolling Stones, Lil Wayne, Taylor Swift, Rhianna and Jay Z, none of which I personally feel hold any educational value for my children.

At this point, I decided to finish looking over this program without the kids, as I felt it just wasn't appropriate for them.  This time, I decided to look at the MaxBios section. MaxBios claims that students will learn about important and influential people who made a difference.  I was expecting to see names like Florence Nightingale, Amelia Earhart, Marie Curie, Ronald Reagan, John F Kennedy, Winston Churchill and Margaret Thatcher.  None of these were listed.  I was happy to see some important historial figures such as Rosa Parks, Barack Obama, Ghandi, Mother Teresa and Helen Keller.  However  I am still scratching my head what exactly people such as Biggie Smalls, Kid Cudi, Outkast, Tupac, Caesar Millan, Tyra Banks, Miley Cyrus, Pitbull, Kelly Clarkson and Justin Beiber have done to contribute to society to be considered "important and influential people who made a difference".  Again, these are people I would not necessarily want to include in my children's education.

I've given up on MaxGuru. There's just too much questionable content for me to feel comfortable with my kids using this, which is unfortunate as I felt that the idea itself was pretty good.  I'm not sure who the target audience MaxScholar is aiming for is, but it's not a typical homeschool family with Christian values.  I would almost say this program would be aimed at a more urban community as the song lyrics and celebrities are very very heavy on hip hop/rap artists.  Maybe by using these artists, MaxScholar hopes to reach and educate those students by using music and artists they can relate to. However, as the price of this program is quite expensive, I cannot see schools or families in these areas budgeting enough to include this program with their curriculum.