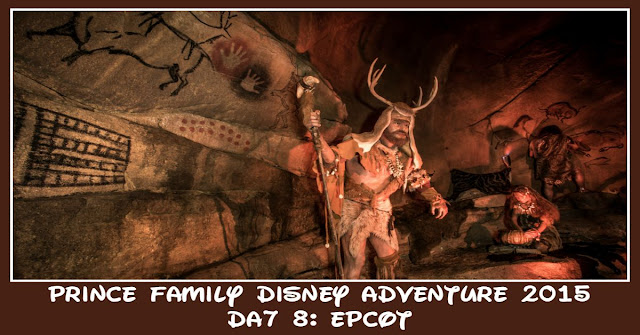 It's Day 8 of our Disney Trip and we're very sad to see it come to a close.  Last night, Charles gathered all of our clothes and washed everything at the Laundry Room near our room and we spent a good portion of the night, once the kids were asleep, packing up so that we could quickly pack our car and leave our "home" for the past 7 nights.   We all decided we will definitely be back as we really enjoyed staying at the Port Orleans Riverside but regretted that we didn't get to explore the resort more than we did.

After feeding Morla and informing Best Friends that we would be in later in the evening to pick her up, we headed back to Epcot for a few hours.

Immediately upon entering, we saw Pluto out taking pictures.  Both other times we entered Epcot, Pluto was in the same place and both times Ashleigh asked if she could go see Pluto. Unfortunately, with the other times, we were rushing to get to one place or another so we had to tell her no, not this time.. Well, as soon as she saw Pluto, she asked again. Knowing there wouldn't be another opportunity, we headed over and allowed the kids to visit with Pluto.   I'm so glad we did, because not only did it make both Ash and Garrett's day, but it turned out being one of my favorite pictures from this trip.

Originally we had thought we would head over to Morocco to have lunch but someone said they wanted to have lunch again in the AC at the Electric Umbrella.  We grabbed more burgers and headed up stairs and sat in the same place we had on our second day at Epcot..   The fact that this was the end of our trip was again apparent when both kids didn't want to eat and nobody really felt like doing much.

With bellies somewhat filled (Ash refused to eat), we headed to our first Fast Pass of the day - Test Track..  Everyone had been looking forward to riding this and luckily we had a fast pass because this is one of those rides that almost always has a huge line. Even with the fast pass, we waited probably 15 minutes before we got to ride it.  Fortunately, there's some really neat computer screens where you can design a car and at the end of the ride they tell you how your particular design performed.  Ashleigh was riding with Daddy and Alyssa, Garrett and I were riding together, so Alyssa and Garrett designed our car.


Garrett and Alyssa's Finished Product  and Alyssa and Dad's Design

Everyone enjoyed this ride very much and Ash said she wanted to ride it again. Unfortunately, it had a good 90 minute wait for the standby ride so that wasn't in the cards for us but at least we got to ride it one time.

After you get off of Test Track, Chevy had a really nice display of concept cars as well as vehicles you can purchase.. (Go figure, a car lot in Disney World?).  There are also many static interactive displays.  Alyssa spent the first few minutes checking out the cars she felt she deserved - haha - and then they all had fun playing around with the various displays. 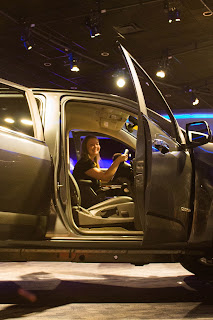 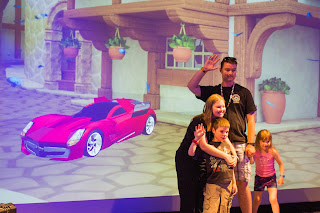 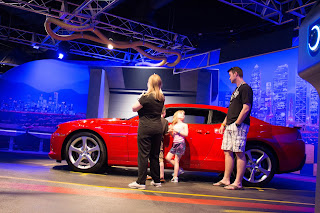 After everyone drooled over the nice cars and had a bit of fun, we headed over to see what the wait times for the standby line was (as said, it turned out to be 90 minutes) but to our shock, Mission Space's Orange line was only a 10 minute wait.  This is, without a doubt, Dad's favorite ride and we thought we were going to have to miss it (since we missed our Fast past on the previous day at Epcot) so we high tailed next door to hop in line. 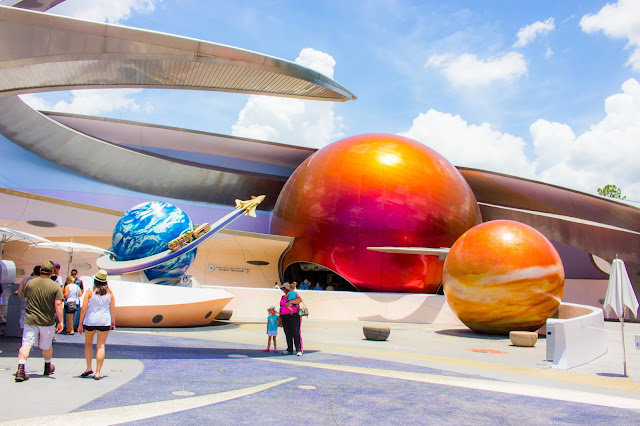 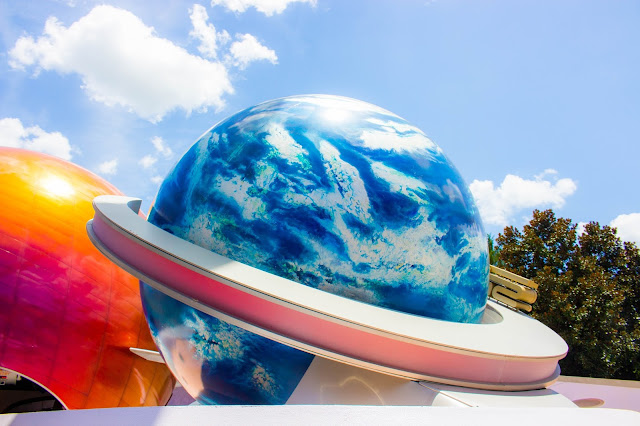 I was extremely worried as to how the kids were going to react to this particular ride.  There are two versions of this ride, the Orange Version which is pretty intense and then the Green Version which doesn't have the positive and negative G's.   We rode the Orange version, which Charles and I both love but because of the intensity of the ride, it is the ONLY ride in Disney World that actually supplies barf bags within arms reach.  Both kids rode it like a pro and they LOVED it!!!

Like Test Track, Mission Space has a lot of interactive static displays after you exit the ride.  One of these was a game in which two teams (or at least 8 people each) have to work together at a computer screen.  This struck Alyssa's fancy and she decided to give it a try. Her team had two people less then the other team but her team ended up winning. 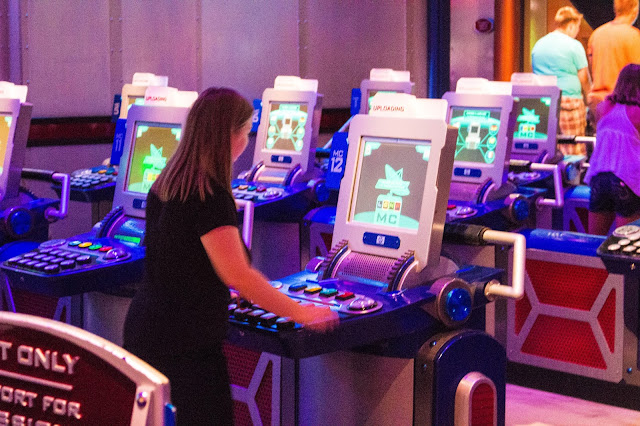 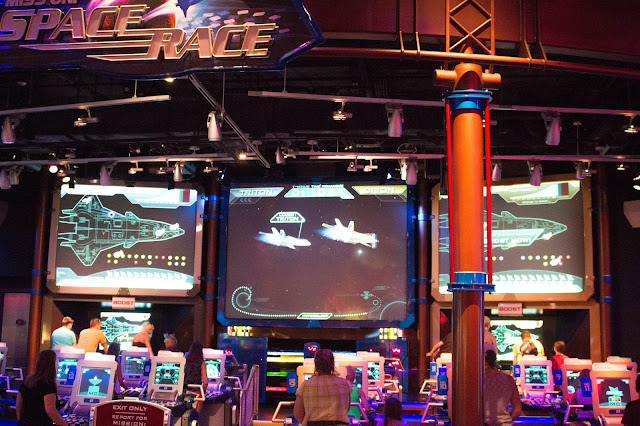 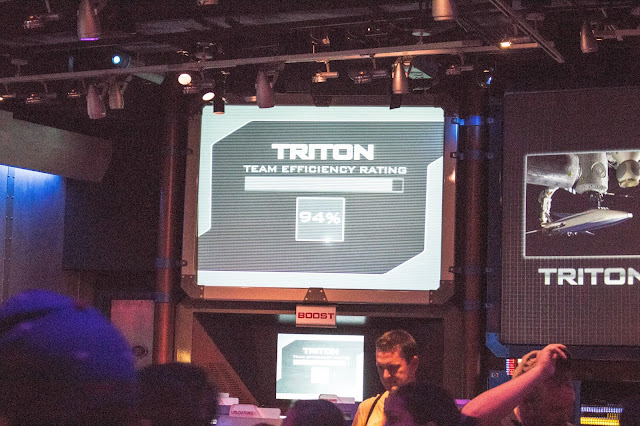 We had one final Fast Pass ready at this time.  Both Garrett and Ashleigh had requested that we ride Spaceship Earth one more time before we go and I was able to get us a Fast Pass for it. We headed back over to the big Golf Ball and hopped on for one last ride.

And of course, before we headed out of the park, we had to get one last picture of all of us together. 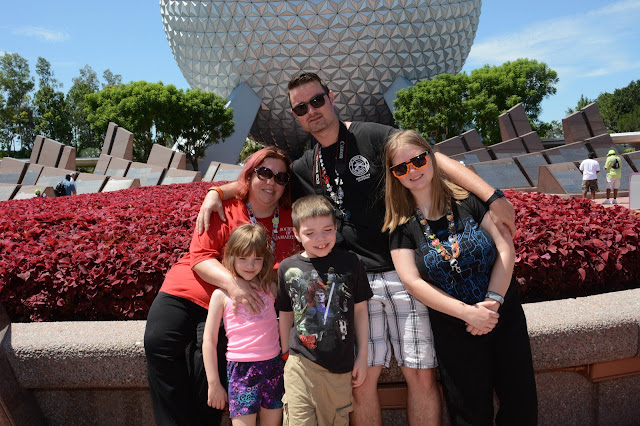 We were all starting to get hungry again and we had enough credits from our Dining plan to have a meal before we headed back West.  We decided to hit up Downtown Disney and do a bit of souvenir shopping as well as grab an early dinner at the Earl of Sandwich. This turned out to be the only dinner none of us enjoyed - the service was somewhat rude and the server had no idea what was going on with the dining plan (even though we were told they participate)..

After eating, swinging by the Lego store for Garrett, a toy store for Ashleigh and Once Upon a Christmas for me (I buy a Christmas ornament every time we got to Disney), it was time to say goodbye.  With heavy hearts we loaded up into the car and drove away from the Disney complex headed in back to California..  And wouldn't you know it?? It started raining!! LOL

Posted by Brenda Prince at 8:33 PM