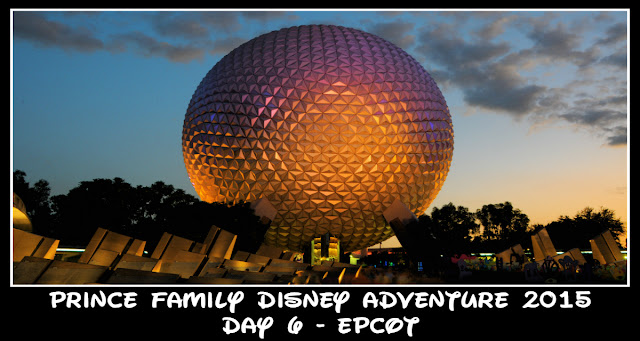 After staying out at the Magic Kingdom way later than we probably should have, we didn't bother setting up a wake up call and slept in.  This was slightly unfortunate for us since we had a 10am fast pass for Test Track that we ended up sleeping through and we ended up getting into Epcot right around 1pm.

We didn't bother eating breakfast in the hotel since we were already running late so first on our agenda was to find someplace to eat.  We were all starving.. So we headed over the the Electric Umbrella and grabbed burgers for everyone. (which of course I forgot to take pictures of.. lol).

Since our fast pass times were pretty much over, we headed over to the World Showcase to start checking out several of the countries.  Since we had already visited Canada on Tuesday, we skipped past it this time around and headed straight for the United Kingdom.  We got lucky that the UK entertainment was about to start, so we grabbed at patch of concrete and sat on the curb and listed to the "British Invasion" band play songs by the Beatles and The Who.


However, there was one woman having just a bit "too" much fun. I'm not sure if she was inebriated or what have you but she somehow forgot she wasn't at Woodstock and was instead at Disney World.. I got to hand it to her though, she danced the entire 15 minute set that the band played and never stopped.. I would have been winded after the first song.. LOL 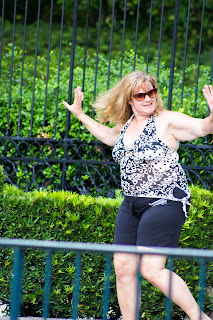 After checking out the UK we started over the Friendship bridge to the France Pavilion.  Ashleigh and Garrett immediately noticed the Eiffel Tower in the distance and knew we were heading to France and they began to discuss things pertaining to France that they had learned in our schooling.  An older woman walking behind us overheard the conversation and commented how much they knew for as young as they were.  I told her thank you, that we homeschool - to which she told me Great Job!!    That really made my day as a homeschooling mama :)

We decided to skip over Morocco for the moment, only because we're planning on having lunch there on the third Epcot day, so we instead headed over to the Japan Pavilion.  Alyssa had been looking forward to visiting this particular part of Epcot as she really wanted an authentic Kimono.  After doing some browsing, she found one she really liked that was within her price range.  She can wear it with the sash it came with for now but eventually I'll buy her an Obi and maybe a hair pin to wear with it.


Unfortunately, while in the process of shopping for her kimono, Alyssa's refillable mug got misplaced. Unfortunately, she didn't find it but while she went back and looked, the kids and I sat outside and enjoyed the pavilion.

It was getting close to time for our dinner reservations so we headed over to the Germany Pavilion. With it being our anniversary, I knew Dad would be happy to eat at the Biergarten as this was one of his favorite places on our honeymoon trip. We had a short 20 minute wait so we sat outside looking at the sights and sounds of Germany.


When our pager went off, we made our way back to the restaurant and we were seated at a table on the third tier.  We were at the table first but we were quickly joined by a couple with a teenage son that were from Boston. They proved to be very nice people and we had lots of conversation going on while we dined and enjoyed the entertainment.

After we were all completely stuffed like a Thanksgiving turkey, we hunted down a place to sit as we waited for the Illuminations fireworks to begin.  There was going to be a very special 4th of July fireworks after the standard Illuminations show, so we wanted really great seats for that.. Even with over an hour and a half to wait, most of the benches by the Lagoon were taken.   We resorted to just pulling up a piece of concrete and we had a great view of the sun going down over the World Showcase Lagoon. 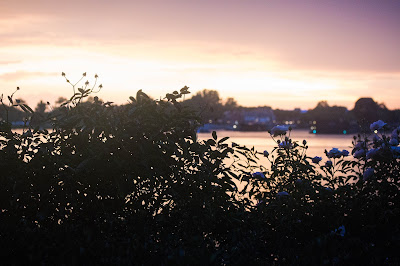 Guess what? Wouldn't you know it, it started to rain and lightening.  Noticing a pattern here? We got the camera wrapped up in plastic and just waited it out and crossing our fingers that it wouldn't be delayed.. And as luck would have it, it wasn't.  And it was well worth the getting a bit wet for.

When the fireworks were done, we knew it was time to head back to the hotel.. The kids were starting to get tired and my feet were killing me..  (Again, make sure you have good shoes!!).  So we hopped on the tram and headed to our car and made our way back to the hotel for the night.

Tomorrow we head back to the Magic Kingdom for the last time this trip.
Posted by Brenda Prince at 9:00 PM