With Lee In Virginia ( A Schoolhouse Crew Review) 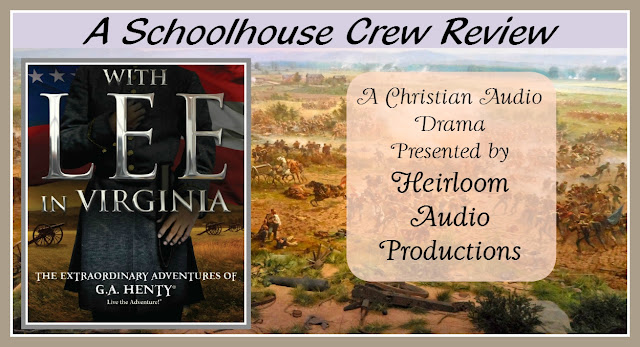 Stories by G.A. Henty are extremely popular with many homeschool families.  A masterful storyteller, Henty wrote amazing historical fiction that centered on main characters who displayed faith, loyalty, and good morals that students can relate to.  Heirloom Audio Productions has taken these amazing stories to an entirely new level with their "The Extraordinary Adventures of G.A. Henty" series of audio theater productions.  Heirloom Audio made a name for themselves with their release of "Under Drake's Flag", followed by "In Freedom's Cause". The third installment of this audio series, "With Lee in Virginia" once again falls into the level of audio masterpiece along with the first two.

I was given the opportunity to review the 2 CD performance of "With Lee In Virginia", the accompanying Study Guide as well as extras that included access to the MP3 download of the performance, an Ebook copy of "With Lee in Virginia" by G.A. Henty, the official soundtrack, a printable cast poster, a printable quote by Robert E. Lee and access to the newsletter website. 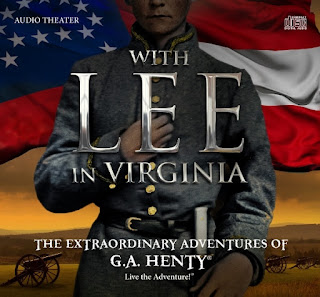 As with each of Heirloom's productions, this story starts out with an accidental meeting between the narrator and two young men on a train. This meeting leads into the main story as the narrator begins to tell these young men the story of Vincent, a young man much like them, who lives on a plantation in Virginia and owns several slaves, one of which is Dan.  Vincent feels obligated to join the Confederate forces at the start of the Civil War.  The story concentrates on Vincent who, through the story, experiences several losses, injuries, is captured by the Union Army and escapes thanks to Dan.

With so much attention on the Confederate Flag and what it represents in the news these days, I found this production a perfect lesson for the kids to understand that there was much more to the Civil War then about the mistreatment of slaves.  This production does a perfect job of showing the relationships between many slaves and their masters; that there many cases of respect and friendship between the two.  It also shows the flip side, the abusive owners, and how they were viewed by others around them in the community as well as how those who treated their slaves wrongly many times treated others around them poorly. The main focus of this recording, however, is Duty and Heirloom does a great job of showing that many who fought on either side of the war did so not because of slavery but instead because of a sense of duty. 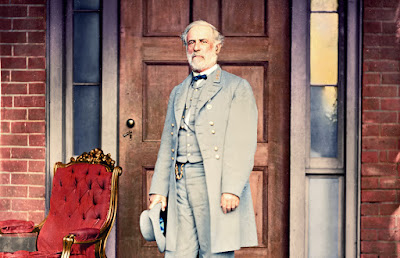 Heirloom audio pulls out a star studded cast for this audio adventure. Brian Blessed returned once again to narrate the story while Kirk Cameron and Sean Astin both lend their voices to the cast as well.   But even with such big names, I would have to say that Andre Soggliuzzo's performance as General Robert E. Lee is the show stopper this time around.  His performance of Lee really lets the listener get a feeling as to why Lee was so well respected, even by Ulysses S Grant. 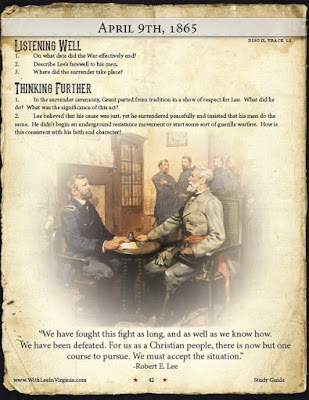 A 48 page downloadable study guide is also included with the purchase of the 2 CD audio set. Unlike previous study guides, Heirloom Audio made improvements to include on each page the track number in which the material is presented, making it much easier to follow along.  The full color guide includes beautiful photographs and artwork depicting the Civil War and the soldiers who fought on both sides as well as information about Henty, Robert E Lee, Stonewall Jackson.

Listening Well Questions provide the perfect opportunity to test listening comprehension and test what your child has heard and remembers.  All answers are easily found within the listed track.

Thinking Further Questions are also provided. These questions require a bit of research or deeper thinking beyond just what was heard.  These are great for older students as a platform for independent study on the various topics covered by the recording.


Defining Words provide a vocabulary list of words that were used in the recording that students might not be familiar with.  These words are easily found within a standard dictionary.

A two page Bible Study is also included in the Study Guide. Each page uses Bible verses to allow students to see what the Bible says in regards to Duty and Loving Thy Neighbor.

I highly recommend all of the Heirloom Audio Productions as they are entertaining and have such a high educational value. This is true also with this new production. "With Lee in Virginia" immerses the listener into the times of the Civil War and brings the characters (both real and fictional) to life and will capture your child's attention much more than a cut and dry documentary.

Posted by Brenda Prince at 5:31 PM