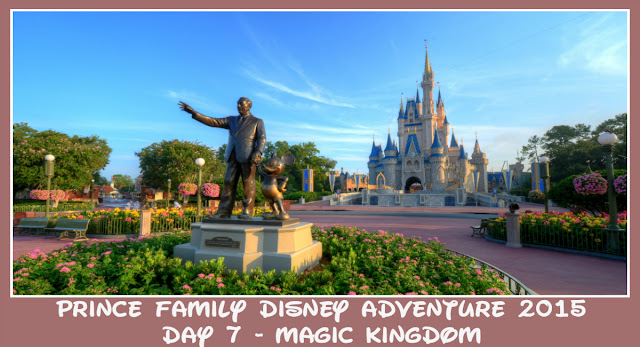 Day 7 is upon us and it's our final day in the Magic Kingdom Park.  It's really sad to see this part of our trip over with and done, it seems like it was just yesterday we were arriving and checking into our hotel and now we're one day away from leaving :(

We decided to sleep in a bit late again so we ended up arriving at the parking lot right around 1PM knowing we had a 1:45pm lunch reservation at Be Our Guest that we did not want to miss.  This is probably the most coveted reservation in the park at this moment (maybe second to Cinderella's Breakfast in the Castle) and we really got lucky getting it.  However, after parking and taking the tram to the Transportation Center, we were informed that the monorail that runs from the Center to the Magic Kingdom was not working. Our only way to get to the park would be to take the boat and cross the lake.  With little choice in the matter, we headed to the boat and luckily were able to board the boat currently docked.  It took about 20 minutes from boarding the boat, launching and crossing the lake before we made it to the Magic Kingdom.

Once actually inside the park, we knew our quickest way to get over to Fantasyland would be to hop on board the train again and take it over to the Fantasyland Station.   We knew we were going to be late regardless and just hoped that once we got there, the people working at the check in would understand that the monorail was down.

We finally reached Be Our Guest right at 2pm and checked in. No questions were asked and we were send directly into the restaurant without any problems.

This restaurant is absolutely beautiful inside.  The details both make you feel like you are entering a 1700 era French Castle as well as stepping into the Beauty and the Beast story.. 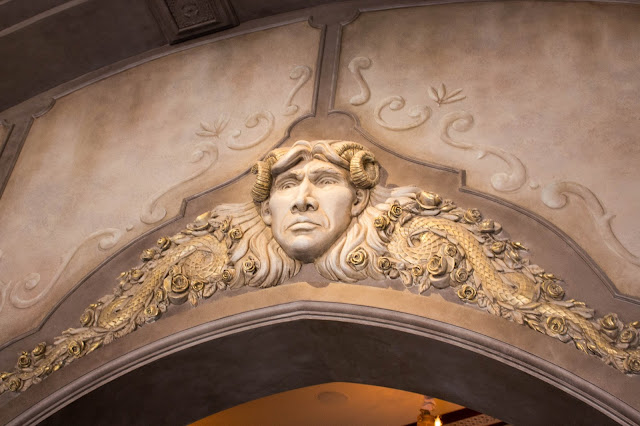 While the line wasn't long, the Suits of Armor kept the kids entertained. They talk among themselves, sometimes sing, times sneeze.. They were very entertaining and the kids liked them.

Ordering food during lunch is a unique process compared to other quick service meals.  You walk up to a computer screen and make your selections and then you just go find a table in one of the three dining rooms (The Ballroom, The Rose Room or the West Wing).. Once seated, the servers are able to track your table via your Magic Bands  or if you do not have a Magic Band you are given a plastic rose that does the same thing.  When your food is ready, they bring it to you on the old French serving carts with real china and silverware.. Drinks are refillable at drink stations and they also serve coffee and teas if you would like.

We opted to go and sit in the West Wing and managed to score a round table directing in front of the balcony that had the Enchanted Rose and the Magic Mirror that Beast gives to Belle.  There is also the ripped portrait of Prince Adam (Beast's real name) hanging in this room.  Every 15 minutes, one of the petals of the Enchanted Rose falls from the flower and lightening strikes and for a brief moment you can see the picture of the Prince switch to a portrait of Beast.   There are curtains hanging throughout the room and they are all tattered from where Beast has destroyed them.  We were thrilled to find a place to sit in this room as it is probably the smallest of the three dining rooms.  Within about 10 minutes of placing our order and finding a seat, our server pulled up with our food and it was time to eat.

Alyssa and I both opted for the Slow Cooked Braised Pork with mashed potatoes and green beans.. Charles and the kids opted for the Croquet Monsieur sandwich with fries.  All of us ended up getting the Master's cupcake so that we could try the Grey Stuff as we heard it was Delicious (don't believe it? Ask the Dishes).. 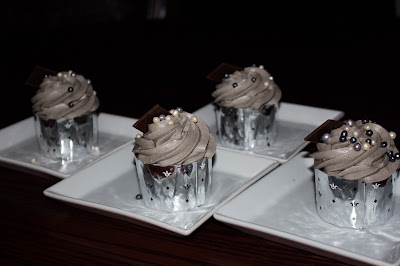 Alyssa and I both agreed that the pork was absolutely to die for. Very moist and tender and the gravy was perfect.  The green beans were a bit bland for my taste and I don't think Alyssa cared for them much either..  Charles said his sandwich was really good as well.. The Cupcakes??? Well, lets just say that the Dishes don't lie.. They were really really good.  Foodwise, this quickly became one of our new Favorites and will be on the "Must Do" list for future trips.


With very full tummies, it broke our hearts to leave Be Our Guest but we had a 3pm Fast Pass to allow Ash and Garrett to go see both Rapunzel and Cinderella.  Garrett loves Rapunzel so this was a fast pass made with him in mind..


Once the Princesses were met, we headed over to once again catch a showing of Philharmagic but on the way we decided to try our hands at pulling the Sword from the Stone..  It didn't budge.. Oh well, they might not be the future King of England but they are still Princes ;)


At 4:50 we had Fast Passes to meet Mickey Mouse over at the Town Square Theater..  This is a very different Mickey Mouse meet as this particular Mickey talks.. I kinda wish I had gone for the regular Mickey meet and greet but I thought this one would be neat.. It kinda freaked Charles out as he wasn't expecting this one to talk.. LOL  Also, this Mickey doesn't really pose with the kids, just kind of plays with them.. *shrugs* 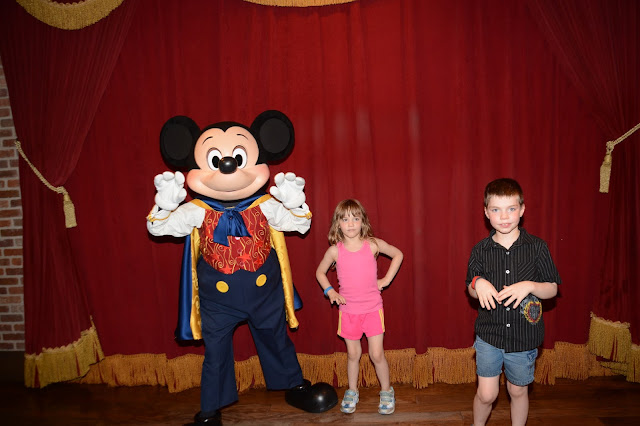 Right next door to Mickey was a meet Tinkerbell so the kids went inside to go meet her..  Dad and Mom sat in the rocking chairs on the front porch of the Town Hall and just people watched while they went through the line. 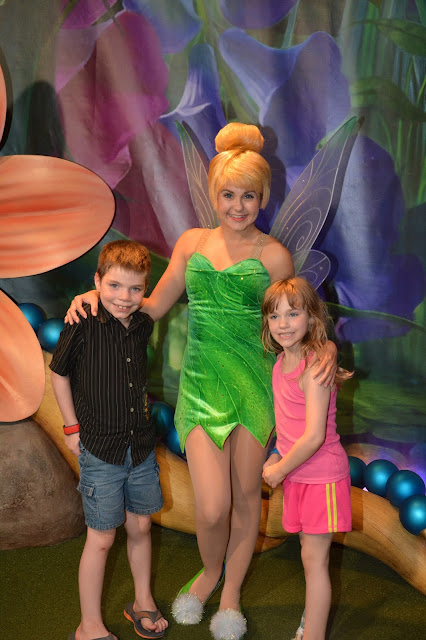 Of course, by the time the kids came back, it started raining.   We headed inside town hall for about an hour hoping that the rain would stop as we didn't wander too far as we had dinner reservations at 720 nearby.   We tried to hop on the train to give us something to do but just as we got seated (after waiting in the rain) they told us that the train was going to stop running for a bit so we headed back to find someplace dry until our dinner reservation.

Dinner Ressies were at the Crystal Palace.  The Crystal Palace has alright food but most people go for the characters because it features Pooh, Piglet, Tigger and Eeyore .  However, unfortunately for us, my camera wasn't happy that I hadn't changed out the battery and decided to go on strike, so I wasn't able to get any pictures of the kids with the Characters..

To end our day, we had a final fast pass for Enchanted Tales with Belle.  We headed over there and Charles, Ashleigh and Garrett each got picked to play a part in the retelling of "Beauty and the Beast".. Charles was a suit of armor, Ashleigh was Philippe the Horse and Garrett was an enchanted picture frame.. LOL 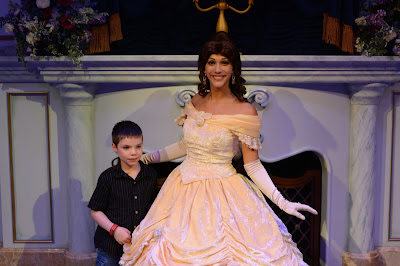 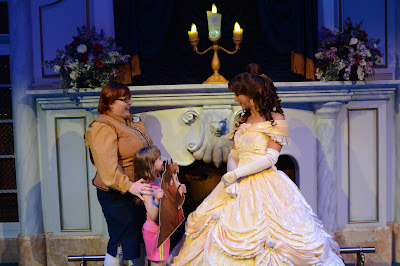 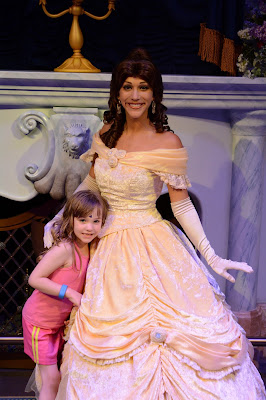 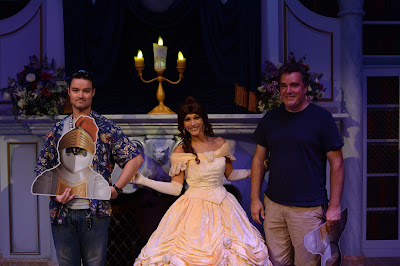 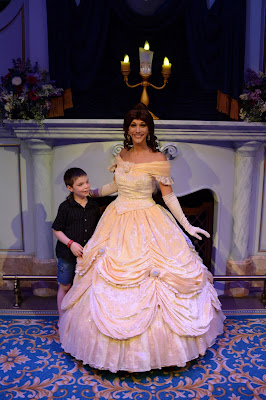 It was still raining at this point and Ashleigh had to use the restroom (and refused to use any restroom other than our hotel because they all had automated flushers) so we headed back to the monorail (which was working again) and then headed back to our hotel.. Once again, the kids crashed as soon as their heads touched the pillow and our final day at the Magic Kingdom was officially over..

Tomorrow is our final day at Epcot..
Posted by Brenda Prince at 8:38 PM