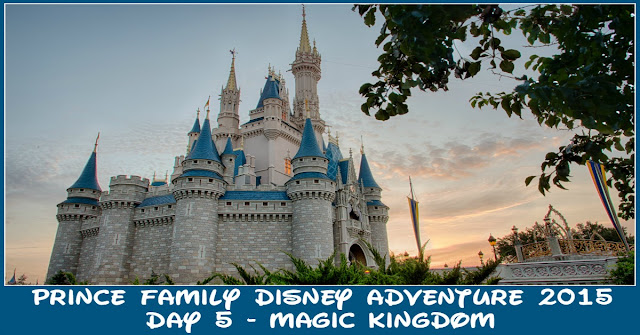 It’s our halfway point in our trip and we decided to revisit the Magic Kingdom today and catch up on many of the rides we missed on the first day.  Tonight is the Magic Hours night for the park so the Magic Kingdom doesn’t close until 3am. It’s also the 1st night of the Fourth of July fireworks so we wanted to see those since we had the opportunity to see these tonight and then see the Epcot’s 4th of July fireworks tomorrow.

The first thing on our agenda was to head out of the park complexes to the closest Wal-mart (which, if you need to know, is about 4 miles up the road from Downtown Disney). I had already suffered 4 days with wet croc sandals and I just couldn’t do it anymore. I lucked out and got not one but two pairs of shoes for 20 bucks that turned out to be much more comfortable then the ones I currently had.  One thing I cannot stress enough is the need for good shoes when you go to Disney, as you’re going to be walking a lot.  I had researched the best sandals to wear in the park and Croc sandals were highly recommended. While they were comfortable when they were dry, in the rain they become devices of torture and at this point my blisters had blisters that had blisters.

Coming back from Wal-mart we passed through the entrance of the park.  The kids hadn’t seen this when we first arrived because we came into the parks the back way. 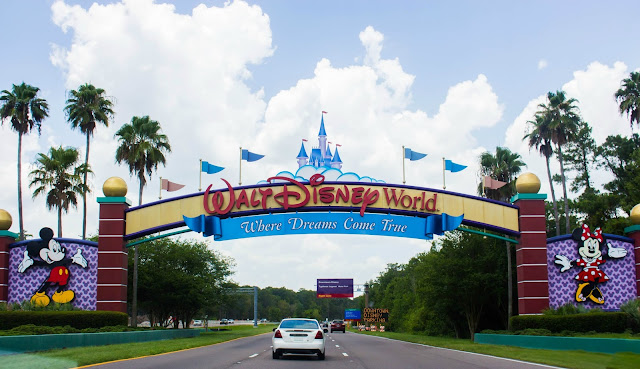 As soon as we entered the park we headed up the ramp for the Walt Disney World Trains.  Walt Disney was a lover of trains and he had acquired and restored two steam engines which are named .  Charles really enjoys the trains and really wanted to share this with Garrett who enjoyed it just as much. 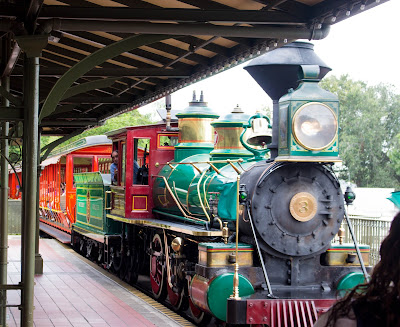 We rode the train to the Fantasyland station to look around before we headed over to the first Fast Pass of the day – the Seven Dwarf’s Mine Train.


Since we were already in Fantasyland and had about an hour before our fastpass time, we decided to grab a quick snack at Pinnochio's Village Haus and burn up some of our snack credits. Mom was good and got a small Caesar's salad to hold her over until our early dinner reservations, Dad and the kids either got chocolate cake or chocolate gelato.
While we were there, the kids got asked to join one of the cast members to color pictures of Jiminy Cricket and we got to go over and sign the Blue Fairy's book of wishes. 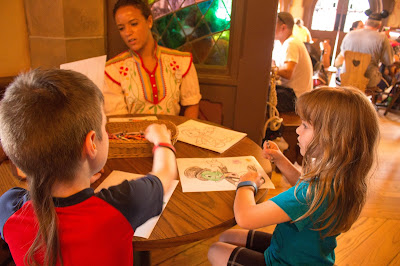 We still had a small bit of time before we had to be at the Mine Train and we noticed that the Carousel had a relatively short line so all of us hoped on for a quick ride. 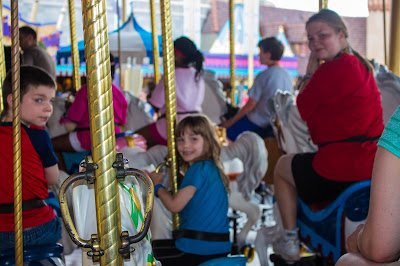 This was a new ride for all of us so we didn’t know what to expect.  This turned out to be one of the favorites for the kids, especially Ashleigh who wanted to ride it over and over again.  Alyssa thought it was rather too short and I agree but it was still a fun ride and was glad to see the kids really enjoyed it.

Our next Fast Pass was timed for right after the mine train and was nearby so we headed over the Ariel’s Grotto for the kids to meet “Mermaid Ariel”..  The girl playing Ariel was great and Ashleigh and Garrett enjoyed talking to her about how pretty her hair was (which she said it was because she uses the Dinglehopper) and touching her tail.  I didn’t know if Garrett would care much about the Princesses but the smile on his face made it apparent that he was having a blast.  Even Dad and Alyssa got in on the Princess action.


One thing I will say about the face characters who talk and interact with kids is that they are on the ball for anything that comes their way. Garrett’s brain doesn’t work like other children and so the things he wants to talk to them about is completely different from what other kids would say when meeting them. For this trip, Garrett wanted to tell everyone he met that he had seen a round spider web (he’s fascinated with webs) and thankfully each character responded kindly to his lil quirk.

Also, since I’m on the subject (and I may end up writing a special post about this topic later), please, do not allow you’re kids special needs to keep you from planning a trip to Disney World. We were worried and apprehensive about taking Garrett to a major theme park in the middle of summer while the crowds are at their highest. Garrett has absolutely no concept of situational awareness of what is around him and this often causes problems for him.  Disney does offer a Guest Assistance Card (GAC) which is available for special needs children who have issues with waiting in long lines, ect.  However, this proved unnecessary for us as Garrett did a great job holding our hands and just enjoying the sights and sounds around us, none of which proved to be too overwhelming for him.  Disney really is a Magical place for children of all types… 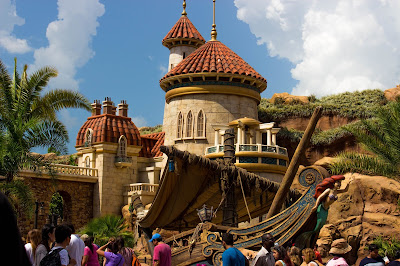 After everyone got to see Ariel we had about an hour until our next fast pass for Ariel’s Under the Sea Adventure. However, the standby line only had a 20 minute wait so we decided to hop in line instead of waiting for our fast pass time.  Disney makes it really easy to change or make fast pass choices from your phone while in the park (Which offers free WiFi to keep you from using your Data Plan) so while we waited in line I changed our fast pass to It’s a Small World which at that time had a 90 minute wait in the hot Florida sun and so as soon as we rode Under the Sea we headed over to use that fast pass.

On the way, we met up with a new friend: 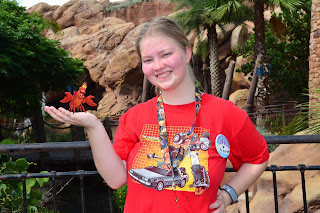 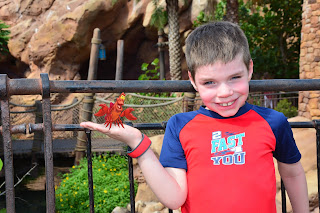 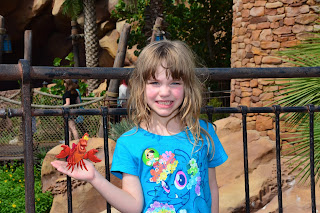 It’s a Small World is really cute but annoying as all heck.  This is a ride that would be so much better if they gave you a basket of softballs to throw at the puppets while you travel through.  The ride takes about 10 minutes from start to finish and the entire time they are singing “It’s a small world” in a high sing song voice in various languages.  By the end of it, you’re ready to hop out of the boat and swim for it just to escape. But, it’s something you need to ride at least 1 time in any Disney trip, especially if you have kids as they will really enjoy it.  Just bring an Ipod or some other music player, pop some headphones in your ears, crank up the sound and you’ll be good :) 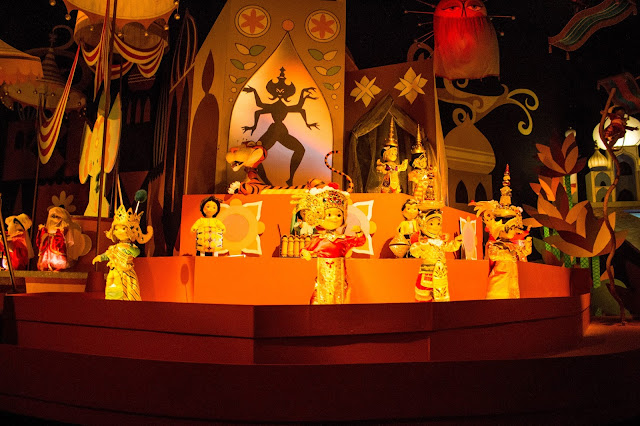 By this time the heat was getting to us so we headed over to Disney’s Philharmagic. This is a really cute 14 minute 3D show which is a GREAT place to cool off.  The theater for it is extremely large so it sucks up a lot of people at one time making any wait time almost zlich. It’s cool and dark in the theater and several of the special effects involve fans blowing on you so if you’re hot and sweaty, this is the place to go to cool off quickly.  (Philharmagic turned out to be our sanctuary from the high temperatures several times on our Magic Kingdom days). It’s a really cute show and includes many Disney Characters such as Simba, Ariel, Mickey, Donald, Peter Pan, Aladdin and Jasmine).

Before heading out of the park for dinner, we decided to hit up the Country Bear Jamboree.  This is one of the original rides at Disney World and while it shows its age, it's still cute.. I love the bear that sings "Blood on the Saddle".. LOL 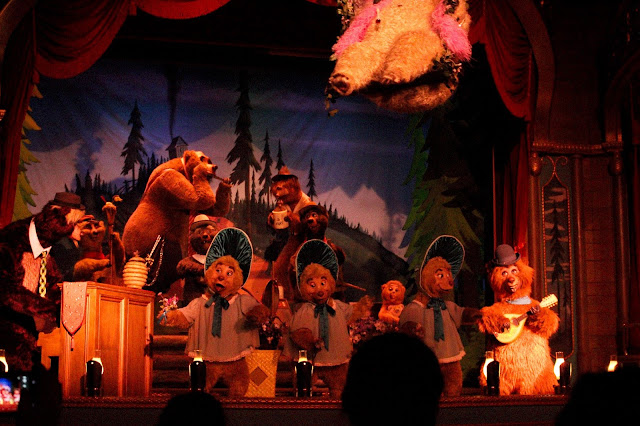 We had an early dinner reservation at O’hana’s over at the Polynesian resort so we headed out of the park and hopped on the resort monorail to go eat.  The Poly is a really beautiful resort, although somewhat dated compared to the other Deluxe resorts. I like it though. 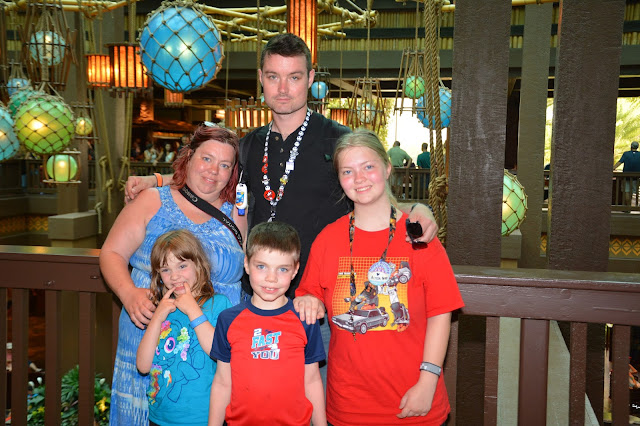 O’hana’s is one of the restaurants we have to eat at.  The food is absolutely wonderful although both times we have eaten there the service was lacking.  This time around the waitress only brought meat skewers around one time and never really checked to see if we were interested in anything more before bringing desert.  However, the meat we did receive was just as wonderful as we remembered.. I absolutely love the jumbo shrimp. Everyone ate their fill except for Ashleigh who decided she didn’t want to eat any of it and we ended up getting our server to bring her a peanut butter and jelly uncrustable instead.  Garrett got serenaded by the Luau singer (who wasn't that good in our opinion) and everyone got Lei'ed. 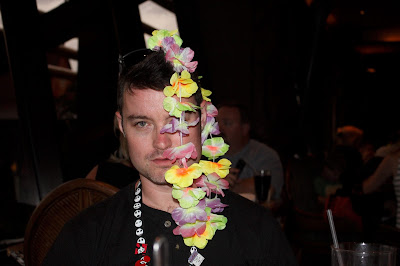 It was still raining when we finished our meal and headed back towards the park. We decided to stay on the Monorail and ride it two complete circuits in the hopes the rain would taper off. While it did slow down, it never stopped completely and lightning was streaking across the sky.


We finally made it back to the Magic Kingdom and waited about 2 hours in hopes that the 4th of July fireworks would not be cancelled.  While they were delayed significantly, they The delay was made much more bearable with the fact that we met a grandmother and her granddaughter who was close to Ashleigh in age (who’s name happened to be Ashlynn) who was hiding form the rain at the same place we were. The kids kept each other entertained and eventually it stopped raining so we could watch the fireworks and they were wonderful. The castle also looked really wonderful decked out in Stars for the 4th. 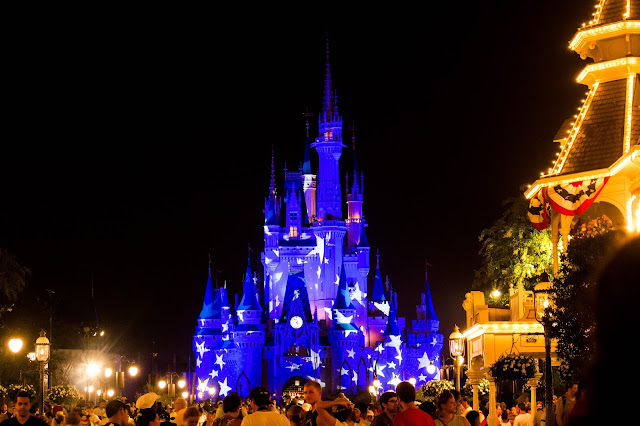 We watched the Electromagic Parade before heading to Tomorrowland.  Since it was Extra Magic Hours and the park closed late, this gave us the opportunity to ride many of the rides with little to no wait.  First, Charles and Alyssa headed over to Space Mountain to ride it.  Ash and Garrett could have rode it as well but I decided this wasn’t a good idea as you have to sit alone and it’s in the dark – I figured both would be terrified. 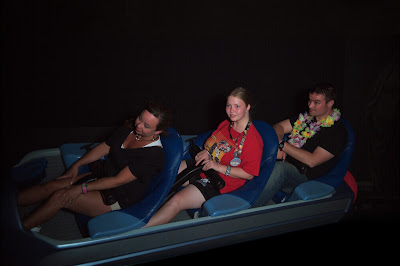 Once Alyssa and Charles came back, we headed over and jumped onto the People Mover. The kids liked this as they could watch all the lights of the park at a slow speed.

There was almost no wait for Buzz Lightyear’s Space Ranger Spin so we basically walked right onto it.  The kids LOVED this and everyone tried their best to get the high score.. Once again, Charles got the highest score out of all of us (although I wasn’t that far behind). 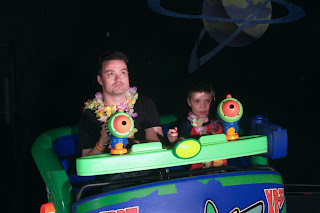 About this time we decided it was time to maybe start heading out of the park.. However, on our way out we passed the Mad Hatter’s Tea Party (spinning tea cups) and the Winnie the Pooh ride which both had only had a short wait. Ash enjoyed the tea cups the first time we rode it so she asked if we could ride it again – sure, why not!  and we figured we might as well knock out the Pooh ride while we were at it before we finally exited the park and headed back to the hotel.

Once there, the kids crashed almost as soon as they touched the beds and hopefully had sweet dreams of all the excitement of the day.