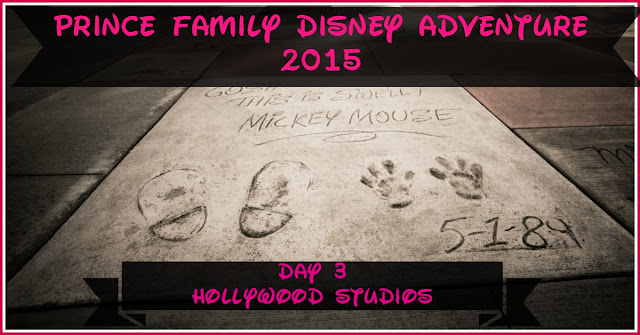 Today was our Hollywood Studios day and we were so looking forward to it because of the Fantasmic show and Frozen Fireworks they have at night. Unfortunately, neither of these were in the cards for us today as there was a huge thunderstorm that released a downpour on us shortly before they were scheduled to begin which caused them to be cancelled. Regardless, we still had a good time. 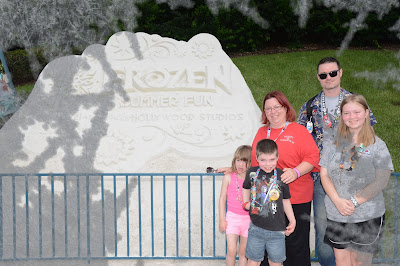 We got to the park a bit later then we wanted as it took us all a while to get in gear for the day.  Once we got to the park, we made our way to Toy Story Mania for our fast pass.  So far this has been Ashleigh's favorite thing.  Ashleigh and Garrett both scored 12K, Mom scored 63K, Alyssa got 112K and Dad got the high score for the hour with 153,700.  It was lots of fun.. :)

Since we were already in the general area, we went ahead and grabbed lunch at Pizza Planet..  5 Pepperoni pizzas, salads and cupcakes and a small downpour later and we were ready to get going once again.. 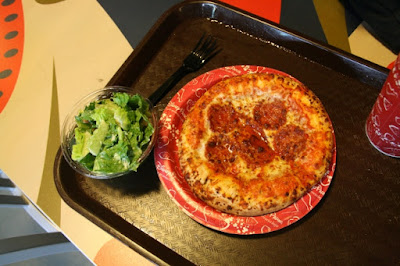 Next we headed over and checked out the Muppets 3D.  Anything with the Swedish Chef is okay in my book, plus it gave me a nice opportunity to cool off and rest.  Ash and Garrett luckily like the 3D shows, as Alyssa was scared of them when she came last time.  We're not a huge muppet family (other than the Swedish Chef who cracks me up) but it was a cute show and we liked it.

A new addition to the Hollywood Studios is Mr Gold's store.  If you're a fan of the tv show Once Upon A Time on ABC then you’ll be familiar with this lil shop. You can’t go inside and it’s so far back in the Studios that you can easily miss it but there’s all sorts of goodies to be seen through the store windows..  We spent a good 20 minutes looking at everything, trying to remember what some of it was (We’re big fans of the show) and taking pictures.. 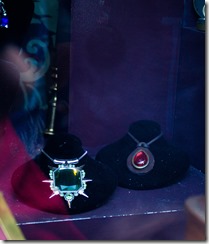 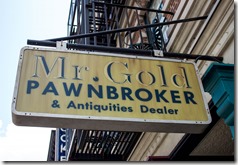 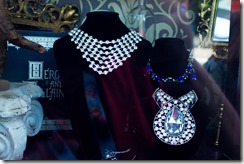 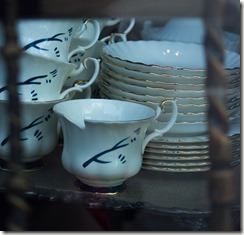 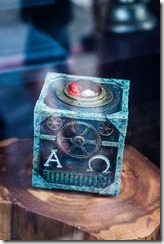 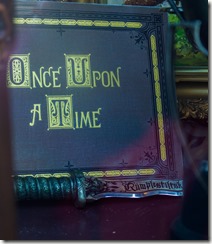 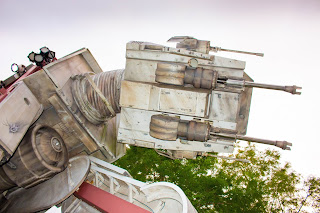 Next up on the list was riding Star Tours..  This was really fun as the scenario we got (there are multiple ones) was that we had a rebel spy on our flight who we needed to take to safety.. There are 54 possible combinations to this ride.. Ours went like this: An Imperial probe droid attaches to the Hoth amid a battle between Rebels and Imperial AT-ATs. After entering the combat zone against orders, an AT-AT fires at the Starspeeder, and the ship crashes in the snow, teetering on the edge of a cliff. The ship falls over the side and rides the canyon like a luge, launching off another cliff and free-falling into a deep canyon. Seemingly at the last second, R2-D2 re-engages the engines and the Starspeeder rockets back into space. At this point Princess Leia sends us a holographic transmission confirming that there is a rebel spy on board, and says that coordinates have been sent to R2-D2. (The Spy turned out to be a girl sitting right next to Alyssa).  Finally the Starspeeder makes it to Naboo, which is under attack by the last Trade Federation armies. Three N-1 starfighters are ordered to lead the Starspeeder into a hangar bay, but are shot down by vulture droids. Another vulture droid shoots down the Starspeeder, and it plummets into the ocean of the planet and arrives near Otoh Gunga (almost hitting Jar Jar Binks). After the Gungans order the Starspeeder to follow a ship that will lead it through the planet's core a giant carnivorous fish attacks the guide, but not before being eaten by a bigger sea creature. An even bigger sea creature then tries to eat the Starspeeder, but R2-D2 blasts it with an electric shock. The Starspeeder then surfaces, skipping off the water and into a repair hangar filled with 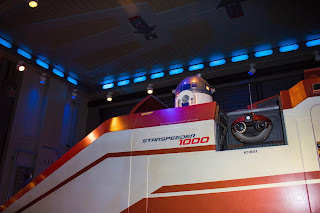 windshield and detects the presence of the Rebel spy on board the Starspeeder. After a fast escape and jumping to light speed the Starspeeder almost crashes on
Starfighter debris. (There is a short reference to the original Star Tours Ride. C-3PO shouts: "Brakes, brakes, where are the brakes?" just like Captain Rex in the original attraction) The Starspeeder smashes into the tail of a Naboo starfighter, shattering the windshield and angering the pit droid that falls into the cockpit.

By now it was time for our dinner reservations at Whispering Canyon Cafe.. This place is sooooooo much fun.  Our waiter (who was from England) was great and really interacted with us.. Alyssa, Dad and I all got the BBQ skillet, Ashleigh got the grilled cheese dipper and Garrett got the grilled chicken.. Of course, Garrett wanted ketchup with his chicken.. There is no ketchup on the tables, when you ask for it, the waiter has everyone at the table yell really loud “We need ketchup”..This is what happened:

We ended up with over 28 bottles of ketchup on our table.. Charles calculated that there was over 3 gallons of ketchup on our table. (Which our waiter proceeded to tell him that he had WAAAAYYY to much time on his hands).. Garrett thought the whole thing was funny and every time someone yelled for ketchup, he would crack up laughing.   We had such a great time. The kids got to participate in hobby horse racing and then they even sang happy birthday to Alyssa (who had to do the cha-cha at every break).


After dinner we headed back to the park.  The kids were ready to ride “The Scary Elevator” – The Tower of Terror. The kids were a bit hesitant about riding this and I can’t really blame them.. But sure enough, they got on it and they rode it like troopers.. Ashleigh kinda liked it and said she would ride it again, Garrett said he had rode it and that was enough for him.

Unfortunately, by the time we excited the Tower of Terror, the rain was pouring down like crazy with massive lightning. Because of this, both the Frozen fireworks as well as both showings  of Fantasmic were cancelled.  So we headed back to the hotel and called it a night.