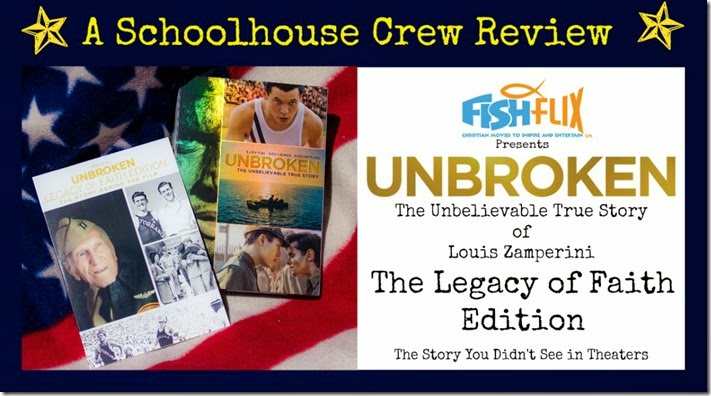 I was recently given the opportunity to watch and review the  Legacy of Faith Edition of Unbroken on DVD currently being sold by FishFlix.com. I knew this would be a review I wanted to be involved in.

On December 10th, 2012, Edwards Air Force Base had a very special visitor. The 95-year-old World War II aviator and American hero, Louis Zamperini, as well as his son Luke, arrived on base to give a very
motivating speech to the men and women stationed here.  As he sat in a comfy leather chair on the stage of the base theater, he spoke of his career as a skilled runner and of 1936 Berlin Olympics and attracting the attention of Adolf Hitler (and of stealing a Nazi flag as a souvenir while there). He spoke of the 1943 mission where his B-24 went down in the Pacific Ocean killing 8 of 11 of the crew members. He spoke of the 47 of drifting more than 1,000 nautical miles, losing one of his fellow crash survivors, only to be captured by the Japanese Navy where he then became a Prisoner of War for 30 months. He spoke of the nightmares he had following his release and how his wife and Billy Graham led him to the faith that would ease his heart and those nightmares forever.  In speaking to the men and women of Edwards, Mr. Zamperini was the light on the lampstand, the Salt and Light to all those who could hear him. One of those men was my husband, who was inspired by what Mr. Zamperini had to say that day.  It was one of the last appearances that Louis Zamperini made – he passed away less than 6 months later.

When Angelina Jolie decided to produce the movie Unbroken, which is about the life of Mr Zamperini, I knew I was going to have very mixed feelings about it. Big Hollywood does absolutely no justice to any topics involving faith and God (ie: Noah).  While Unbroken is an amazing movie, many found it upsetting that Mr. Zamperini’s faith was basically hidden under a bushel. Hollywood would have you believe people don’t want to hear about stories of faith, they just want the exciting parts. But his faith in God was a huge part of who Mr. Zamperini was.  Thankfully, FishFlix.com sells this movie as “The Legacy of Faith Edition” – the original Hollywood production with an additional 90 minute DVD that tells the rest of the story.

For those unfamiliar with FishFlix, they are an online retailer for Christian and Inspirational movies.  FishFlix's goal is to provide quality Christian entertainment that can be watched by families without being worried about questionable content or ideas/beliefs that disagree with those who follow Christ. The company was started over a decade ago by Turkish Christian Dr. Enis Sakirgil who originally wanted Christians in the West to know about the Biblical histories of Turkey.  Since that time, FishFlix has evolved into selling more mainstream Christian movies.

One of the first things I did notice was on the cover of the DVD was a notice that said "This edited version contains material different from the original theatrical version" and that this particular version was Not-Rated. After reading some information on Commonsensemedia.com , I noted that the original version was rated PG-13 and had some mild profanity. I then sent an email to FishFlix.com, asking if they knew the difference between the two.  A very friendly reply was received in a timely manner letting me know that ", but found that some of the words had been silenced and the bare buttocks scene had been blurred." I found FishFlix.com's customer service to be quick and friendly in regards to my question and did not feel as if my email as a bother to them.

While I don't want to give away any details of this movie and spoil it, I will say that this is an amazing movie and should not be skipped.    A large portion of the movie takes place in a Japanese POW camp and shows images of torture - this might be something to consider if letting your children view it and earlier scenes show the killing and mutilation of a shark and albatross.  I would say that it is appropriate for viewing by a mature 13 year old or older.  I watched it with my 15 year old daughter and was comfortable with her watching it and felt she took a lot away from the viewing.

The 90 minute Legacy video is the real gem to this package.  The interview of Pastor Greg Laurie with  Louie Zamperini will leave you in stitches. Well advanced in his years at the time of the interview (and my husband pointed out was wearing the same windbreaker and hat as when he saw him), you can tell Mr. Zamperini was still very sharp and spry.  Hearing this story in his own words is amazing and I was glad to get to hear it - while not quite as neat as my husband hearing it first hand, this was still a real treat..

"This is the first time I've been to Edwards. It's a place I've always wanted to visit. The people were fantastic and it was an amazing opportunity to see all the airplanes. This day was a special gift, a dream come true," he said about the experience.

That day, Mr Zamperini inspired my husband and my husband, who maintains the F-22 in this picture, was honored to give back just a small bit in return.

Mr. Zamperini’s light will indeed be missed but thankfully the combination of Unbroken and the Legacy of Faith Edition DVD set from FishFlix will insure that his light will not be hid under a bushel or forgotten for the generations to come. . 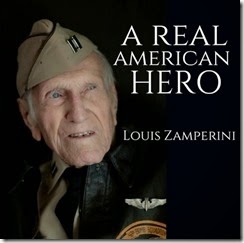 RIP Louis Zampini -  b, January 26, 1917 – d. July 2, 2014
Let your light shine before men in such a way that they may see your good works, and glorify your Father who is in heaven
Matthew 5:16
The Unbroken 2-DVD Legacy of Faith Edition can be purchased on the FishFlix website for  $18.97. Sign up for FishFlix's newsletter and receive a 10% off coupon for your purchase.

Posted by Brenda Prince at 4:23 AM